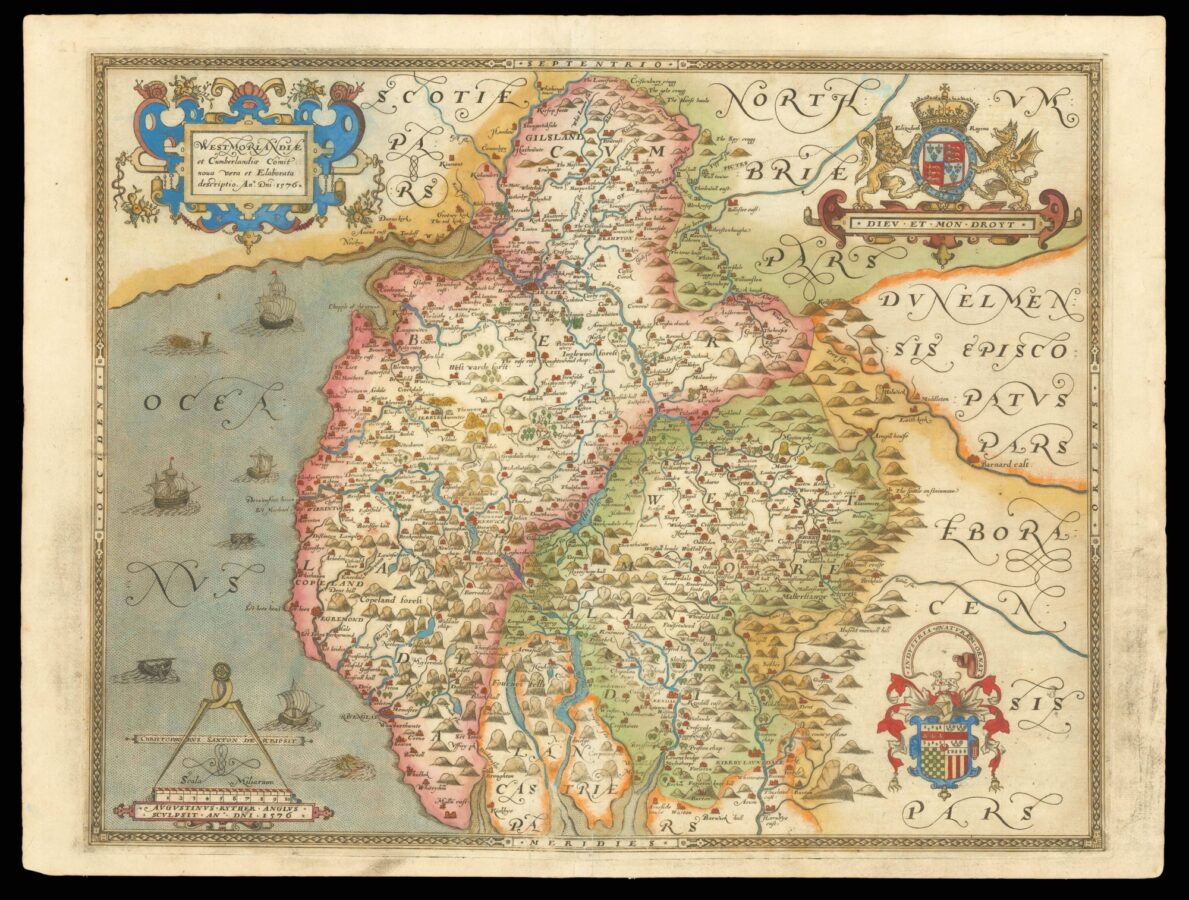 The first printed map of Westmorland and Cumberland

In the sixteenth century Westmorland and Cumberland, now part of the larger Cumbria, were independent counties, surveyed together here on the first map to show either county. It forms part of the series of maps which Christopher Saxton was commissioned to produce by the Queen’s Privy Council in 1755. Four years later the results were collected into the first nation atlas, his ​‘Altas of England and Wales’. The two regions are distinguished in colour, but many of the illustrations representing their geographical features straddle the counties’ border, such as hills, rivers, and even one bridge. The hills shown here are larger in general than those found on Saxton’s other county maps, and while they are not drawn to scale, their larger size attests to the significance of the Pennines, which run mainly along Westmorland’s Western border. A far smaller hill towards Cumberland’s coastline features a rare beacon, although the cartographer failed to note its name. The area in the South East of the county is characterised by the dense collection of lakes and rivers, including Lake Windermere and the small island in the centre of the River Derwent. On the sea itself, there are depictions of Elizabethan galleons, fish and sea-monsters, as typically found in all of Saxton’s maps of coastal regions. The ever-present threat of naval attack during the period meant that these maps are expressed in far greater detail than those of the inland counties.

The four corners of the map contain the features common to all 34 of Saxton’s county maps. In the upper left corner, an elaborate cartouche contains the Latin county names. The royal coat-of-arms is featured in the upper right, with the Seckford family crest directly below it, accompanied by its later Latin motto. In the lower left corner, the map’s scale is found, along with two banners identifying Saxton as the cartographer and Augustine Ryther, an English engraver as the craftsman behind the copper plate, with which the map was produced. The maps of Durham, Gloucestershire and Yorkshire are also attributed to him, all created in 1577. Additionally, like all the maps in Saxton’s ​‘Atlas of England and Wales’, this map bears his watermark, a bunch of grapes, to identify the work as original.