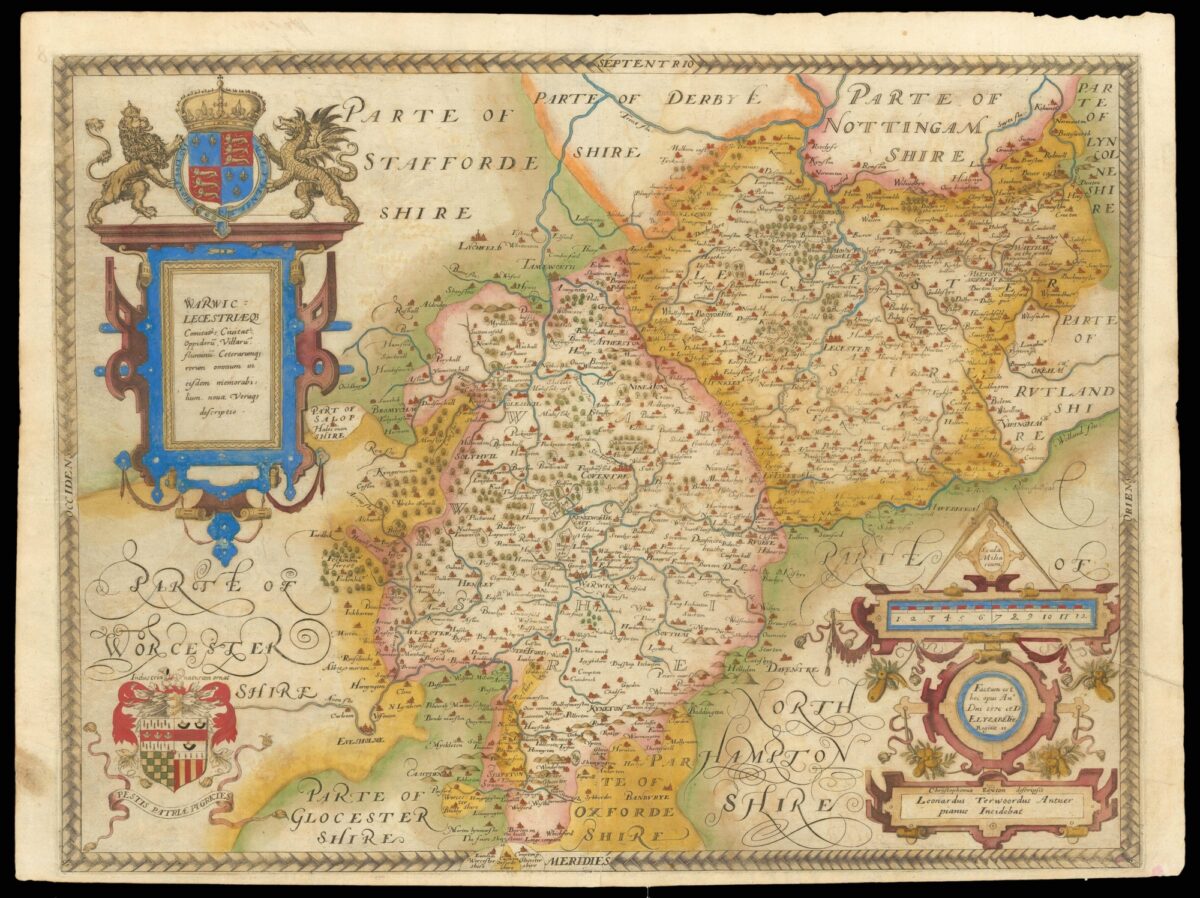 The first printed map of Warwickshire and Leicestershire

Warwickshire and Leicestershire are found together on the first map to ever show each county, as surveyed by Christopher Saxton. In 1576 the cartographer received the patronage of courtier Thomas Seckford and the authority of the Queen’s Privy Council to map the settlements and landscape of England and Wales, a task that resulted in the first national atlas, his ​‘Atlas of England and Wales’. The Trent and Avon both feature prominently across the surveyed area, with their many bridges also illustrated. Along these rivers are found some of the counties’ major towns and cities, such as Leicester, Rugby, Henley and Stratford (here ​‘Stretford’), the birthplace of Shakespeare. Such variation in the spelling of place names can be attributed to their distinct sixteenth century forms, but in some cases may simply be errors, since Saxton relied on information received verbally from locals. The map also expresses the natural landscape of the counties, with the hills along Warwickshire’s southern border representing the topmost area of the Cotswolds. Surprisingly, however, the area marked as Bosworth is noticeably devoid of any hills, including that on which Richard III stationed his army before battle in 1485. This map is unusual for Saxton’s county maps in that it includes a labelled road, Watling Street, along with the typical forests, estates and settlements that feature on all 35. It may be that Watling Street was significant due to its position on the county border, which may have been important for defensive or administrative purposes.

A grand cartouche dominates the upper left corner of the map, containing the county names in Latin and surmounted with the royal coat-of-arms flanked by the English lion and Welsh dragon. Below this a smaller coat-of-arms is featured, the heraldic crest of Thomas Seckford with both of the family’s Latin mottos. In the opposite corner another elaborate cartouche contains details of the map’s dating, and a banner identifying Saxton as the cartographer and Leonard Terwood as the engraver. Above these is found the scale, ornamented in greater detail than on the majority of Saxton’s county maps. Additionally, like all the maps in the ​‘Atlas of England and Wales’, this map bears Saxton’s watermark, a bunch of grapes, to identify the work as original.