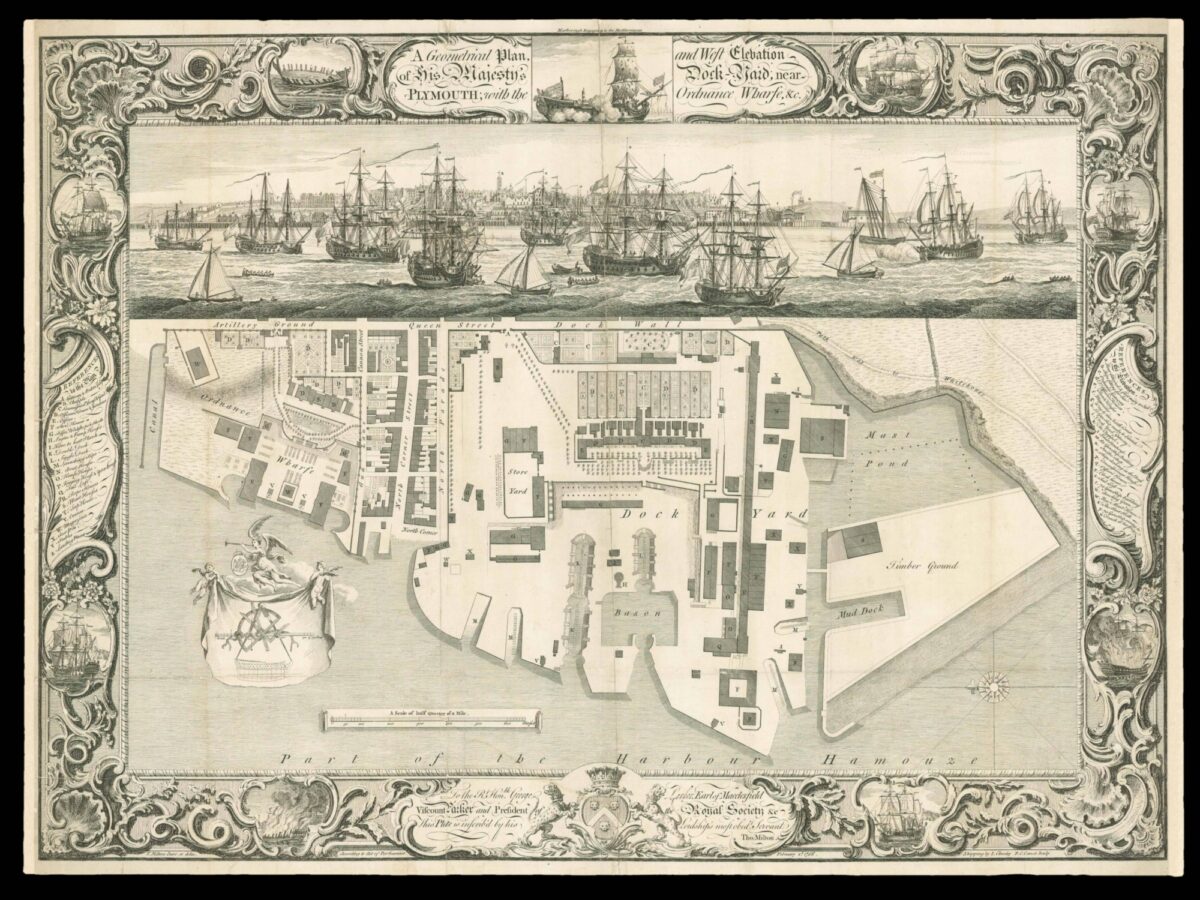 The first printed map of the Royal Dockyard at Plymouth

A Geometrical Plan, and West Elevation of His Majesty’s Dock Yard, near Plymouth; with the Ordnance Wharfe, &c.

This rare plan is one of a series of views of the Royal Dockyards, as surveyed and engraved by Thomas Milton in 1756. This series includes plans of the dockyards at Plymouth, Portsmouth, Chatham, Sheerness, Deptford and Woolwich, and were the first comprehensive and uniform printed maps of the Royal Dockyards.

When the French forces defeated the Anglo-Dutch fleet off Beachy Head in 1690, the British government were alerted to the need for better naval provisions. They therefore voted to build 27 men-of-war, as well as to construct a new dockyard at Plymouth, where these vessels would be harboured. Plymouth had become increasingly important as France replaced Holland as Britain’s major rival, and was chosen as a strategic base where the British Navy could rendezvous for campaigns across the Channel. By the mid-eighteenth century, the Royal Dockyards had become the largest industrial complex in the world, and the country’s greatest investment. The town that grew around the dockyards was originally known as Plymouth Dock, but locals protested at this cursory name and finally, in 1824, their petition to King George IV was accepted, and the area re-named Devonport.

At the dockyards in Plymouth, ships were repaired, built and prepared for conflict. These activities are represented here by the shipwright’s tools, shown on the banner in the lower left corner of the plan. The engraving is, in many ways, as orderly, efficient and rational as the dockyard itself. The key in the left margin corresponds to the buildings, infrastructure and mooring places shown on the aerial plan. Above the plan, a large horizontal vignette shows a naval engagement, which appears to be between English and French ships, according to the key in the right margin. This image is surmounted by a smaller vignette of ​“Marlborough engaging in the Mediterranean”, and within the elaborately decorated borders, eight further illustrations depict ships undergoing manoeuvres, such as ​“laying two”, or suffering disasters, i.e. ​“burnt to the waters edge”. These images suggest that this engraving was designed as a decorative piece, as much as a source of information. The imprint along the lower edge of the plan credits a ​“T. Milton” as the surveyor and engraver behind the print. And yet, remarkably, the engraver Thomas Milton can only have been 14 or 15 years of age at the time of its completion. The son of a marine artist, John Milton, it is likely that Thomas was assisted by
his father in bringing his view of the Royal Dockyards to publication. Indeed, the plan of the Chatham Dockyard identifies ​“I. Milton” as its author. Alongside the two Miltons, the shipwright John Clevely the Elder was responsible for the illustrations of ships on three of the six prints. He spent most of his working life at the Royal Dockyard in Deptford, and eventually turned to painting rather than building boats he saw there. The present plan is dedicated to George Parker, the second Earl of Macclesfield; although he was president of the Royal Society from 1752, there is no obvious connection between Macclesfield and the Plymouth dockyard. Instead, the dedication can be taken as evidence of the importance of the patronage system in eighteenth century British cartography, as well as in art and science in general. This plan is extremely rare: we have been able to trace only two institutional examples, at the British Library and Cambridge University Library, and only one on appearing at auction in the last 30 years.