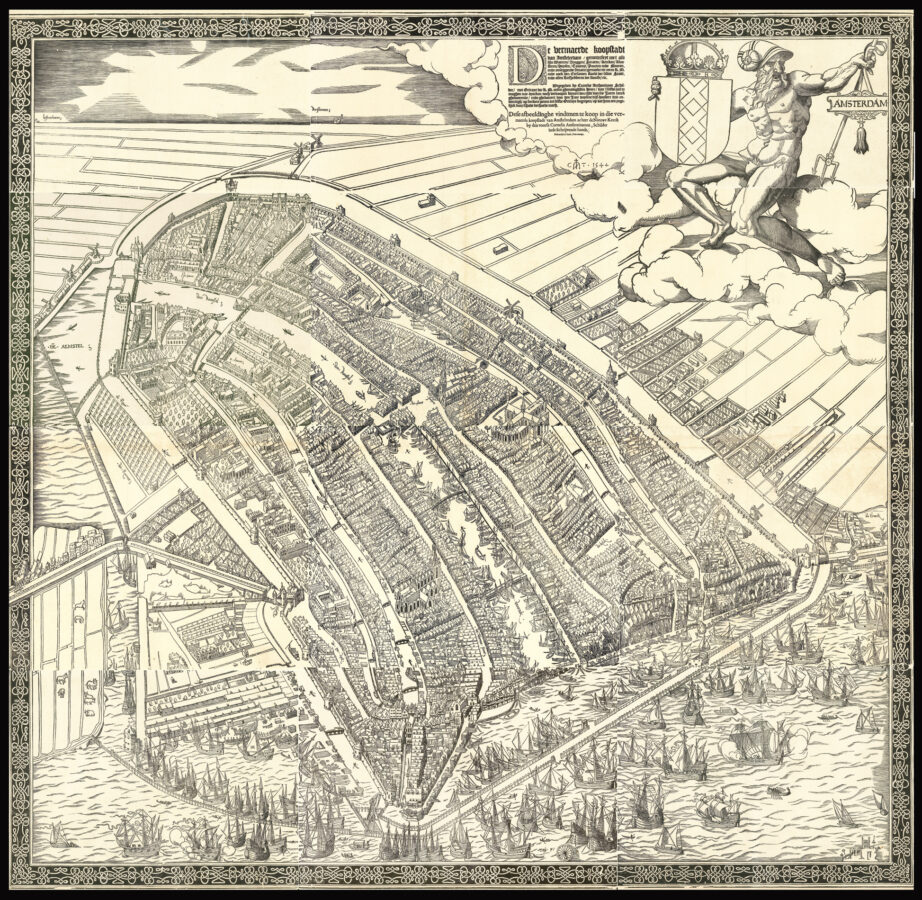 The first printed map of the city of Amsterdam

Bird’s-eye View of Amsterdam, first printed in Amsterdam in 1544, 4th edition, printed by Jan Janszoon (1558–1629 Text in the cartouche in the upper right:

(The famous merchant city of Amsterdam/​represented with all its waters/​bridges/​streets/​churches/​monasteries/​houses/​towers/​gates and walls/​and surrounding situation/​made to the glory of our Royal Highness and also the honorable council of the said city/​and all art-lovers/etc.

Published by Cornelis Antonizoon Painter/​with the Privilege granted by our gracious Lord the Royal Highness/​not permitting any reprinting or selling of the same within the timespan of six years/​dating from the year thousand fivehundred three and forty/​incurring with the same Privilege certain penalties [for infringement]/ so that thus he may be protected from any harm.

This depiction is to be found for purchase in the famous merchant city of Amsterdam behind the Nieuwe Kerck at the aforementioned Cornelis Anthoniszoon, Painter in the Writing Hand/​And now at Jan Jansz. Print-Printer)

The first printed plan of Amsterdam.

Cornelis Anthonisz (1499‑c. 1557) was a distinguished cartographer and painter, and official topographical artist to the Holy Roman Emperor. In 1538 he made a painting of Amsterdam, which he published in 1544, with his monogram and date visible under the letterpress text. It is a bird’s eye view taken from an imaginary vantage point over the harbour, looking southwards.

Anthonisz’ depiction was the source for plans of the city for the next seventy years, while his original blocks remained in circulation for over 110 years; all printings are rare: no example of the original printing of 1544 can currently be located; of this fourth state, which bears the publication line of Jan Jansz. (father of Johannes Janssonius), Karrow records only three institutional locations.

The only change Jansz. made was to reset the letterpress depiction, so this printing faithfully captures Amsterdam as it was in 1544, before the construction of the outer ring of canals, and celebrates the city’s proud maritime heritage, the title supported by a large figure of Poseidon and the foreground dominated by all manner of shipping.

The map shows the city of Amsterdam in the early decades of the sixteenth century, facing south, before the construction of the semi-circular ring of canals. It is bordered by the IJ, the Singel, a stretch of river Amstel, in the west and the Kloveniersburgwal and Gelderse Kade in the east. The waterway in the middle is labelled here ​“Den Amstel” in the South and ​“Damrack” in the North.

The map as such does not only give an impressive view of the topography of the city and its canals and buildings, but it abounds in detail to represent a thriving commercial hub that owes its tremendous wealth to merchants and seafarers, as can be concluded from the number of ships approaching and leaving the port and canals.

It is certainly not by accident that this map resembles the famous bird’s-eye view of Venice, composed in 1500 by Jacopo de Barbari. The angle at which Amsterdam is shown, the waters and canals dividing the urban districts from each other, and also including an ancient Roman deity such as Neptune, the god of the waters, all imply that Cornelis was familiar with this incredible example of Renaissance printmaking. In any case, it must have suited the commissioners of the original painting, the council of Amsterdam to present their flourishing city as Venice of the North to Charles V and also to those who could afford a print of the map to express their local pride.

Cornelis Anthoniszoon’s map became famous and very popular soon after it was first published in 1544, so that it continued to be printed in, probably, six editions until the seventeenth century. So far, no example of the first edition is known. We only know of the first edition from an account given by Johann David Passavant in the third part of his book Le Peintre-graveur (1862), where he describes a copy from the private collection of professor Joseph Martin von Reider (1793–1862) in Bamberg/​Germany. This map was already untraceable for A.E. d’Ailly in 1934, when he compiled his Catalogus van Amsterdamsche Plattegronden, and it turns out that von Reider’s collection was dispersed already from 1858, when von Reider donated major parts of it to the Bavarian state. Today, neither the Staatliche Graphische Sammlung nor the Bayerisches Nationalmuseum in Munich can trace this map in their collections, although they had acquired major parts of von Reider’s print collection in 1920. It is possible that it must be counted among the losses of WW2. Subsequent editions can be distinguished from earlier ones by the number of wormholes in the woodblocks, but, above all, from the modified texts in the cartouche in the upper right. Spellings were reviewed already for the second edition, and in how far the third edition differed from the second, is not yet clearly established. However, d’Ailly assumed in 1936, that ​“Ian Iansz” who is mentioned as printer on the fourth edition, only added his name to the text of the cartouche, after he had taken over unsold prints of the third edition from Cornelis Anthoniszoon’s widow. The sixth edition was printed by Manuel Colijn, probably between 1636–1664. The date of 1544, when the map was first printed, remains prominent in all editions, probably to pay tribute to its inventor, who is mentioned in the cartouche throughout.

​“Cornelis is celebrated for is talents as painter, draftsman and printmaker… Yet indivisible from these practices was the Amsterdam-born artist’s longtime preoccupation with mapmaking. Trained by his father in the art of engraving, Cornelis was the first printmaker to utilize that medium to chart the seas, at the time the primary conduit for trade in the Dutch Republic. In 1543 he published the Caerte van Oostland, a handbook based on both personal observations and reports from sailors that mapped the sailing route from Amsterdam to the Baltic, and which discussed the instruments and methods for surveying uncharted waters. During the time he was compiling the Caerte, Cornelis undertook the parallel project of documenting the territory contained within the Dutch borders, and in particular his native city of Amsterdam. A series of pen-and-ink studies — each a small-scale meditation on the topography of Amsterdam — culminated in 1538 in a monumental painted map, for which the municipal government awarded the artist thirty-six gulden, and which received pride of place in that city’s Stadthuis (town hall). That painting, the oldest surviving plan of Amsterdam, fuses the artist’s expertise in survey techniques with his knowledge of the science of perspective. Six years later, Cornelis produced the map on view here, which translates the Stadthuis painting with minor alterations into the woodcut medium. He printed the map using twelve woodblocks, whose assembled sheets comprise an area of more than one square meter. The View of Amsterdam bristles with information about the city at midcentury. It depicts not only momments of civic and religious significance, but also less conspicuous sites such as bridges .… houses, yards, ports, and walls, many identified with inscriptions and each rendered with the microscopic attention to detail characteristic of Netherlandish painting of the time. Livestock and neatly partitioned swaths of land — the motors of an earlier economy — coexist with well-maintained roads, canals, and scores of multi-masted ships decked along the Amstel River, signposts pointing to Dutch prosperity. Cornelis’s map provides a window into Amsterdam at a time when modern progress jostled with the city’s late-medieval past. As with its painted predecessor, the city itself is the subject of the image: it is shown virtually without people. A bearded allegorical figure representing Amsterdam perches on a solid mass of clouds in the upper right. Clutching a trident in his left hand and propping the heraldic crest of Amsterdam on his leg, the figure, who closely resembles Neptune (the Roman god of the sea), watches vigilantly over the calm waters that usher a golden age of trade into the city. In the impression exhibited here, Cornelis or an associate has added color washes, which dramatize the effect of shadows cast by clouds, and which inject a local flavor that uncolored versions of the View could not, as in the use of red pigment on the tiled roofs and brick buildings. The View of Amsterdam achieved immediate success and was reprinted well into the seventeenth century. Circulated and collected widely, this map advertises not only Amsterdam’s advances in scientific knowledge, but also the prodigious talents of its local artists and its growing commercial prosperity — claims demonstrated, respectively, by the map’s method of construction, its form, and its content.” Quotation from Exh. cat: Prints and the Pursuit of Knowledge in Early Modern Europe. Harvard Art Museums and Block Museum of Art. Ed. by Susan Dackerman. Cambridge/​Mass. 2011, cat. no. 87, pp. 348f.

Rare. We are not aware of any other example coming up for sale in the past 40 years. We are unable to trace an example of the map in the United States. Karrow lists 7 known complete, and two incomplete, examples of the various states of the map. They are as follows: