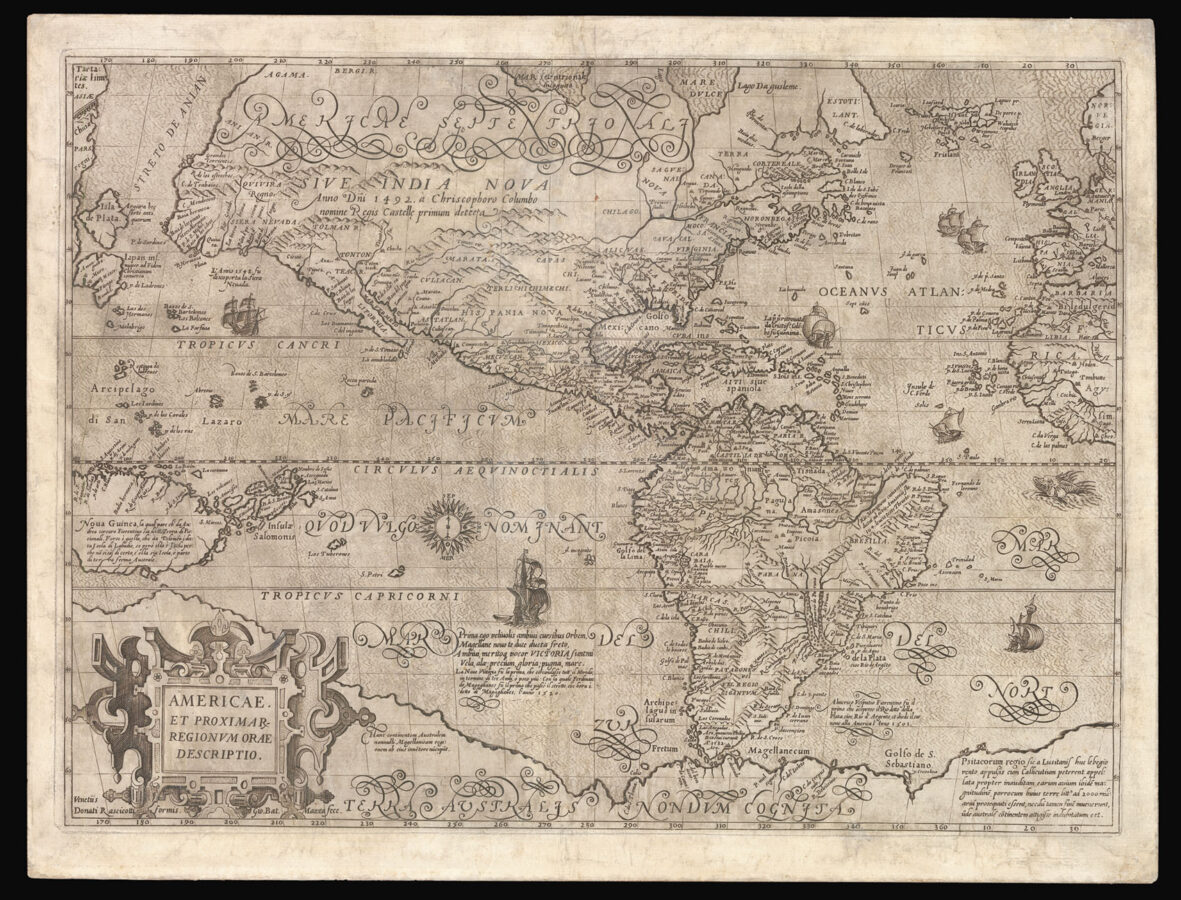 The first printed map of the Americas to show Roanoke Island, and the fourth to name Virginia

The first printed map of the Americas to show Roanoke Island, and the fourth to name Virginia.

The most notable aspect of this map is the naming of an island, off the east coast of North America, ​‘Roanoae’ (i.e. in reference the Roanoke Colony) the first attempt by the English to form a permanent colony the New World. The ill-fated colony was settled on Roanoke Island (situated in modern day Dare County on the Outer Banks of North Carolina) in 1585. Due to poor planning, lack of supplies, hostile native tribes, and the Spanish Armada, the colonial endeavour was a disaster, and in the summer of 1590, when the then governor John White returned with fresh supplies, he found the colony completely deserted; thus ending England’s first attempt to colonise the New World. Although previous maps such as Hakluyt’s ​‘Novus Orbis’ (1587), Boazio’s ​‘The Famouse West Indian voyadge…’ (1589), and Hogenberg’s ​‘Americae et Proximarum’ (1589) had marked Virginia, Mazza’s map is the first to correctly name the colony.

Although undated Burden suggests that Mazza published the work in late 1589, due to the fact that the map bears great similarity to Frans Hogenberg’s ​‘Americae et Proximarum…’ of the same year. Furthermore the placement of the nomenclature suggests that the Mazza came later. For instance, the location of ​‘La Grand Canaria’ on the Hogenberg led Mazza to forget to engrave the ​‘Canaria’. ​‘Lago Da golesme’ is abandoned half way through engraving it, and begun again elsewhere, because of the lack of space due to the excessive flourishing on the words ​‘Americae Septentrionali’.

Little is known about Govanni Battista Mazza an engraver working in Venice at the end of the sixteenth century. He is know to have engraved a magnificent world map for Giuseppe Rosaccio in 1597, and the present map is part of a set of the four continents.