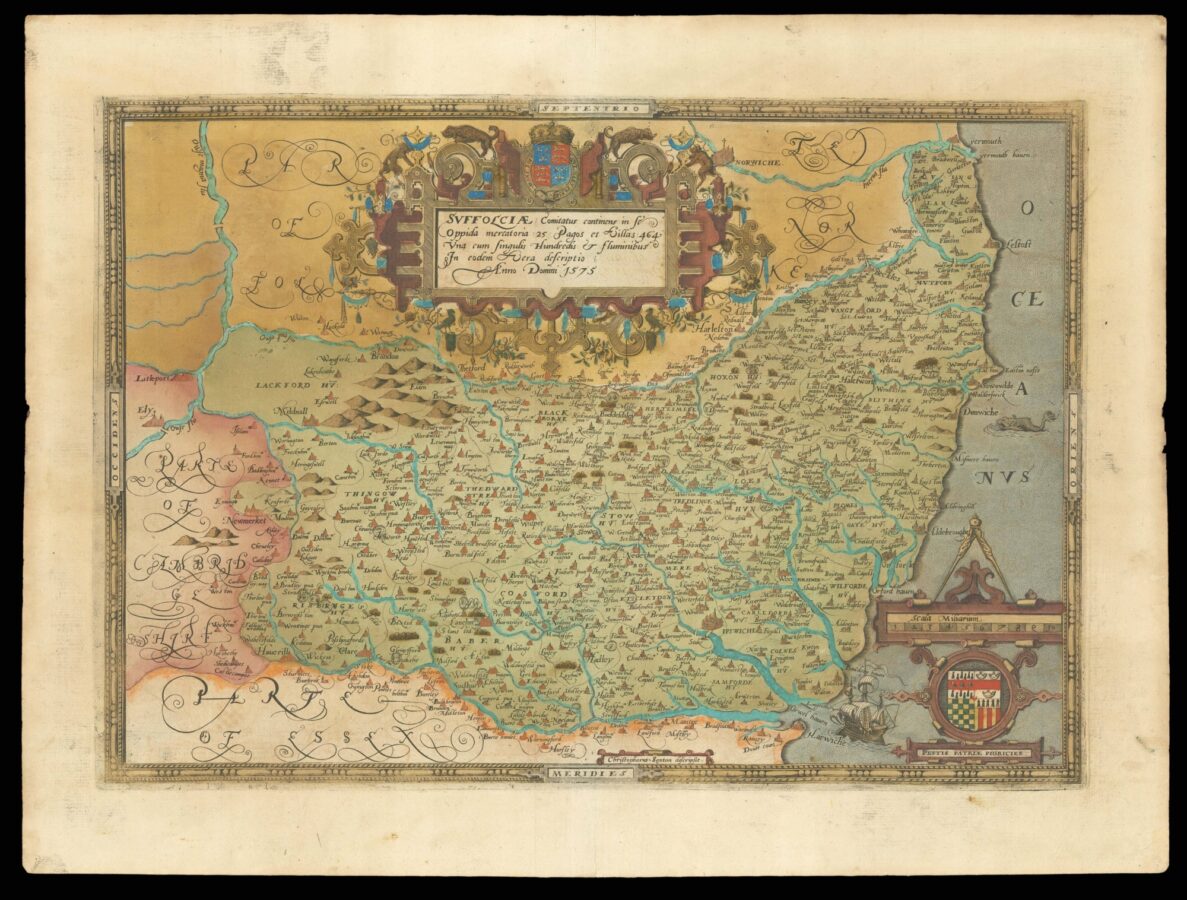 The first printed map of Suffolk

In 1575, Christopher Saxton was authorised by the Queen’s Privy Council to survey and map the counties of England and Wales, a task which he had completed by 1579, when the resulting maps were compiled and published in his seminal ​‘Atlas of England and Wales’. As part of this task, he created this map of Suffolk, the first map ever to be printed of the county. As one of the earlier maps in his Atlas of England and Wales, Suffolk is here shown divided into ​‘hundreds’, or administrative districts. These would have allowed the government to use the map as a tool in managing distant areas of the country. Similarly, Saxton’s maps contained information important for defensive strategy, used by the Secretary of State, Lord Burghley, to makes plans in case of conflict. For this reason, coastal regions receive particular attention, being vulnerable to attack by sea. In fact, Burghley’s personal proof copy of the Suffolk map was heavily annotated by hand with notes relating to naval fortifications. On the other hand, the galleon and sea-creature illustrated in the ocean attest to the decorative co-purpose of Saxton’s maps.

Inland, the map features the rivers, hills, woodlands and settlements of Suffolk, including the city of Ipswich, represented by a small but intricate collection of buildings, complete with turrets and Church spires. Nearby, Woodbridge is identified, the seat of the Saxton’s patron, Thomas Seckford. It is in this county too that Saxton himself held land, granted to him by Elizabeth I for his ​‘survey of divers parts of England’, according to Gardham.

A large, ornate cartouche dominates the upper central portion of this map, containing the Latin county name, along with a record of the number of merchant towns, estates and rivers within Suffolk, and surmounted by the royal coat-of-arms. This cartouche replicates a design found in Clément Perret’s 1569 publication on calligraphy, the ​‘Exercitatio Alphabetica’, engraved by Nicholas de Hooghe, who also worked on several of Saxton’s maps. While the name of the engraver who created the copper plate of Suffolk is not detailed on the map, it is known to have been Lenaert Terwoot, and a banner on the lower border of the map identifies Saxton as the cartographer. To the right of this, the map’s scale sits above the Seckford family crest, complete with its early Latin motto. Additionally, like all the maps in Saxton’s ​‘Atlas of England and Wales’, this map bears his watermark, a bunch of grapes, to identify the work as original.