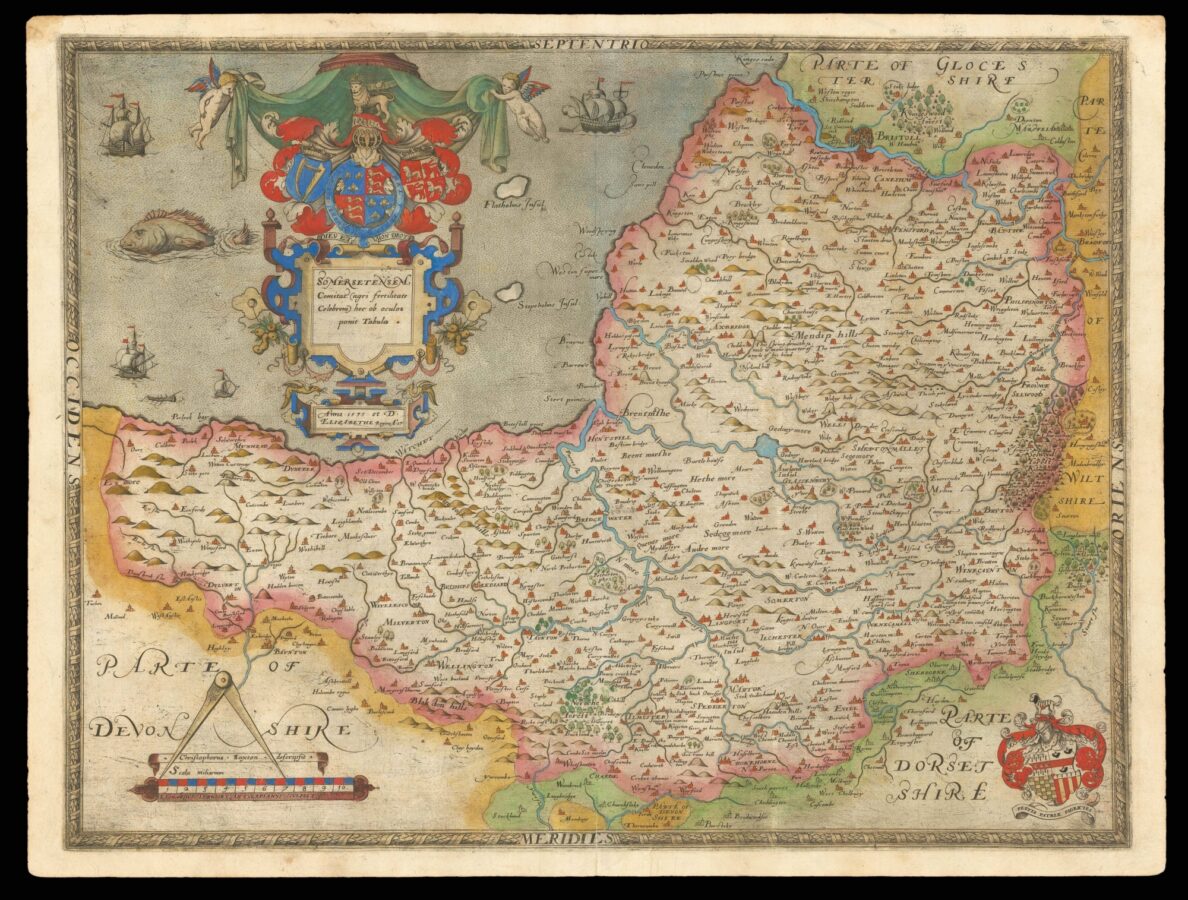 The first printed map of Somerset

In 1575, Christopher Saxton was authorised by the Queen’s Privy Council to survey and map the counties of England and Wales, a task which he had completed by 1579, when the resulting maps were compiled and published in his seminal ​‘Atlas of England and Wales’. Included in it was this, the first map of Somerset ever produced, presenting the landscape and settlements of the county in full. The various features of the land, its rivers, hills and woodlands, are represented pictorially and labelled with their English names, sometimes with added details, such as the series of three windmills found atop the hills in the centre of the map, and information, the note that ​“this spring driveth 12 mils within one quarter of a myle of his head”, for example. Out at sea, Flat Holm and Steep Holm islands are marked, albeit inaccurately in location and shape, while inland, the city of Bristol dominates North Somerset. Across Saxton’s atlas, the dense collection of buildings which represent Bristol are paralleled only by London, attesting to the importance of the city, which was visited by Queen Elizabeth the previous year, where a mock battle staged between the allegorical figures of War and Peace. Across the border in Wiltshire, Longleat Estate is represented by a small enclosure, due to the fact that its renovation and expansion was a work in progress during the late 1570s. Within the county, other notable estates such as Castle Cary and Evercreech Lodge, are similarly represented and labelled.

Alongside the galleons, boats and huge fish that adorn the sea to the North West of Somerset, Saxton has included an elaborate cartouche, flanked by putti and majestically illustrated in bold red, blue and green. This contains the Latin county name, with the royal coat-of-arms presented above it, surmounted by a crowned lion. The map also features another coat-of-arms, that of Saxton’s patron, Thomas Seckford, in the lower right corner, complete with his family’s earlier Latin motto. On the opposite side, the map’s scale is presented, accompanied by two banners identifying Saxton as the cartographer and Leonard Terwoort as the engraver. Tertwoort was a Flemish craftsman who worked alongside other engravers to produce the 35 copper plates from which the ​‘Atlas of England and Wales’ was printed. Additionally, like all the maps in the atlas, this map bears Saxton’s watermark, a bunch of grapes, to identify the work as original.