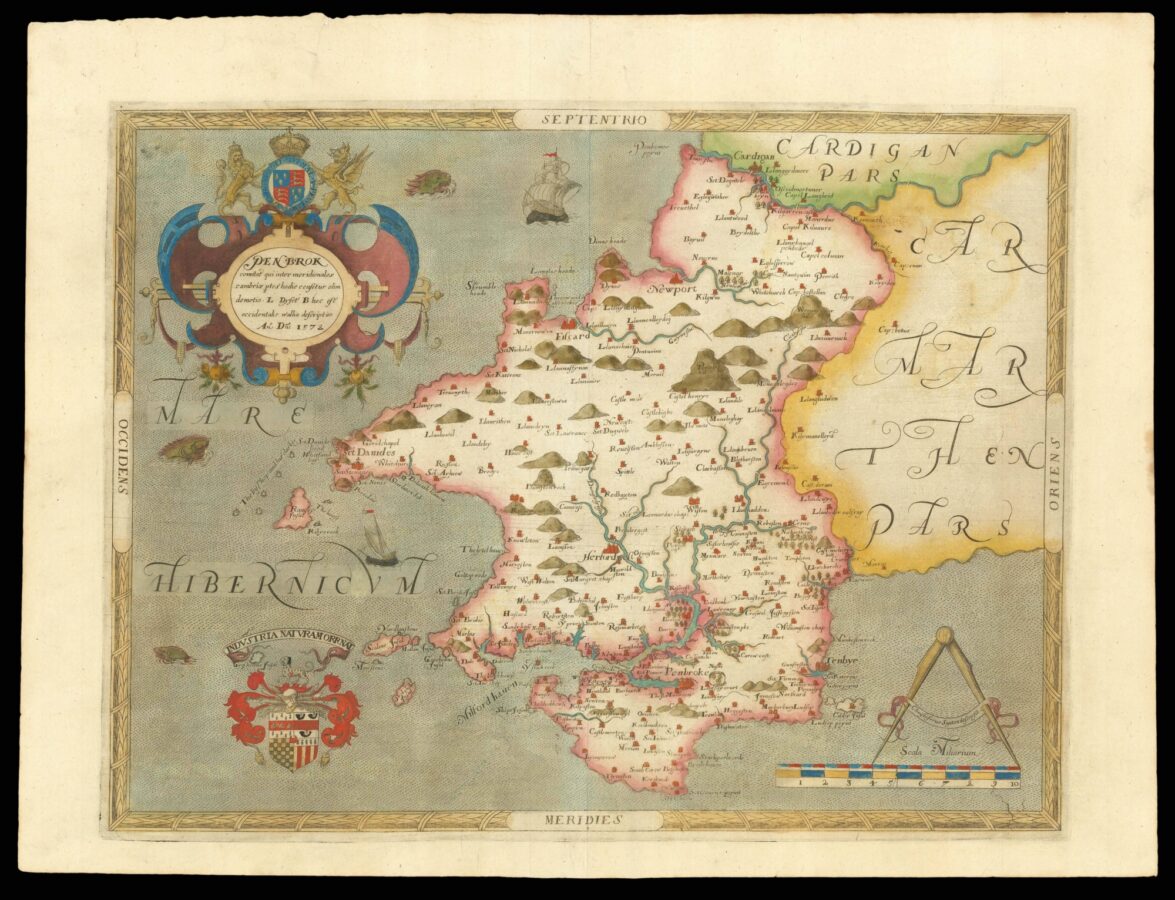 The first printed map of Pembrokeshire

In 1575, Christopher Saxton was authorised by the Queen’s Privy Council to survey and map the counties of England and Wales, a task which he had completed by 1579, when the resulting maps were compiled and published in his seminal ​‘Atlas of England and Wales’. Included in the Welsh section of the atlas is this map of Pembrokeshire, the first map of the county ever to be produced. After the 1536 Act of Union, Wales was officially incorporated into the Kingdom of Henry III, and for the rest of the Tudor period, the country largely benefitted from the increased trading opportunities that emerged. What had been smaller settlements grew into major towns, such as Tenby, Haverfordwest, Pembroke, Newport and St Davids, all of which are represented here as a collection of buildings. Saxton also records many of the smaller villages that populated the county, as well as expressing the landscape with illustrations of its rivers, hills and woodlands, albeit in less detail that the majority of the English county maps. For defensive reasons, the coastal areas receive greater attention, including the small islands a little way off the Welsh shore. It has been suggested that Pembroke was of particular significance as the closest part of the Kingdom to Ireland, for which reason it has been designated its own map while certain other counties are combined together. Indeed, the personal copy of this map owned by the Secretary of State, Lord Burghley, contains hand-written annotations around the coastal regions, indicating that these areas were of greater concern.

The upper left corner is dominated by a bold cartouche, surmounted by the royal coat-of-arms flanked by English lion and Welsh dragon, and containing the Latin county name. Below this in the lower corner, the Seckford family crest with its later Latin motto pays tribute to Saxton’s patron, Thomas Seckford. On the opposite side, the map’s scale is entwined with a banner identifying Saxton as the cartographer. Unusually, the engraver is not named, but it is likely to have been one of the craftsmen listed on another of Saxton’s maps, since there is no evidence that the cartographer himself was responsible for the production of the copper plates. Additionally, like all the maps in Saxton’s ​‘Atlas of England and Wales’, this map bears his watermark, a bunch of grapes, to identify the work as original.