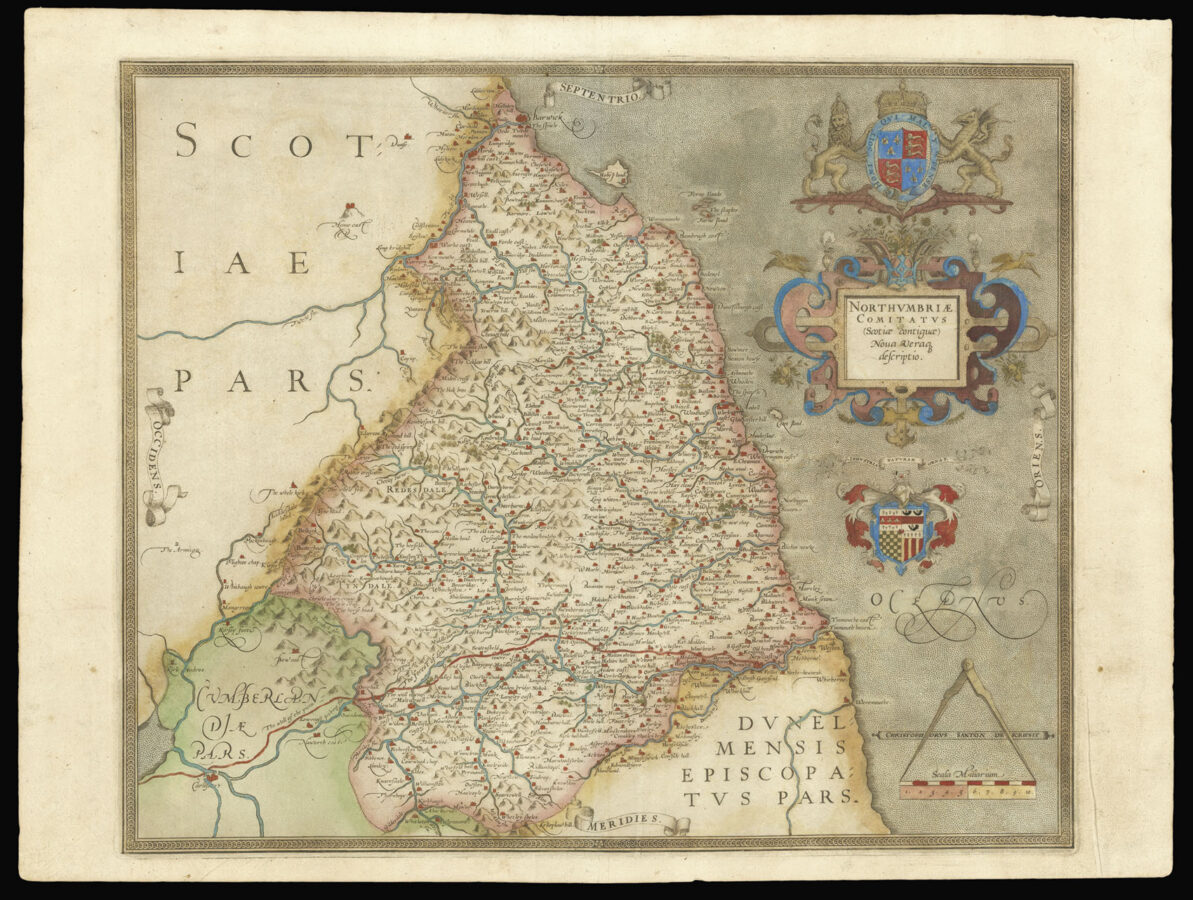 The first printed map of Northumberland

In 1575, Christopher Saxton was authorised by the Queen’s Privy Council to survey and map the counties of England and Wales, a task which he had completed by 1579, when the resulting maps were compiled and published in his seminal ​‘Atlas of England and Wales’. It included this map of Northumberland, the first map of the county ever to be printed. It depicts the landscape and settlements of the region in great detail, notably including Hadrian’s Wall, listed as ​‘the wall of the Picts’, as a bold red line running from Newcastle across the county, into Cumberland and past Carlyle, although it is surprisingly absent from the separate map of Cumberland itself. It is the only such feature of its kind to appear on Saxton’s maps, which are generally limited to the illustration of hills, rivers and settlements. The high degree of attention with which Saxton documents the castles, estates and towns of Northumberland can be attributed to the county’s vulnerable position on the border with Scotland and the coast. During the reign of Elizabeth I, England was at constant risk of attacks by both sea and land. For this reason, numerous Scottish settlements are also highlighted, including the prominent Hume Castle, at which Mary, Queen of Scots, stayed in 1566. One key purpose of Saxton’s commission was to produce a tool with which the Secretary of State, Lord Burghley, could strategise in the case of conflict. The annotations on his own personal proof copy of this map list the ​‘names of ye principall lorsh[ips] in ye Middle march’, written densely by hand around the Anglo-Scottish border. Alnwick in particular, as the seat of Earl Henry Percy, a Catholic sympathiser, is expressed on the map with particular prominence, attesting to its political purpose.

Most of the common emblems found on Saxton’s maps are featured on the right side of the map, with the royal coat-of-arms in the upper corner, directly above an elaborate cartouche enclosing the county name in Latin. Below this the Seckford family crest appears with its later Latin motto, and in the lower corner the scale is accompanied by a banner identifying Saxton as the cartographer. Omitted, however, are the name of the engraver and the date of the map. This is the only one of the 35 county maps not to include a date. whereas the copper plates of some other counties continued in existence for centuries, the original plate used to make this map had been lost by 1689, along with that of Devon. Additionally, like all the maps in Saxton’s ​‘Atlas of England and Wales’, this map bears his watermark, a bunch of grapes, to identify the work as original.