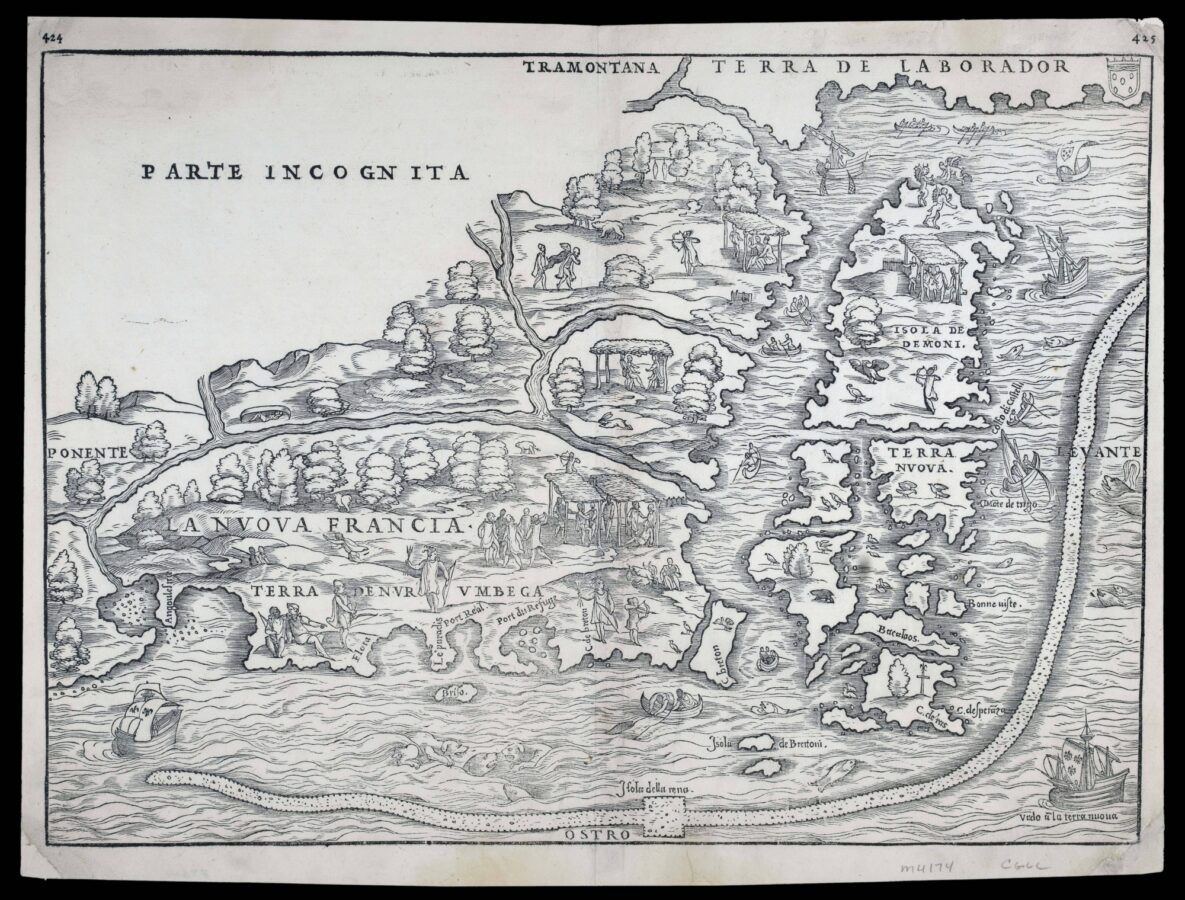 The rare first state of Ramusio’s map of New England and New France, produced by Giacomo Gastaldi for the third volume of Ramusio’s highly important work, ​‘Delle Naviagtioni et Viaggi.’ It is the earliest printed map devoted to the region, and is also the first map to use the term ​‘New France’.

Gastaldi’s map is largely based on the voyages of Cartier and Verrazzano. The Hudson River, the St. Lawrence River, and the islands near the Gulf of St. Lawrence are the most prominent features, along with a curious snake-like projection in the Atlantic Ocean that has been the subject of much speculation. It is probably an attempt to depict the Grand Banks, but it has also been suggested that it is the Gulf Stream. The depiction of the area between New York Harbour and Narragansett Bay is based on the voyage of Verrazzano in 1524. The area around New York Harbour, shown here as a peninsula, is named Angoulesme. The large bay to the east of New York Harbour is probably Jamaica Bay, which was more open to the ocean at that time. Long Island, which Verrazzano thought was a peninsula, is labelled Flora. The Hudson River is shown joining the St Lawrence — an assumption that Verrezzano and Cartier’s rivers were connected.

This map is the work of Giacomo Gastaldi (c1500-1565), described by Burden as ​“Cosmographer to the Venetian Republic, then a powerhouse of commerce and trade. He sought the most up to date geographical information available, and became one of the greatest cartographers of the sixteenth century”. He was, and styled himself, ​‘Piemontese’, and this epithet appears often after his name. Born at the end of the fifteenth or the beginning of the sixteenth century, he does not appear in any records until 1539, when the Venetian Senate granted him a privilege for the printing of a perpetual calendar. His first dated map appeared in 1544, by which time he had become an accomplished engineer and cartographer.
Karrow has argued that Gastaldi’s early contact with the celebrated geographical editor, Giovanni Battista Ramusio, and his involvement with the latter’s work, ​‘Navigationi et Viaggi’, prompted him to take to cartography as a full-time occupation. In any case Gastaldi was helped by Ramusio’s connections with the Senate, to which he was secretary, and the favourable attitude towards geography and geographers in Venice at the time.

Gotham in the Gilded Age