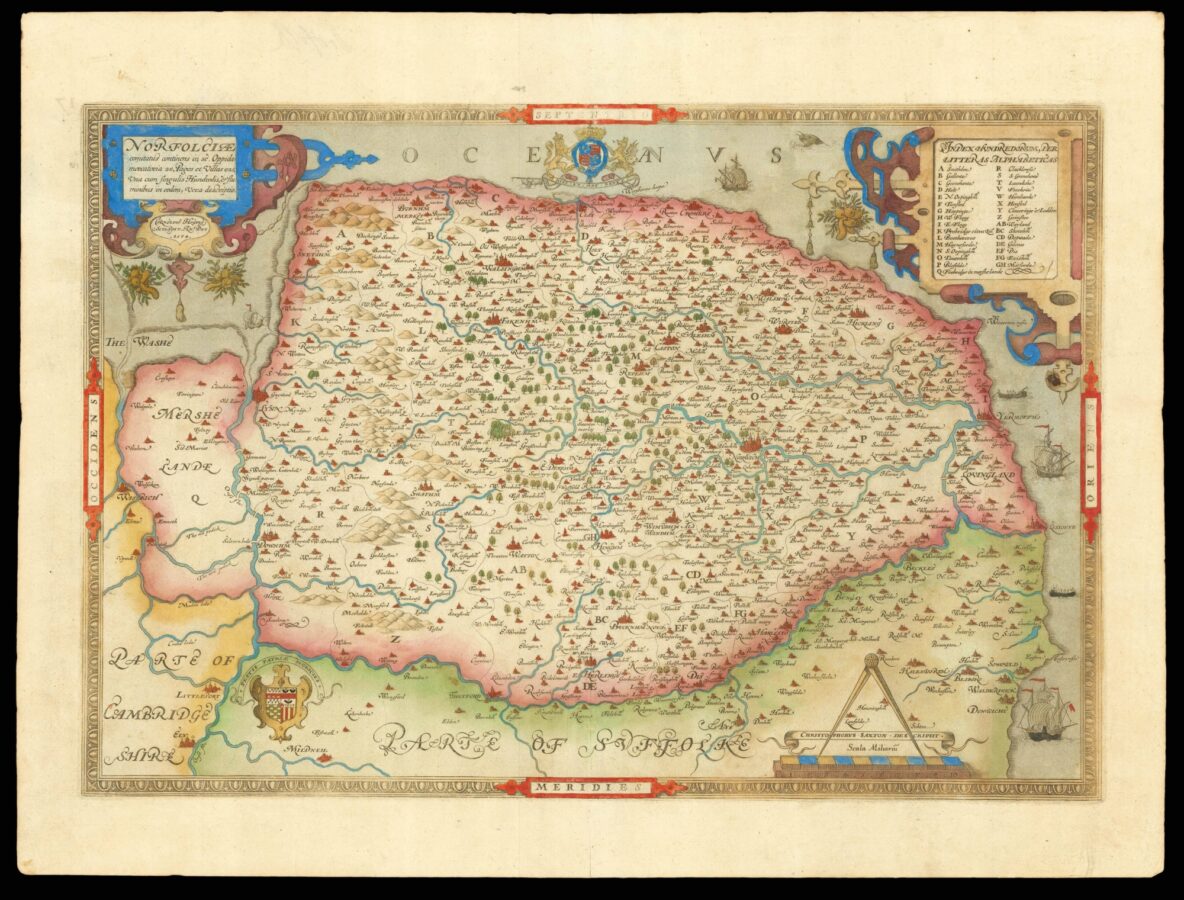 The first printed map of Norfolk

In 1575, Christopher Saxton was authorised by the Queen’s Privy Council to survey and map the counties of England and Wales, a task which he had completed by 1579, when the resulting maps were compiled and published in his seminal ​‘Atlas of England and Wales’. According to Barber, the earliest of Saxton’s county maps, and certainly the earliest map of Norfolk, the landscape and settlements of the county are recorded here in great detail, including small villages alongside larger towns and cities, most prominently Norwich, complete with a small but intricate illustration of its cathedral. Unlike Saxton’s later maps, the estates and grounds of local gentry are not represented here, and the county’s woodland areas are far more sparse. Nevertheless, the cartographer still depicts the major and minor rivers with their bridges, along with the hills that run down the West of the county and the ​‘Mershe Lande’ towards the border with Cambridgeshire. Uniquely, he also includes a key in the upper right corner with corresponding to the administrative units into which the county was divided. It is one of only four maps to show their counties divided into ​‘hundreds’ in this way. Alongside its function as an administrative tool, this map was designed to be used by the Secretary of State, Lord Burghley, for his defensive strategies in case of a naval invasion. For this reason, the coastal areas receive particular attention and the ocean itself is ornamented with grand Elizabethan galleons (as well as one questionable sea creature). Although intended for such purposes, there is evidence that Saxton’s map of Norfolk was also used by the Queen’s officials in planning the royal party’s route into the county.

As with all of Saxton’s maps, the royal coat-of-arms features prominently, presented here at the head of the map. To its left, an elaborate cartouche with bold blue colouring contains the Latin county name, a record of the number of merchant towns, estates and rivers found throughout Norfolk, and the name of the engraver, Cornelis de Hooghe. While other engravers are responsible for a number of the county maps collected in Saxton’s ​‘Atlas of England and Wales’, this is the only one for which de Hooghe is credited. In the lower left corner is found the Seckford family crest with its early Latin motto, in honour of Saxton’s patron, Thomas Seckford, and on the opposite side, the map’s scale is accompanied by a banner identifying the cartographer. Additionally, like all the maps in the atlas, this map bears Saxton’s watermark, a bunch of grapes, to identify the work as original.