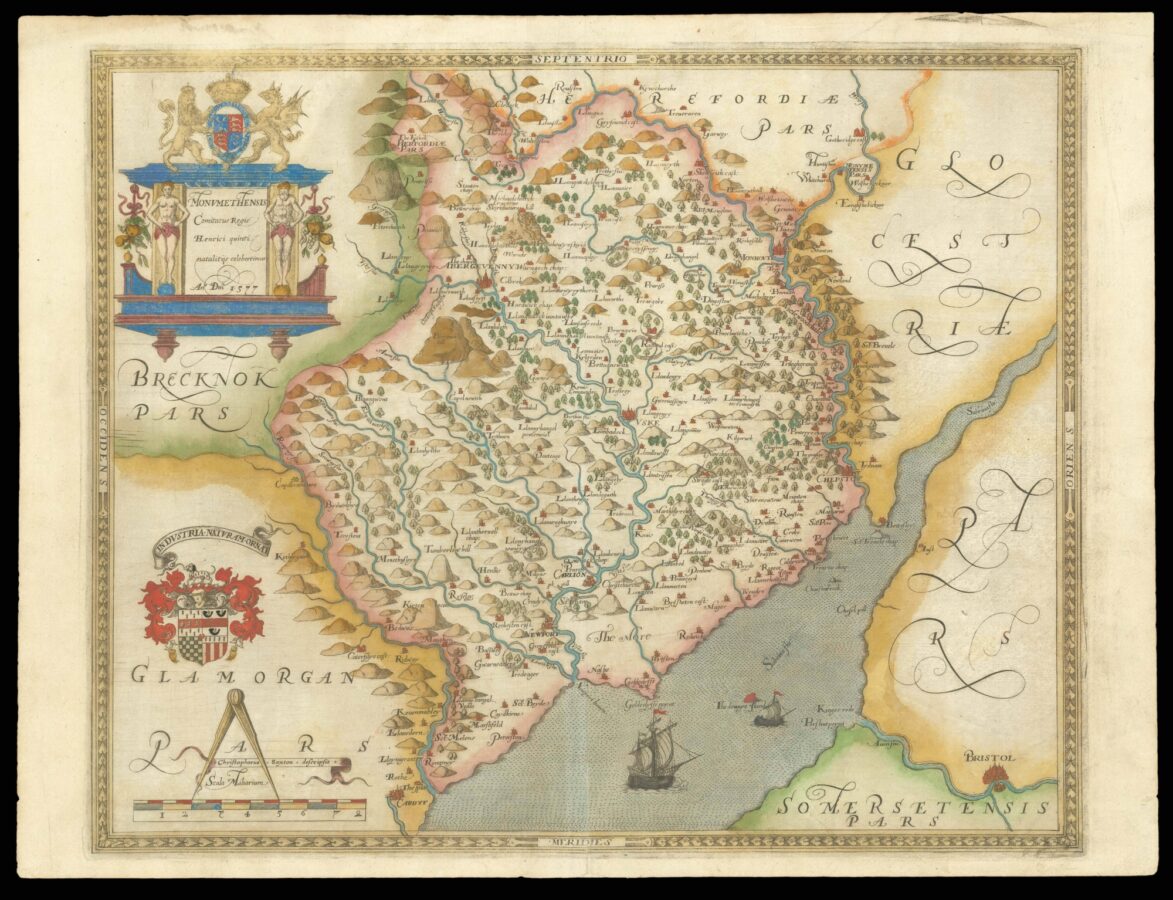 The first printed map of Monmouthshire

In 1575, Christopher Saxton was authorised by the Queen’s Privy Council to survey and map the counties of England and Wales, a task which he had completed by 1579, when the resulting maps were compiled and published in his seminal Atlas of England and Wales. The first map in the Welsh section of the atlas is of Monmouth, the first map of the county ever to be produced. On receiving his commission, the cartographer was issued a warrant, instructing ​“all Justices of the Peace, Mayors or others in Wales to see [him] conducted to any towre, castle, high place or hill, to view that county”. There was no similar edict made out to officials in the English counties, perhaps suggesting that Saxton may have anticipated some hostility from the Welshmen whose lands he was to examine. The cartographer was nonetheless able to record the settlements and landscape of Monmouthshire, depicted pictorially with illustrations of the county’s hills, rivers, woodlands, villages and towns. Abergavenny, Uske, Monmouth and Chepstow are the most prominent towns, while larger hills dominate the West side of the county. Small enclosures are used to depict the estates of the local gentry, a system that also explains the small enclaves of ​‘Welshe Bycknor’ and ​‘The Fothol’ separated from the main region to the North. The 1536 Act of Union allocated land based on its aristocratic ownership, and these two areas, later annexed to Herefordshire, were at this time in possession of Welsh nobles.

In the upper left corner a bold blue cartouche contains the Latin county name, surmounted by the royal coat-of-arms flanked by English lion and Welsh dragon. Beneath this the Seckford family crest is adorned with a banner enclosing the family’s later Latin motto. On the lower border of the map, the scale is accompanied by another banner identifying Saxton as the cartographer. The omission of the engraver’s name has led to some reports that Saxton himself was responsible for the creation of the copper plate, but there is no evidence to suggest that he took part in the engraving process himself. It is instead thought that credit for this should go to Augustine Ryther, part of the team of craftsmen who produced the copper plates of Saxton’s surveys. Alongside these elaborate features, the majestic Elizabethan galleons and ornate outer-frame attest to the ornamental value of this map. Additionally, like all the maps in Saxton’s ​‘Atlas of England and Wales’, this map bears his watermark, a bunch of grapes, to identify the work as original.