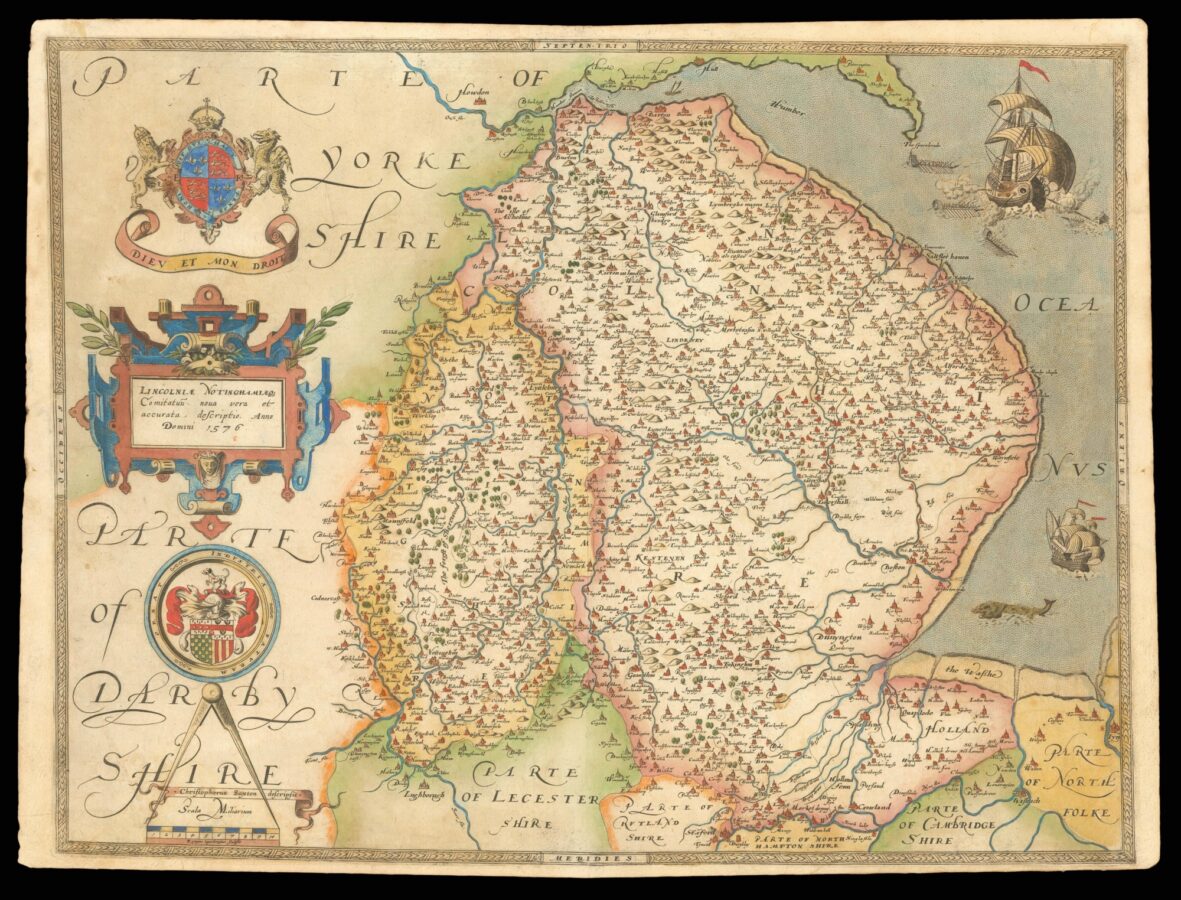 The first printed map of Lincolnshire and Nottinghamshire

In 1575, Christopher Saxton was commissioned by the Queen’s Privy Council to survey the counties of England and Wales, and eventually to compile the first national atlas, his ​‘Atlas of England and Wales’. This map formed part of that task, and was in fact the first printed map ever made of either Lincolnshire or Nottinghamshire. The elaborate design of these maps makes it clear that they had an ornamental purpose, but their primary use was as tools with which the Secretary of State, Lord Burghley, could make strategic defensive and administrative decisions. In fact, his own personal proof copies are covered in hand-written annotations, such as a sketch of a battlefield at the mouth of the Humber in Northern Lincolnshire. To fulfil this requirement, Saxton’s maps have a particular focus on vulnerable borders and coastal regions. The numerous inlets from ​‘The Washe’ estuary receive attention as potential points of attack, attesting to the map’s functionality, while the grand Elizabethan galleon illustrated on the sea simultaneously points towards its decorative purpose. Combined on this one map, Nottinghamshire is differentiated from its larger neighbour in a light yellow colour. Although less important from a military perspective, Saxton nevertheless presents the county in great detail, particularly its settlements and woodland areas, including the famous Sherwood Forest. Certain significant buildings are also labelled, such as ​‘the Lodge’ in the crown estate of Bestwood Park above Nottingham, and ​‘the manor’ at Worksop to the North, where Mary Queen of Scots had previously been held prisoner.

The four common features of Saxton’s county maps are found along the left side, with the royal coat-of-arms in the upper corner, complete with a large banner containing the monarch’s motto. Below this, the names of the counties, written in Latin, are held by an elaborate cartouche in bold blue colouring. The Seckford family crest sits below this, accompanied by its later Latin motto, in tribute to Saxton’s patron, Thomas Seckford. In the lower corner the map’s scale is found, alongside which banners identify Saxton as the cartographer and Remigius Hogenberg as engraver. Hogenberg was a prominent Flemish craftsman, who worked alongside Saxton’s team of engravers to produce the copper plates from which the maps were made. Additionally, like all the maps in Saxton’s ​‘Atlas of England and Wales’, this map bears his watermark, a bunch of grapes, to identify the work as original.