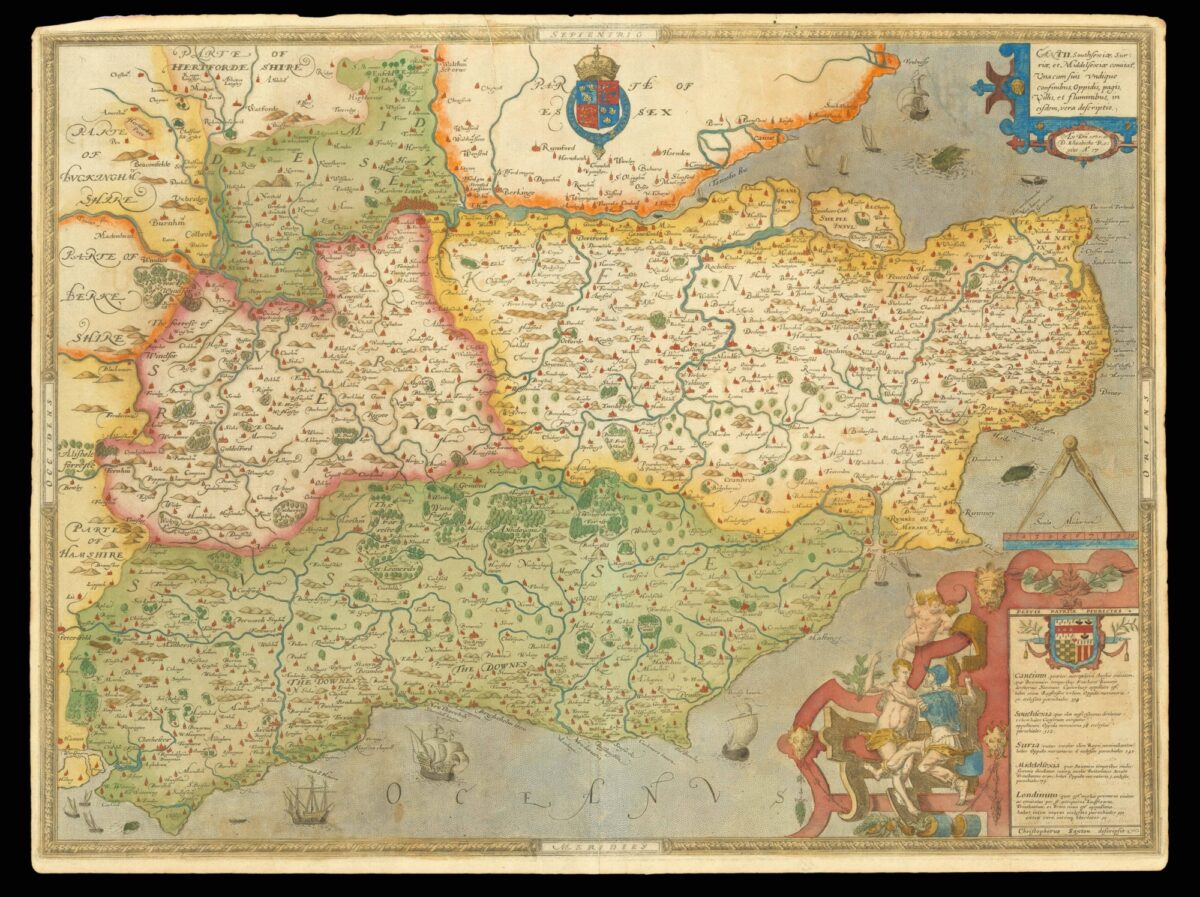 The first printed map of Kent, Sussex, Middlesex and Surrey

This map shows the first ever cartographic representations of each of its four counties: Kent, Middlesex, Sussex and Surrey. With royal authority granted by the Queen’s Privy Council, Christopher Saxton spent the late 1570s producing a series of 34 maps recording the landscape and settlements of the English and Welsh counties. These were eventually compiled into the first national atlas, his seminal ​‘Atlas of England and Wales’. Rivers, hills, estates, towns and cities are represented pictorially and labelled with their English name. These maps were not produced for the purpose of navigation, but rather as a record of information that could be used by the Queen’s officials in administrative and military planning. For this reason, England’s coastal and border regions generally receive more attention on Saxton’s map, making it strange that these potentially vulnerable counties are grouped together here; it has been suggested that such a design was implemented in order to economise on the cost of engraving. Despite the large area covered on the map, it nonetheless presents the counties in great detail, with prominent coastal areas such as Brighton, Hastings and Dover labelled in larger script. As expected, London stands out as a great mass of buildings, with St Paul’s Cathedral and London Bridge clearly discernible. The palaces at Hampton Court and Windsor are also featured. The Elizabethan ships and sea-creatures illustrated in the surrounding ocean attest to the ornamental co-purpose of the map.


The two right corners of the map both contain elaborate and boldly coloured cartouches, the upper containing the Latin county names and the map’s dedication to Queen Elizabeth I, and the lower exhibiting information about the number of merchant towns and Church parishes contained within each county. The Seckford family crest is found alongside this information, complete with its early Latin motto, in honour of Saxton’s patron, Thomas Seckford, as well as a banner along the bottom border naming the cartographer. The engraver is similarly identified in a banner below the map’s scale, showing that the copper plate was created by Remigius Hogenberg, a Flemish craftsman enlisted as part of Saxton’s small team of engravers. At the head of the map, the royal coat-of-arms is illustrated, boldly coloured in red and blue. Additionally, like all the maps in Saxton’s ​‘Atlas of England and Wales’, this map bears his watermark, a bunch of grapes, to identify the work as original.