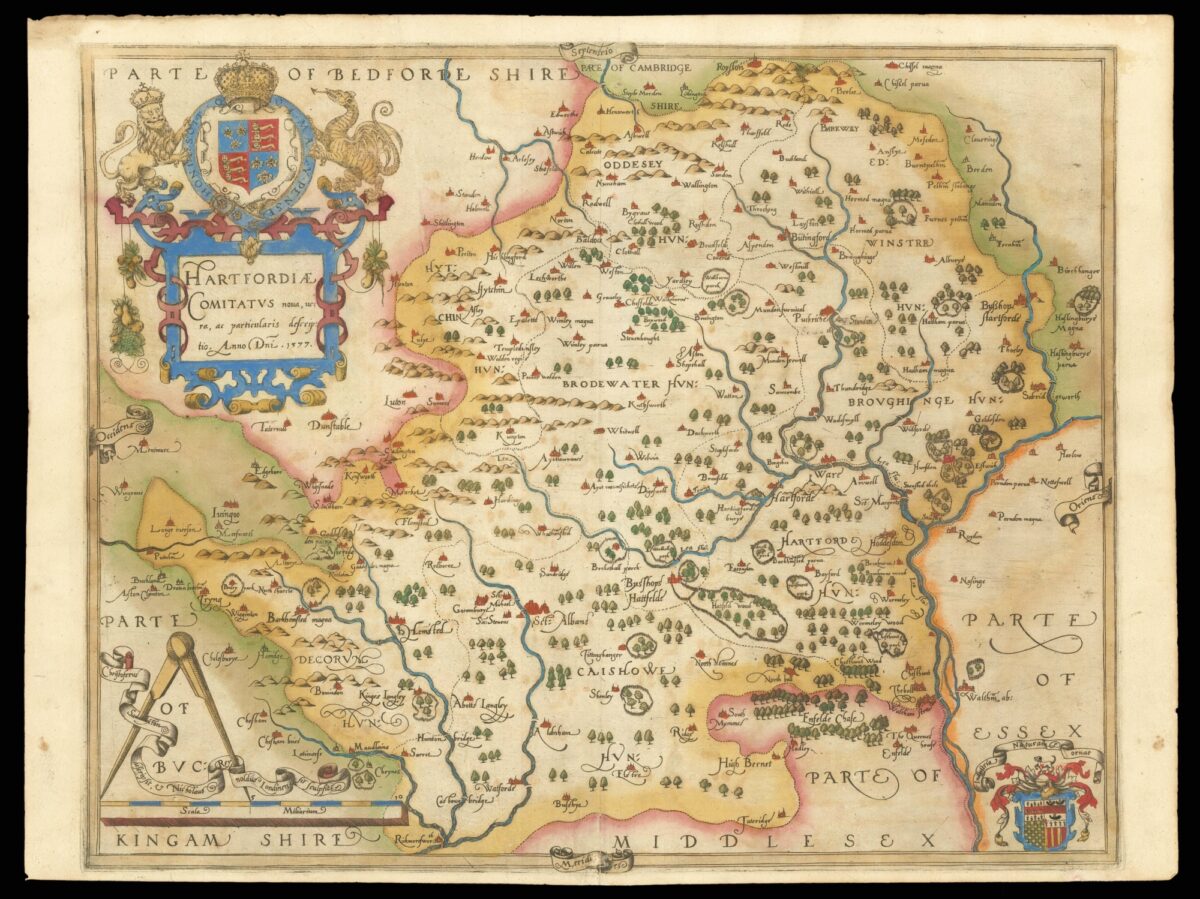 The first printed map of Hertfordshire

In 1575, Christopher Saxton was authorised by the Queen’s Privy Council to survey and map the counties of England and Wales, a task which he had completed by 1579, when the resulting maps were compiled and published in his seminal ​‘Atlas of England and Wales’. As part of this task, he created this map of Hertfordshire, the first map of the county ever produced. Astonishingly, he was able to complete the entire atlas within four years, using a small team and a variety of methods, such as perambulation, triangulation and observation, namely of the distances between Church towers and hilltop beacons. Although not always accurate in scale, the settlements and estates featured on the map are differentiated in size, with larger cities such as St Albans shown as a dense collection of buildings, while minor villages are denoted by a single building. The 26 deer parks illustrated on the map represent the estates of the gentry, important information for the Secretary of State, Lord Burghley, described as ​‘the most cartographically minded statesman of his time’. So keen was his interest in the development of these maps, that he wrote additions onto his personal proof copies by hand, specifically the names of certain influential inhabitants of Hertfordshire, for example, ​‘Mr Capell’ at Hadham Parva and ​‘Lytton’ at Knebworth.

On the left side of the map, an intricate cartouche in bold blue colouring contains the county name in Latin, and is surmounted by the royal coat-of-arms, as found on all of Saxton’s maps. Similarly, the heraldic crest of the Seckford family is found in the lower right corner, along with its later Latin motto, as a tribute to courtier Thomas Seckford, who is thought to have financed the production of the atlas. The opposite lower corner contains the map’s scale, around which is woven a banner identifying Saxton as the cartographer, and Nicholaus Reynold as the engraver. Such banners, found on many of his maps, attest to the craftsmanship of a team of English and Flemish engravers, who produced the copper plates with which the maps were printed. Additionally, like all the maps in Saxton’s ​‘Atlas of England and Wales’, this map bears his watermark, a bunch of grapes, to identify the work as original.