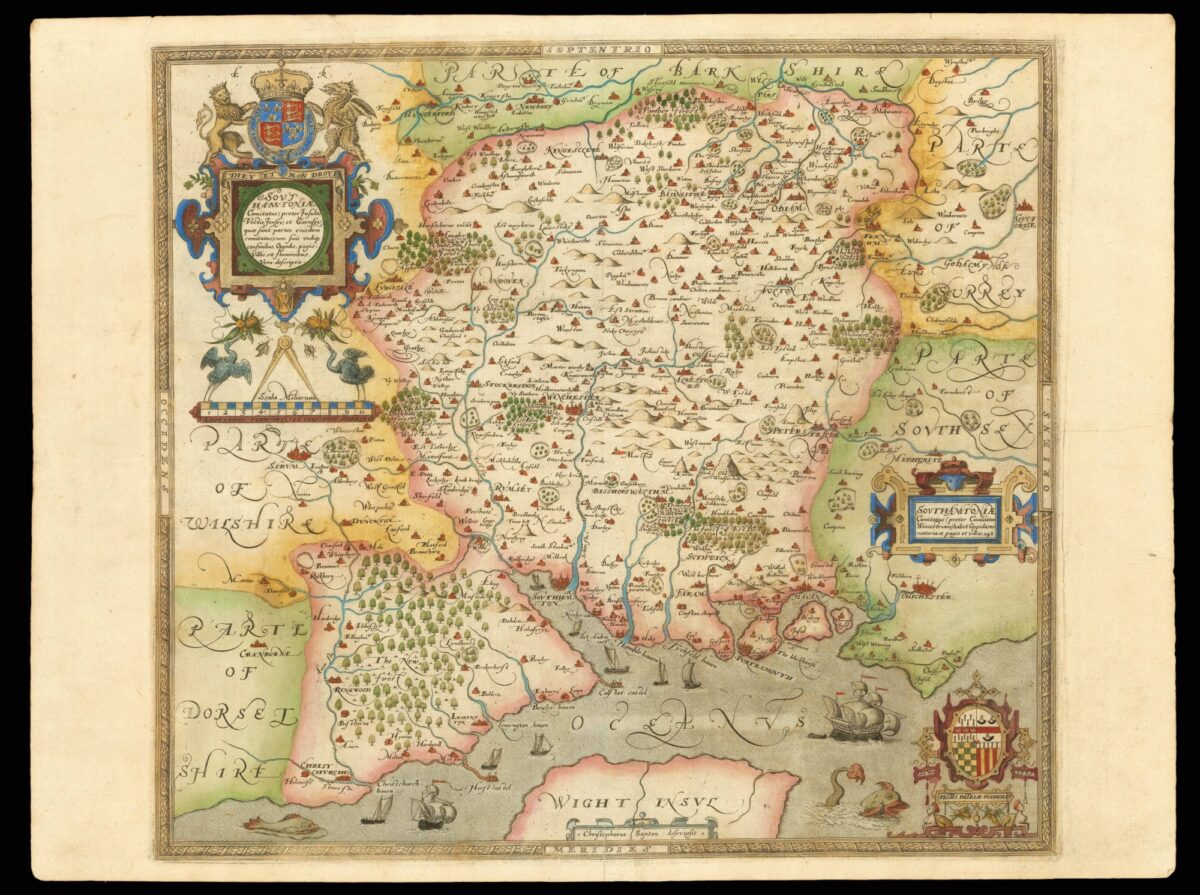 In 1575, Christopher Saxton was authorised by the Queen’s Privy Council to survey and map the counties of England and Wales, a task which he had completed by 1579, when the resulting maps were compiled and published in his seminal Atlas of England and Wales. This map of Hampshire, or ​‘Southamtonia’, presents the findings of Saxton’s survey, and is the first printed map of the county ever to have been created. The characteristic features of the county are depicted pictorially, with the mass of trees in the South West representing the New Forest, and the South Downs shown as a collection of hills in the centre. The city of Winchester is prominently expressed, with a small but intricate illustration of its cathedral, along with several bridges crossing the River Itchen. Saxton’s maps were designed both for ornamental purposes, as evidenced by the grand ships and questionable sea-creatures illustrated in the ocean, and to aid in administrative and defensive planning. For this reason, Hampshire’s many coastal inlets and rivers receive particular attention because of their importance in the case of a naval attack. Indeed, when the Spanish Armada approached in 1588, the beacons shown on the top of the coastal hills proved to be essential to the military in conveying information. While Saxton included certain significant features of the surrounding counties, the Isle of Wight, along the lower border is devoid of details beyond its Latin name. Such an omission is somewhat surprising given that John Rudd, to whom Saxton was apprenticed, had previously presented the Secretary of State, Lord Burghley, with a map of the island.

The map is ornamented with three elaborate cartouches, the most prominent containing the county name in Latin, surmounted by the royal coat-of-arms and motto, flanked by the English lion and Welsh dragon. Directly below this, the map’s scale is adorned with bold blue herons, and accompanied by a banner identifying Lanaert Terwoot as the engraver. On the right border of the map, a smaller cartouche contains information on the number of merchant towns and estates within Hampshire. In the lower right corner, the Seckford family crest is depicted with its early Latin motto, in tribute to Saxton’s patron, Thomas Seckford. To the right of this a small banner contains the name of the cartographer himself. Additionally, like all the maps in Saxton’s ​‘Atlas of England and Wales’, this map bears his watermark, a bunch of grapes, to identify the work as original.