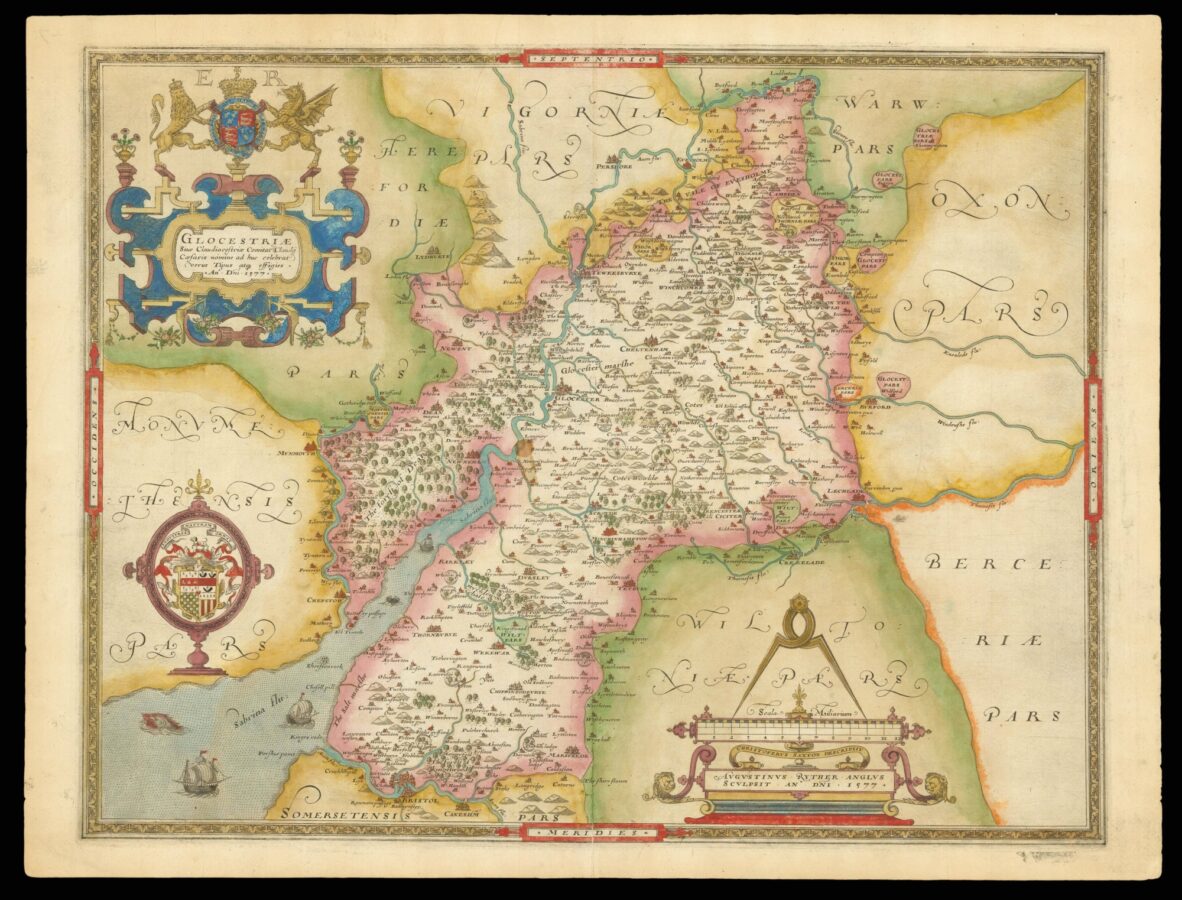 The first printed map of Gloucestershire

This map of Gloucestershire is the first map ever produced of the county, and was created by Christopher Saxton as part of his royal commission to survey the entirety of England and Wales. His findings were compiled in the first national atlas, his ​‘Atlas of England and Wales’, containing 33 other county maps in addition to Gloucestershire. The cartographer has depicted its forests, hills, cities, towns and rivers as small illustrations, each labelled with their name in English, while the surrounding counties are denoted by their Latin titles. Despite its location in the county of Somerset, Bristol is represented on the South border due to the significance of the city. Similarly, certain border towns and villages in Wales are depicted for defensive and administrative reasons. So too the settlements on the coast and along the banks of the River Severn are carefully recorded. In fact, on the personal copy held by Lord Burghley, the Secretary of State, annotations to this region point towards his concern of enemy attacks via these waterways.

Within the county, the most prominent cities are depicted as collections of buildings and spires, namely Gloucester, Cheltenham and Cirencester. The village of Hales, in the North of the county, came to be of significance for Saxton when he was called to testify at a legal case concerning the Abbey there. The cartographer was asked to swear an oath to affirm the accuracy of his survey, although the relevance of his map to the case goes unrecorded. The numerous hills that cover the central and Eastern parts of the county represent the Cotswolds, while the densely packed trees on its borders with Wales and Somerset express the Gloucestershire forests. Small enclosures are used to represent the estates of local gentry, although surprisingly the castle and land of the powerful Berkeley family are not included, even though Queen Elizabeth herself had previously stayed there.

Positioned in the upper left corner and surmounted by the royal coat-of-arms, a bold blue cartouche contains the county name in Latin, along with a reference to the Emperor Claudius, whose invasion led to the establishment of a great Roman colony in Gloucestershire, stationed there in order to deter attacks on England from the neighbouring Welsh tribes. Below this, another cartouche encloses the Seckford crest along with the family’s later Latin motto. Thomas Seckford was a central figure in Saxton’s commission, and is thought to have funded the entire project. On the opposite side, the map’s scale is found on the lower border on a bright red plinth. Two banners also identify Saxton as the cartographer and Augustine Ryther as the engraver. Together with these intricate features, the ornate outer-frame and the boats and sea-creatures illustrated in the ocean attest to the decorative function of the map. Additionally, like all the maps in Saxton’s ​‘Atlas of England and Wales’, this map bears his watermark, a bunch of grapes, to identify the work as original.