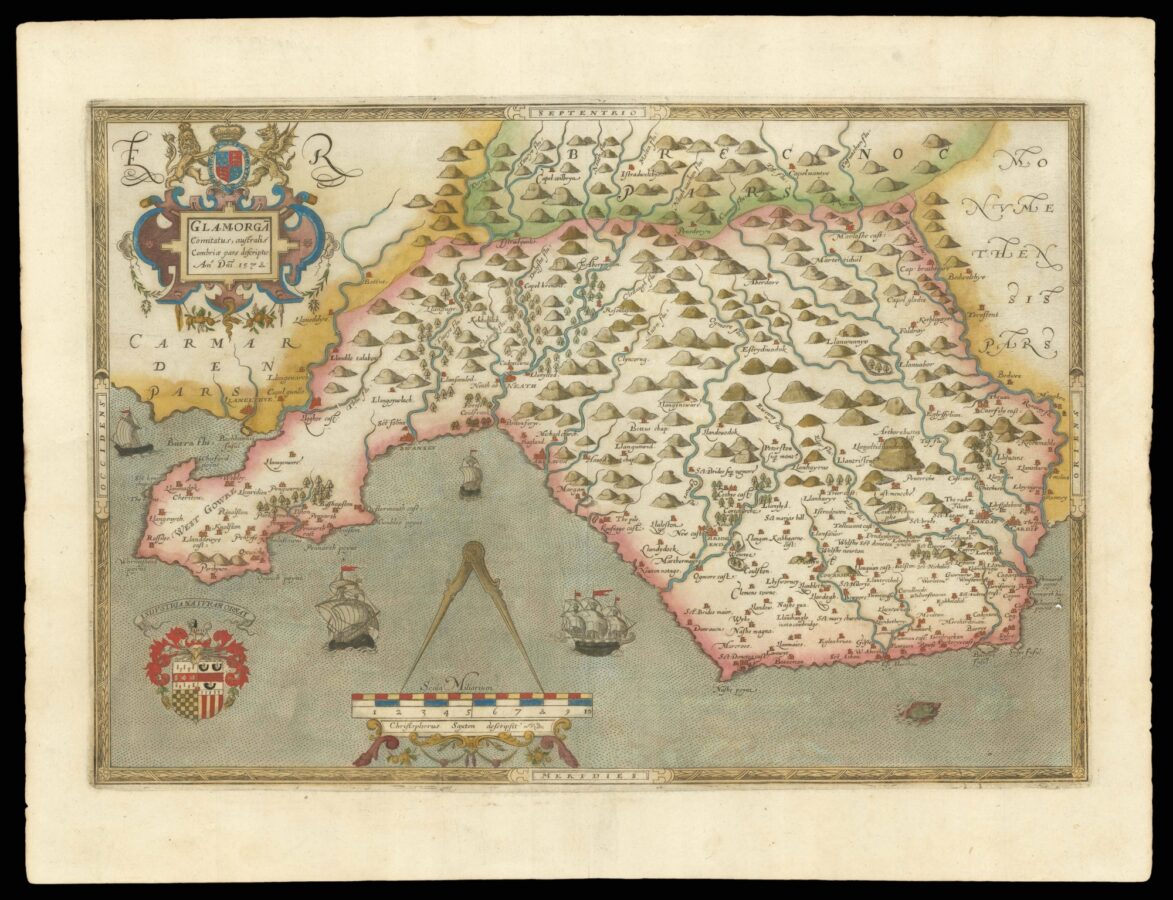 The first printed map of Glamorgan

In 1575 Queen Elizabeth’s Privy Council authorised Christopher Saxton to survey and map the entirety of England and Wales for the first national atlas. The cartographer subsequently produced a series of 34 county maps, including this, the first map of Glamorgan ever to be produced. The crown also issued him with a warrant to present to Welsh officials, decreeing that they were to provide him with Welsh-speaking guides. Without these aids, it may have been difficult for the Yorkshire-born cartographer to record locations such as Llanyltidiiandra and Eglyssylian. Although many of Glamorgan’s towns and villages are presented on this map, the settlements are depicted far more densely around the coastal areas, due to both the ease of surveying them and their importance in defensive strategy. With the population of Swansea growing as a result of its increasing coal exports, and the port of Cardiff recently expanded to accommodate the new quantities of goods being imported, it is no surprise that these regions receive more detailed attention on this map. Further inland, Saxton seems to have exaggerated the relief of the landscape; while the Southern Brecon Beacons do descend into the county, the hills illustrated here suggest a rather more mountainous terrain than exists in reality. The scarcity of settlements represented amid these hills also indicates that Saxton may not have been as diligent in his survey of Glamorgan as he was with the majority of the English counties, but nonetheless, more significant towns like Caerphilly and Aberdare are included.

The upper left corner of the map, the county name is written in Latin within an ornamental cartouche surmounted by the royal coat-of-arms, flanked by the English lion and Welsh dragon, and accompanied by the Queen’s initials. In the corner below the Seckford family crest is found with its later Latin motto, in honour of Saxton’s patron, Thomas Seckford. Beside this on the right, the map’s scale is raised on an elaborate plinth that also contains a banner identifying Saxton as the cartographer. Unlike on many of the maps in his ​‘Atlas of England and Wales’, it is not made clear who engraved the copper plate of Glamorgan, although it is likely to have been one of the craftsmen identified on one of the other maps. Additionally, like all the maps in his atlas, this map bears Saxton’s watermark, a bunch of grapes, to identify the work as original.