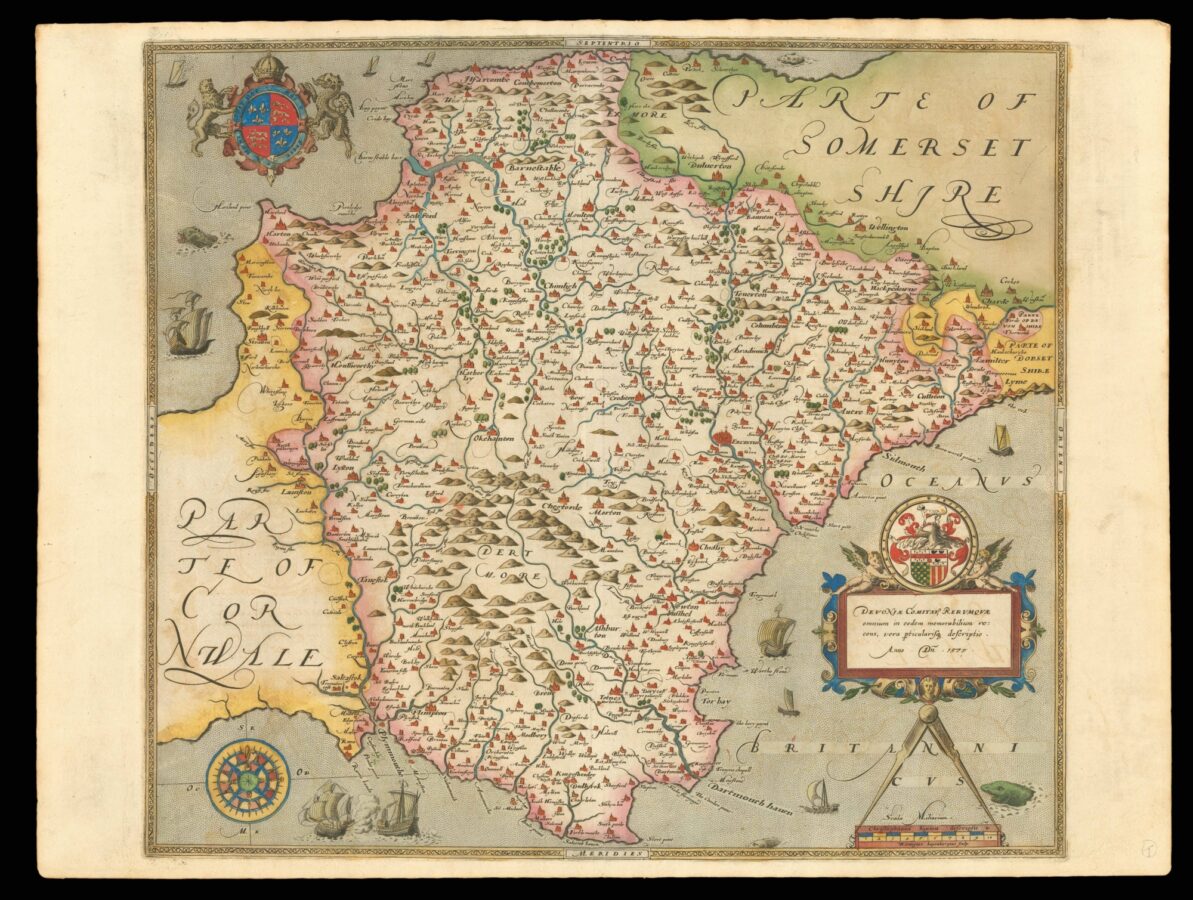 The first printed map of Devon

In 1575, Christopher Saxton was authorised by the Queen’s Privy Council to survey and map the counties of England and Wales, a task which he had completed by 1579, when the resulting maps were compiled and published in his seminal Atlas of England and Wales. The map of Devon proved to be of key importance as a tool for defensive military strategy. It was the first map of the county ever produced, and with the looming threat of a Spanish attack, was designed to be used by the Secretary of State, Lord Burghley, in planning the movements of the English forces. Plymouth was of great significance as a naval base, providing supplies to the English ships during their conflict with the Armada in 1588. In fact, Lord Burghley’s personal copy of the map of Devon is covered in hand-written annotations, noting the ​“Store of Ordonnaunce, powder and match, lead, &c., remayningin ye L. Lietenauntes, &c. Hands”. He also identified that the coastal regions were ​‘most daungerous and require greatest regard and assitaunce’.

Further inland, however, it is clear that Saxton had far more than naval strategy in mind when surveying the county. The famous tors and hills of Dartmoor are finely illustrated and coloured, with the 12th century Church atop Brentor included on the West side. Below this, Buckland Monastery is labelled, which would become ensconced in the estate of Sir Francis Drake following his victory over the Armada. The city of Exeter is also illustrated, presented as a mass of buildings along with its great Cathedral. On the North coast of Devon, Bideford is labelled in large script, attesting to its importance as a port after Elizabeth I established it for trade with the New World two years earlier. Along with these significant features, the map also presents the rivers, settlements, estates and woodlands, although the latter seem unusually sparser here than on Saxton’s other county maps.

Saxton’s map of Devon is embellished with the four features found on almost all of his county maps. In the upper left corner, the royal coat-of-arms is expressed in bold red and blue, flanked by the English lion and Welsh dragon. In the lower right corner the map’s scale is accompanied by two banners identifying Saxton as the cartographer and Remigius Hogenberg as the engraver. Hogenberg was also responsible for many of the other copper plates used to create the Atlas of England and Wales. Directly above the scale, an elaborate cartouche contains the county name in Latin, surmounted by the Seckford heraldic crest, complete with its earlier Latin motto. Thomas Seckford had been a central figure in Saxton’s royal commission, and is thought to have been largely responsible for funding the project. This map also contains the rare addition of a compass in the opposite corner, which points towards the huge significance of Devon as a coastal county and Plymouth as an important naval base. Additionally, like all the maps in Saxton’s ​‘Atlas of England and Wales’, this map bears his watermark, a bunch of grapes, to identify the work as original.