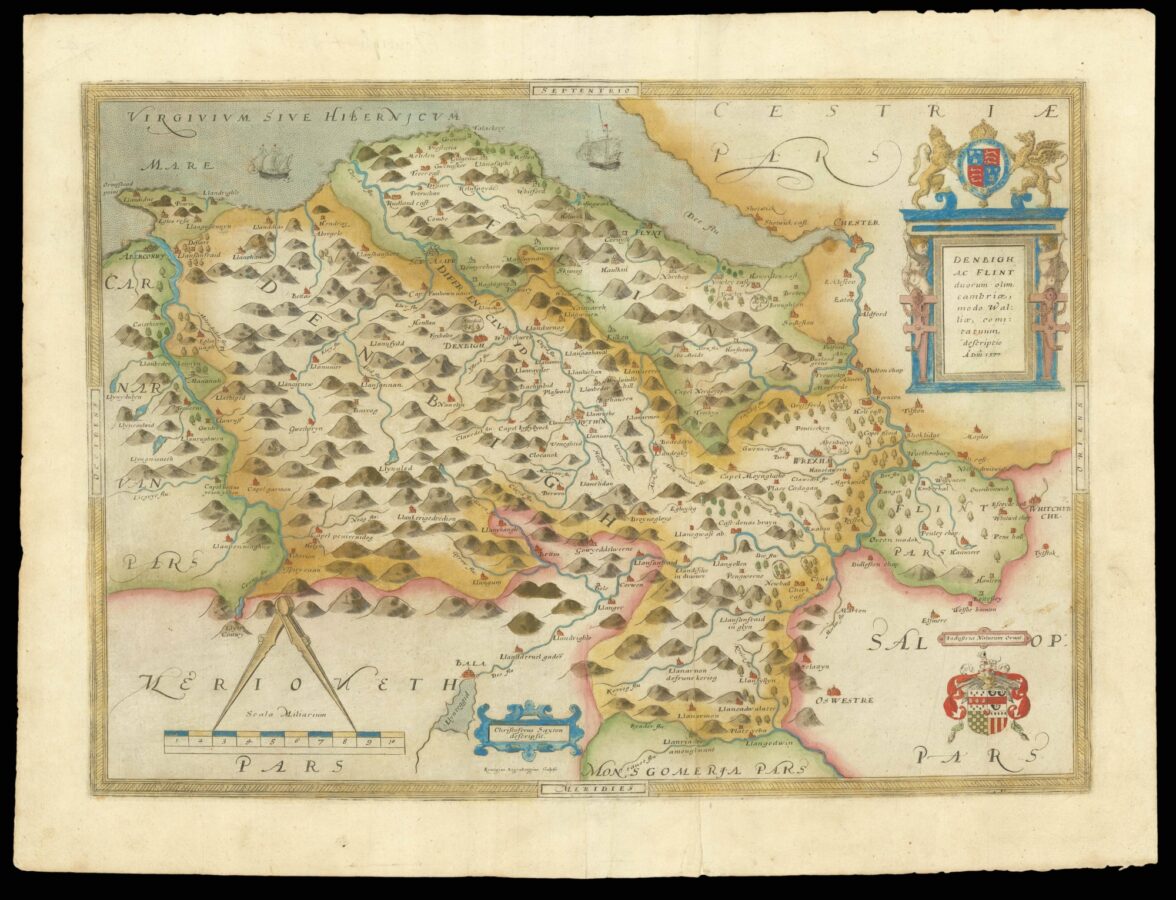 The first printed map of Denbighshire and Flintshire

In 1575, Christopher Saxton was authorised by the Queen’s Privy Council to survey and map the counties of England and Wales, a task which he had completed by 1579, when the resulting maps were compiled and published in his seminal Atlas of England and Wales. This is the last of the county maps included in the atlas, and is the first printed map ever produced to show either Denbighshire or Flintshire. The Laws in Wales Acts of the mid-sixteenth century consolidated the two counties, and they are represented here with the ongoing border dispute between the two counties resolved in Flintshire’s favour. Saxton surveyed the settlements and landscape of Wales in the late 1570s, noting the hills, rivers, towns and woodlands, which are here represented pictorially. His maps of the Welsh counties are, in general, less detailed than those in England, with fewer estates, bridges and villages shown, and yet important features, such as castles and cities are nonetheless presented prominently with their Welsh names labelled in larger script. Wrexham, for example, appears here as a dense collection of turreted buildings to distinguish the largest town in North Wales from the minor neighbouring settlements. Of particular significance to the Queen and her councillors who commissioned Saxton’s work were the many castles found in Wales, of which there were around 600. They are especially numerous in North Flintshire, where Hawarden, Ewloe and Flint castles are represented with small illustrations. In Denbighshire too, buildings such as Chirk and Holt Castles are recorded in the same way. While surveying the Welsh counties, another Elizabethan cartographer, John Norden, noted that many such castles were ​“nowe in great decay”. This may be because the crown often neglected its remote properties in favour of more significant or profitable estates, or due to the fact that the Act of Union in 1536 made many Welsh administrative centres redundant, since authority had shifted towards London.

In the upper right corner of the map there features a bold blue cartouche containing the Latin county names, surmounted by the royal coat-of-arms flanked by English lion and Welsh dragon. Directly below this in the lower corner, the Seckford family crest appears with its later Latin motto, in honour of Saxton’s patron, Thomas Seckford, whose coat-of-arms appears on all 35 of the county maps in his Atlas of England and Wales. At the centre of the lower border, a blue cartouche identifies Saxton as the cartographer, whereas the name of the engraver is omitted, even though there is an empty banner below the map’s scale, where the name would typically appear. Additionally, like all the maps in Saxton’s ​‘Atlas of England and Wales’, this map bears his watermark, a bunch of grapes, to identify the work as original.