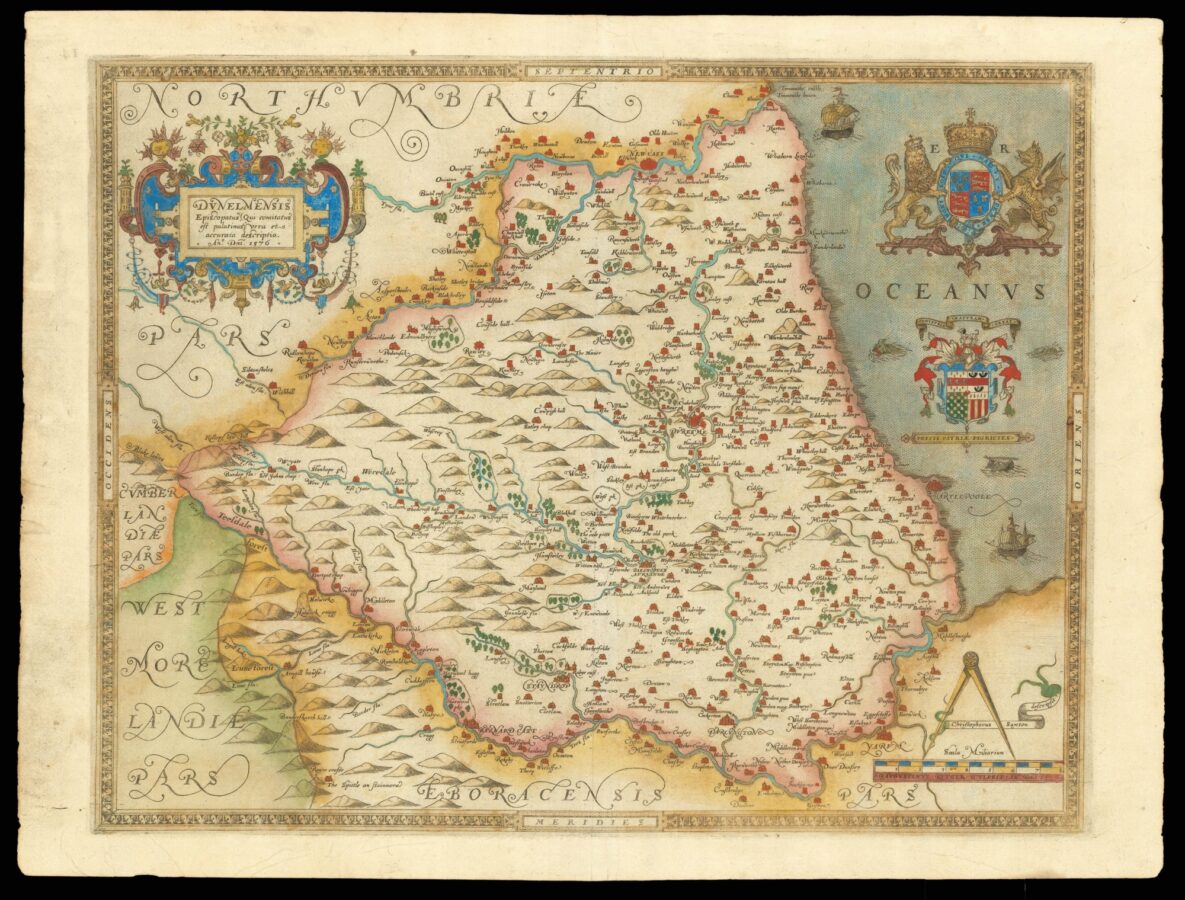 This is the first printed map of County Durham, on which the region is labelled with the Latin name ​“Dunelmiensis Episcopatus”, or the Bishopric of Durham. It is one of the early maps created by Christopher Saxton under commissioned by the Privy Council in in late 1570s. With royal patronage, the cartographer surveyed the counties of England and Wales, the results of which were compiled in the first national atlas, his ​‘Atlas of England and Wales’. The maps contained within the atlas were used both as tools for strategic defensive planning, which explains the attention devoted to coastal areas, and later as a decorative piece, as hinted at by the galleons, sea-monsters and elaborate embelms that adorn this map around the surveyed region. Saxton gives particular prominence to the hills which dominate the Western half of the county, and many enclosed parklands also feature, identifying the land owned by the local gentry. The two major settlements of Durham and Darlington are shown as dense collections of buildings, while smaller towns are represented by single Churches or houses. They are all labelled with their English name, whereas the surrounding counties are denoted by their Latin titles.

The Latin county name is boldly presented in an intricate cartouche in the upper left corner, while on the opposite side, the royal coat-of-arms is flanked by the English lion and Welsh dragon. Directly below this the Seckford family crest is accompanied by both its earlier and later Latin mottoes, in tribute to Saxton’s patron, the courtier Thomas Seckford. In the lower right corner, the map’s scale is found, along with two banners identifying Saxton as the cartographer and Augustine Ryther as the engraver. Ryther was a well-known craftsman, originally from Leeds, who was responsible for several other maps in Saxton’s atlas, such as Gloucestershire and Yorkshire, and who was also known for producing mathematical instruments. Additionally, like all the maps in Saxton’s ​‘Atlas of England and Wales’, this map bears his watermark, a bunch of grapes, to identify the work as original.