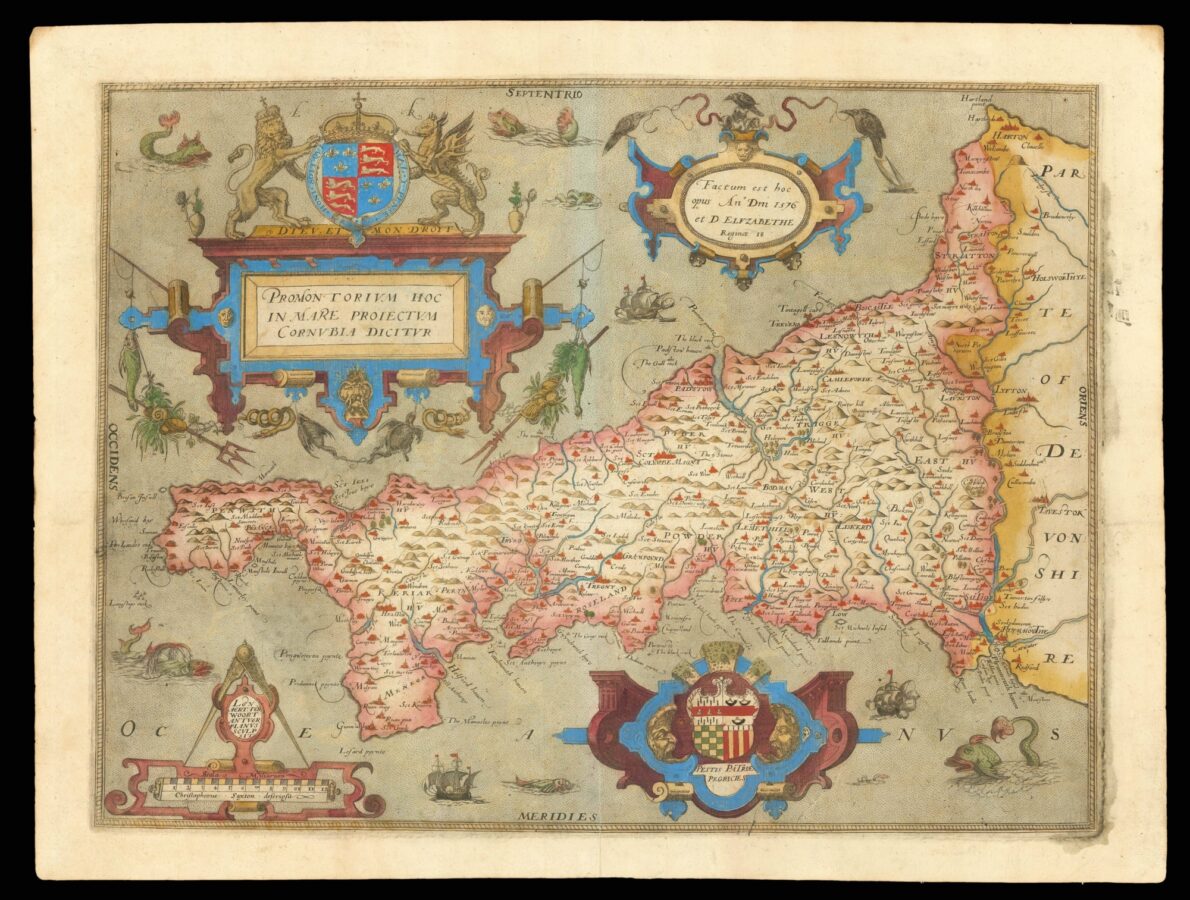 The first printed map of Cornwall

In 1575, Christopher Saxton was authorised by the Queen’s Privy Council to survey and map the counties of England and Wales, a task which he had completed by 1579, when the resulting maps were compiled and published in his seminal ​‘Atlas of England and Wales’. It includes this map of Cornwall, the first map of the county ever to be produced. It was designed with several aims in mind: on the one hand, the intricately illustrated sea-creatures and Elizabethan galleons featured in the surrounding ocean attest to the ornamental purpose of this map, while on the other, the detailed survey of the county’s landscape and settlements point towards its use as an administrative and defensive tool. The country’s coastal regions receive far more attention in Saxton’s national survey, and for this reason the map of Cornwall provides a detailed record of the inlets, harbours, rivers and towns that bordered the sea. Although some of these are far from accurate geographically, such as Land’s End, which is presented much further North than it is in reality, the map was nevertheless useful to the Secretary of State, Lord Burghley, who annotated his personal copy with additions that might prove useful in case of an attack by sea. Further inland, hills, towns, villages and unusually sparse woodlands are represented pictorially and labelled with their name in English. The fishing town of Padstow is shown with surprising prominence, comparable to that of Penzance and Newquay, perhaps because of the influential Prideaux family who lived there.

A majestic cartouche, surmounted by the royal coat-of-arms, dominates the ocean to the North of the Cornish promontory, containing the county name in Latin. To the right of this, the dedication and date of the map is enclosed within a similar, but smaller, cartouche. Along the lower border, the map’s scale also identifies Saxton as the cartographer and Lenaert Terwoort as the engraver responsible for creating the copper plates from which the map was printed. On the opposite side, the heraldic crest of the Seckford family is cased within another elaborate cartouche, in tribute to Saxton’s patron, Thomas Seckford. Additionally, like all the maps in Saxton’s ​‘Atlas of England and Wales’, this map bears his watermark, a bunch of grapes, to identify the work as original.