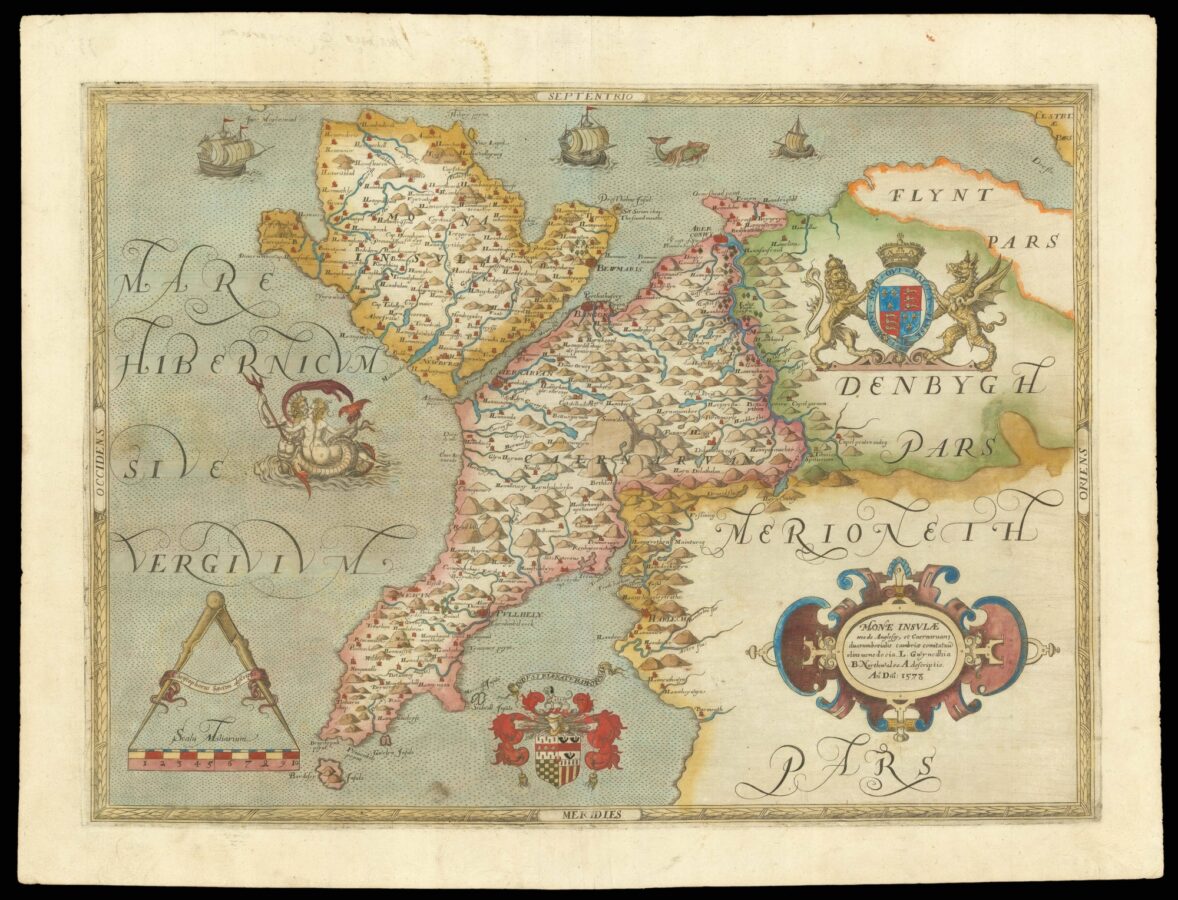 The first printed map of Anglesey and Caernarfon

In 1575, Christopher Saxton was authorised by the Queen’s Privy Council to survey and map the counties of England and Wales, a task which he had completed by 1579, when the resulting maps were compiled and published in his seminal ​‘Atlas of England and Wales’. This map of Anglesey and Caernarfon represents the first time that either county had been comprehensively surveyed and mapped. The Tudor line traced its origins back to Owen Tudor, a nobleman from the town of Penmynydd in Anglesey, and it is perhaps for this reason that Saxton devotes such attention to the island as part of his Atlas of England and Wales, a project which he undertook with a royal warrant from Queen Elizabeth I. Anglesey’s rivers, hills, towns and villages are depicted pictorially, with the important settlements of Beaumaris, with its famous castle, and the county town of Newborough, given particular prominence. Saxton has also included the tiny island of Priestholm (now known as Puffin Island) to the East of Angeley, along with a small depiction of its monastery.

On the mainland, Saxton expresses the details of Caenarfon’s terrain, dominated by hills and mountains, notably Snowdon in the centre of the map. Although the ascension of the Tudor line did bring some benefits to Wales, such as less strict restrictions on access to towns such as Caenarfon, in which Welsh natives were only permitted to live in 1507, the official unificiation of the two countries in 1536 meant that many administrative centres in the principality became redundant. One example is Caernarfon castle, represented by a tiny drawing on the North West coast, which became neglected during the sixteenth century. The coastal regions of the mainland receive particular attention because of the map’s purpose as a tool for defensive and administrative planning, in case of attacks by sea. It is for this reason that Saxton takes care to record the small islands and inlets that feature around the coast.

This map is also ornamented with several decorative features. Along with the Elizabethan galleons and sea-creatures illustrated in the surrounding ocean, the engraver has included a striking image of the god Neptune embracing a woman upon the waves. Below this in the lower corner, a banner woven around the map’s scale identifies Saxton as the cartographer. Although the name of the engraver is omitted, the copper plate is likely to have been created by one of the craftsmen named on Saxton’s other maps, such as Remigius Hogenbern or Augustine Ryther. At the centre of the lower border, the Seckford family crest, accompanied by its later Latin motto, pays tribute to Saxton’s patron, Thomas Seckford, who played a key role in arranging his commission. In the lower right corner, an elaborate cartouche contains the Latin names of the two regions, while above this the royal coat-of-arms is flamed by the English lion and Welsh dragon. Additionally, like all the maps in Saxton’s ​‘Atlas of England and Wales’, this map bears his watermark, a bunch of grapes, to identify the work as original.