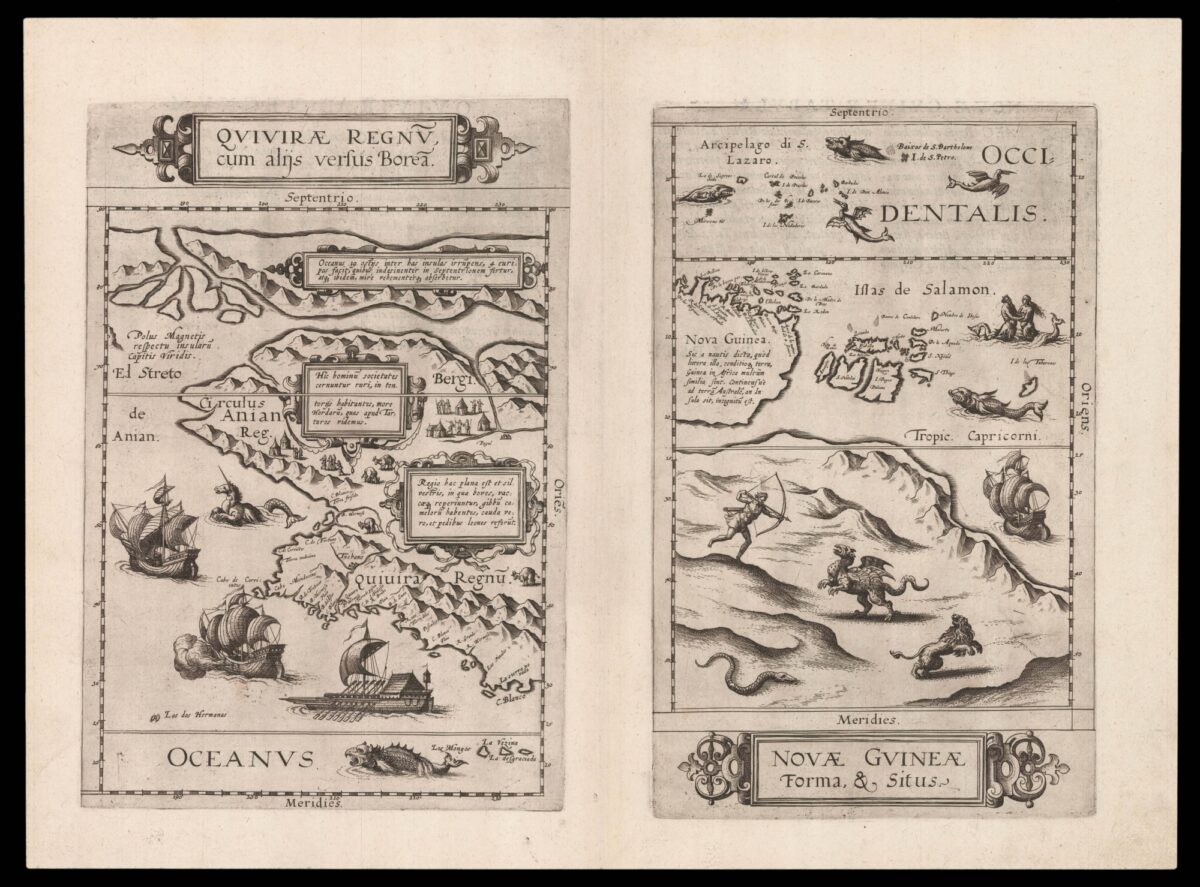 A map sheet containing two seminal maps of the Pacific: the earliest map focused on Alaska, the Northwest and upper California, and ​“the first printed map of Australia” (Tooley).

In the map of North America the west coast is reasonably well delineated, and de Jode has chosen to include the mythical Strait of Anian separating America from Asia. The existence of a body of water between the two continents had been suggested but not proved when the map was made. Despite the channel between the continents, the figures populating America are outside tents and domed buildings which are distinctly Asian in appearance. It was widely believed that America was first settled by migrants from Asia, as confirmed by an inscription on the map comparing Native Americans to Tartars. De Jode obscures the lack of internal geographical knowledge of the continent with two large strategically placed cartouches.

At the top of the map are four imaginary islands. Mercator believed that four great rivers ran into a central whirlpool between these four islands. The magnetic north pole is marked by the edge of a black rock at the left edge of the map, which supposedly stood between the islands.

The map of Australasia shows part of New Guinea, and a speculative Australian coastline. New Guinea was named by the Spanish explorer Íñigo Ortíz de Retes in 1545, who thought that the landscape and people were similar to those of the Guinea region of Africa: the Latin text on New Guinea explains this. Australia is populated by a hunter chasing real and mythical beasts.

It was still a largely unexplored part of the world, with only the reports of a few Spanish and Portuguese voyages to draw on. The text on New Guinea warns that observers are still not sure whether it is an island or continent, but calls Australia ​“a fifth continent”, indicating an awareness of its size.

The two maps are rare, with only one known state. They appeared only in the second and final edition of the ​‘Speculum’ in 1593.

The ​‘Speculum’ was first published in 1578 by Gerard de Jode (1509–1591) with text by Daniel Cellarius. It was designed to compete with Abraham Ortelius’ atlas, ​‘Theatrum Orbis Terrarum’, which had been published eight years earlier. Ortelius used his influence to disrupt de Jode’s application for a royal privilege. By the time this was finally granted, seven years after the publication of the ​‘Theatrum’, Ortelius’ work had become so popular that de Jode’s atlas did not sell well, despite the accuracy and clarity of his maps.