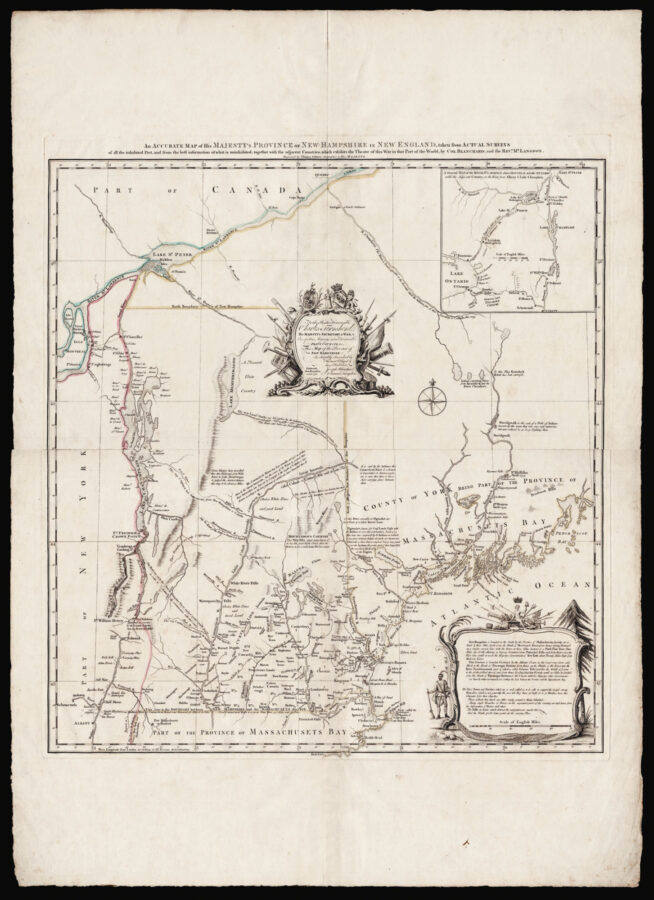 By BLANCHARD, Joseph and LANGDON, Samuel, 1761

An Accurate Map of His Majesty’s Province of New-Hampshire in New England taken from actual surveys of all the inhabited Part, and from the best information of what is uninhabited, together with the adjacent Countries, which exhibits the Theatre of this War in that Part of the World, by Col. Blanchard, and the Revd. Mr. Langdon.

An attractive, and unusually wide-margined example of the first printed map devoted to New Hampshire, produced at the height of the French and Indian War (1754–1763), showing the disputed French and English boundaries in the region, and the aggressive land grant policies and real estate ambitions of colonial governor Benning Wentworth.

The map includes present-day New Hampshire and Vermont, extends west to the Hudson River and east to Lake George, shows the southern half of the Province of Maine, as far east as Penobscot Bay, portions of northern Massachusetts and eastern New York, some of Quebec along the St. Lawrence River, and an inset map at the upper right focuses on the region of eastern Lake Ontario, the St. Lawrence, and Lake Champlain.

The map shows clearly the distinction between areas that have been surveyed, and those that are still largely uncharted. The southern half of the map is very detailed: townships and land grants are delineated, mountains, small lakes, rivers and streams are depicted, with forts, bridges, waterfalls and portages identified. By contrast, the region west of the Connecticut River remains sparsely populated, and the mountains are unmarked. The northern half of the Province is essentially an uncharted wilderness, with few topographical details, many of which are inaccurate. Lake Mephremagog appears just east of Lake Champlain, other waterways are speculative. Many are accompanied by disclaimers and notes on sources: ​“These branches are only Conjectural” and ​“Only the mouth of this River is known to ye English”; the River Chaudière ​“is drawn agreeable to the Accounts which the Indians give of their Travelling to Canada this way”; a waterway leading into Mephremagog describes it as the ​“way Lieutt. Starks was led Captive by the Indians from Connecticut River to Canada 1752. This River and Lakes are Drawn agreeable to his Accounts”; the end of the Connecticut River, mistakenly shown as ending in Maine, ​“is said by the Indians that Connecticut River & a branch of Sagadahok or Amorscoggin are so near that there is but a short carrying place between them”; at Pigwacket in Maine ​“Capt.Lovels Fight with the Indians in 1725, who commanded a scout of 34 Men…surprised by 80 Indians in Ambush…”; the White Mountains, as the ​“White Hills,” are said to ​“appear many Leagues at Sea like bright Clouds above the Horizon, & are a noted Land Mark to Seaman”.

The map is decorated with two large cartouches, a central one with the dedication, and one to the lower right which describes New Hampshire’s boundaries, and a key to the symbols used on the map.

The map’s cartographers, Colonel Joseph Blanchard (1704–1758) and Samuel Langdon (1723–1797) were both very familiar with the area. The former was a surveyor and commander of the New Hampshire forces during the Siege of Louisbourg; and the latter was chaplain of the New Hampshire regiment during the Louisbourg expedition, pastor of the North Church in Portsmouth, and later President of Harvard College.

Library of Congress holds a manuscript map apparently based on Blanchard’s surveys of 1756, and other surveys and sources, signed by Langdon and dated 1756, which is very similar to this printed version.
Nevertheless, there are some interesting and revealing differences: the manuscript is explicitly dedicated to Governor Benning Wentworth, not Charles Townshend, ​‘Secretary at War’ as here, and its title contains considerable information regarding its emphasis on the regions threatened by French encroachment, as well as references to the sources of information consulted in drafting the map.

It is, therefore, probable that Blanchard and Langdon compiled this original map at the behest of Wentworth, whose expansionist policies it reflects. Wentworth had been granting lands west of the Connecticut (and grabbing much for himself and his family at the same time) since 1749. This was in direct conflict with the Province of New York, which considered the Connecticut River its eastern boundary. The contest with the French constituted an even greater threat to Wentworth’s claims. He would have had abundant reason to order such a map, and have it dedicated to the Secretary of War.