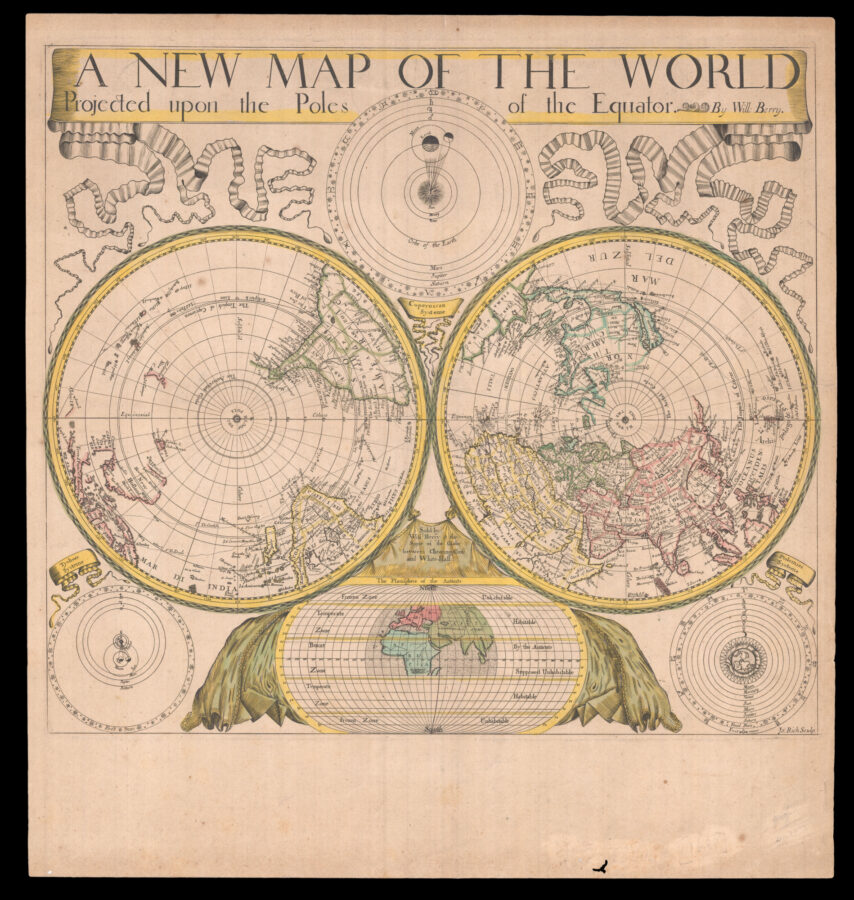 A New Map of the World Projected upon the Poles of the Equator By Will. Berry.

The first world map on polar projection to be published by an Englishman.

Polar projection is a type of azimuthal projection based on a plane perpendicular to the Earth’s axis through the poles. On polar-centered azimuthal projections, longitude is represented by radial straight lines, and latitude by concentric circles, or parallels. One of the earliest examples of a polar map of this kind is Mercator’s 1569 world map, on which the Arctic is shown in an inset map on a polar projection, rather than included as part of the main image on the eponymous cartographer’s projection.

Other early double hemisphere world maps on north and south polar projections include Gerard De Jode’s Hemispheriu ab Aequinoctiali Linea, 1593; Isaac Habrecht’s map of 1628; Janssonius’ Typus Orbis Terrarum from the same year; Jean Boisseau’s Nouvelle Description de toute la terre universelle of 1640; and Novus Planiglobe Terrestris Per Utrumque Polum Conspectus, engraved by Joan Blaeu before 1672, the only extant example of which bears the later imprint of Gerard Valck, published around 1695. The present map by Berry is an example of the first map on polar projection to be published by an Englishman.

Published around 1680, Berry’s map shows both the north and south hemispheres on a polar projection at a scale of approximately 1:100,000,000, with both extending to the equator, which is scaled. The coast of Australia is incomplete and California is shown as an island. Other cartographic myths include the massive single Great Lake and the Straits of Anian. The sizes of the Philippines and Japan are exaggerated, and the southern tip of South America has been truncated due to the projection.

At first glance the work would appear to be a copy of Blaeu/​Valck Novus Planiglobe Terrestris Per Utrumque Polum Conspectus; and although Berry’s English title is an almost direct translation of Blaeu’s work, it is no merely slavish copy. Berry has reversed the hemispheres, and significant cartographic differences are evident, especially in the depiction of South America.

Surrounding the hemispheres are cosmological diagrams showing the Ptolemaic, Copernican and Tychonic solar systems, as well as a smaller map of the ancient world. This shows only Europe, Asia and Africa, and is divided into layers of ​“temperate zone”, ​“frozen zone”, ​“unhabitable” and ​“habitable by the Antients” regions. Ribbons ornament the upper left- and right-hand corners, streaming from the ends of the simple title banner along the upper edge. The map was engraved by John Rich, who also executed his road map of Great Britain the year before.

In his Printed Maps in the Atlases of Great Britain and Ireland, 1579–1870, Thomas Chubb describes Berry as a bookseller, geographer, and engraver, who was active between about 1670 and 1703.

Berry was the son of a Warwickshire baker, probably apprenticed alongside his future partner Robert Morden (c1650-1703) to Joseph Moxon (1627–1691), an engraver, mapmaker, globe-maker and instrument-maker. His most enduring partnership was later with Morden, and together they sold topographical works, prints, maps, charts and globes. Among their shared works were A New Map of the English Plantations in America (1673), William Leybourn’s An introduction to astronomy and geography: being a plain and easie treatise of the globes (1675), and Playing cards depicting the Counties (1676).

In 1677 they petitioned the Attorney General for ​“a licence to do all general and particular maps of the several parts of the world according to an alphabetical manner and method first projected by them against any other undertakers”. Although there are individual maps and globes prepared by the pair, the larger project never came to fruition, although Berry is best remembered, as the ​“English Sanson”, for the set of maps of the world that he corrected and amended after Nicolas Sanson, which were issued separately between 1680 and 1689.

Rare we are only able to trace one institutional example, held at The Library of Congress, and a smaller facsimile at the British Library.

Thomas Chubb, in his Printed Maps in the Atlases of Great Britain and Ireland, 1579–1870, describes Berry as a bookseller, geographer, and engraver, who was active between about 1670 and 1703. His most enduring partnership was with mapmaker Robert Morden (c1650-1703), and together they sold topographical works, prints, maps, charts and globes. 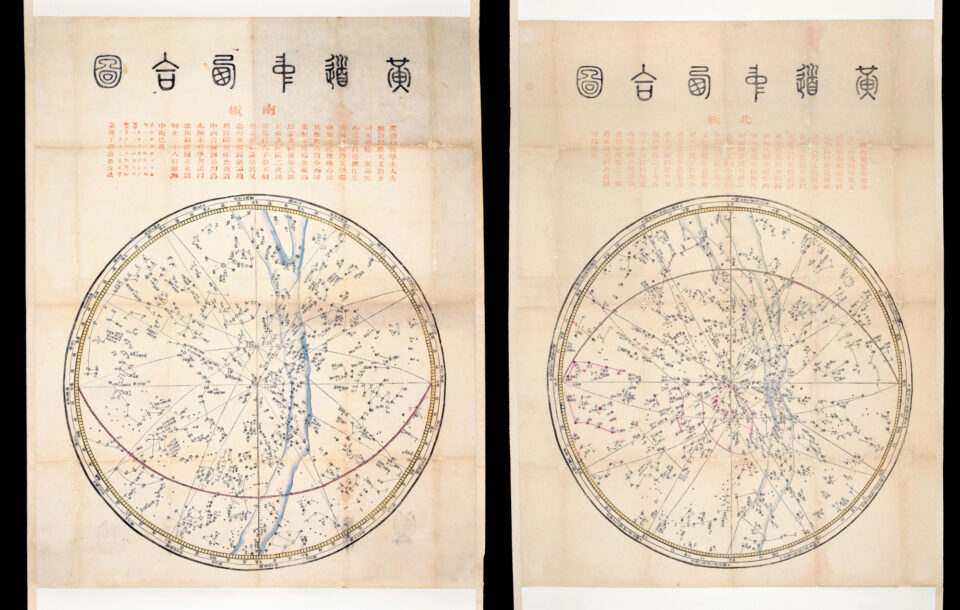