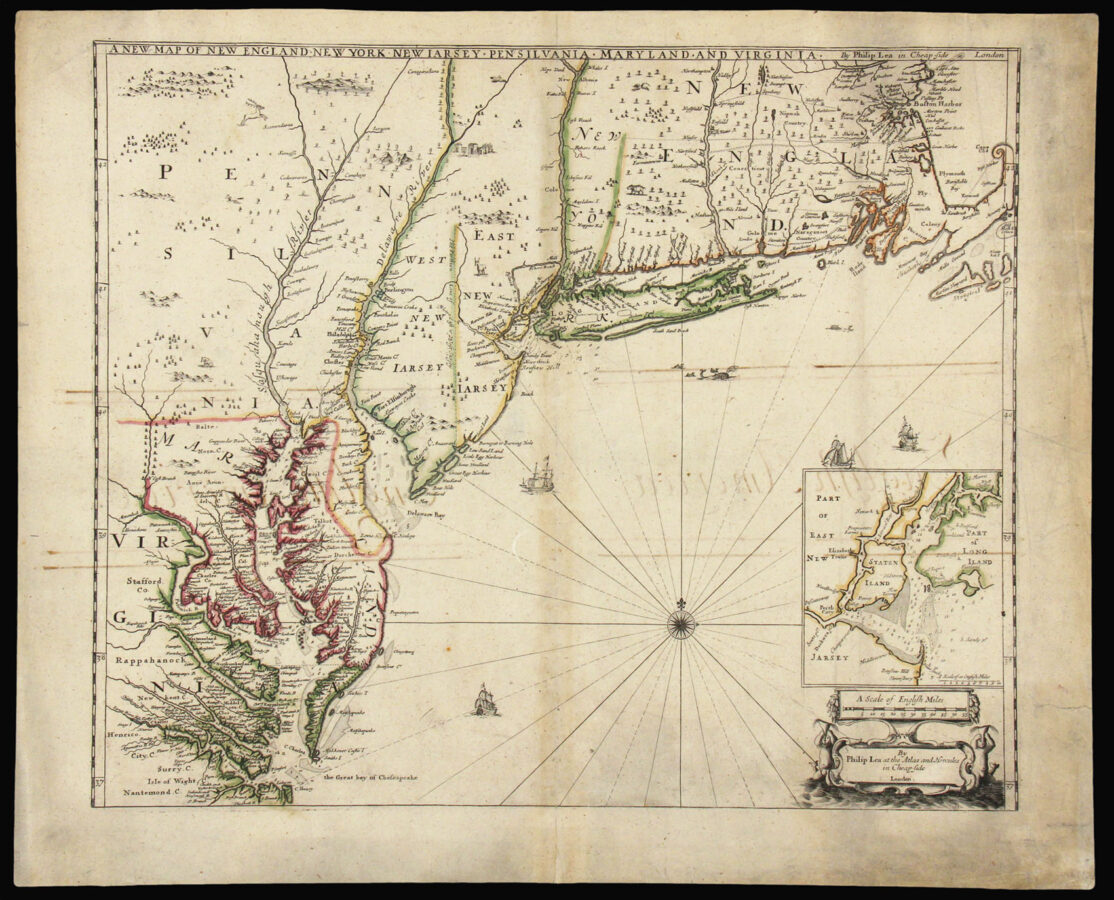 “In May 1685 John Thornton, Robert Morden and Philip Lea advertised for sale a multi-sheet map entitled ​‘A New Map of the English Empire in the Continent of America’. Although earlier multi-sheet maps of the Americas existed, namely the Augustine Herrman 1673[74], none survive that were of the entire English colonies in North America” (Burden). The only known example of their advertised map is held in the Bibliothéque Nationale, Paris.

The multi-sheet map was designed in such a manner that allowed for some of the sheets to be issued separately, as in the present example: ​“This can be shown by the fact that the title runs in a narrow border along the top, so that when made up as a wall map it may be pasted or cut out. A main area of the debate is whether the map appears in an earlier state than that surviving today.

​“It has been argued that the inset plan of New York harbor, and the scale and imprint cartouche below it, are later insertions, and that they do not appear on the state intended for the wall map. The author believes this is not the case as the scale is the only one on the finished wall map. The plan was inserted at a later stage of production merely because the information became available, and quite possibly because the Duke of York, the harbour’s proprietor, was the newly crowned King. It was clearly a late insertion as a sand bar on the main map has been altered to match that in the inset.

​“The inset is the first printed chart of New York harbour, and superseded the efforts of John Seller in his map of New Jersey, c1675. Taliaferro identified the source as being a manuscript by Philip Wells. East New Jersey had been sold to William Penn and eleven other Quakers in February 1683. They requested that Wells produce a map of New York harbour to help them in their dispute with the colony of New York over stated Island. The manuscript bears the inscription ​‘Being the Proprietors 1682/3 meaning it must have been produced shortly after acquisition. Further study of the text places the earliest possible date as mid-May 1683. A plain version entitled ​“A San Draught of New York Harbour” by Philip Wells exists in the Penn Papers now in the Ayer Collection, Newberry Library. Wells laid out the city of Perth Amboy for the Proprietors by May 1683, and while serving as the Surveyor General for New York worked on the boundary dispute between that colony and Connecticut in 1684. Sometime around 1685 he became the Surveyor General for Governor Edmund Andros and composed a manuscript map of Boston harbour. Wells was described in the Minutes as ​‘one that’s both capable and honest in that imploy [surveying], and lives on Stated Island near adjacent to us’. Indeed, his dwelling is noted on the printed map at the northern tip of Staten Island. Thornton in particular had worked with Penn before and it is most probably through the auspices of Penn that the work of Wells reached him.

​“The cartography of the main map is derived from two chief sources. First the Chesapeake Bay region is derived from Thornton’s earlier map co-published with Robert Greene, c1678, it being drawn from the Augustine Herrman, 1673[74]. The major area of alteration as expected is that of the new colony of Pennsylvania. Thornton was involved with the new colony quite closely, producing the key promotional map in 1681. It is this document that Thornton incorporates here, although it appears not without some difficulty. There are signs of erasures from the middle of the Delaware peninsula northwards into Pennsylvania. The Schuylkill River is reduced in length but Philadelphia is present as is the recently renamed Borlington. New England too appears to be derived from the Thornton and Greene with a few minor alterations. The south coast of Long Island is much improved, displaying the Great South Bay. Similarly Long Island Sound is more open to the east. The entire region around Boston has also been improved; indeed, there are signs of later alteration here also. A border defining the Plymouth Colony is displayed which derives from the 1664 compromise reached with Massachusetts. This ran the boundary westwards from the coastal town of Scituate. Two main roads are delineated leading from the Boston area and what appears to be a third more minor one to Springfield.

​“Thornton, Morden and Lea collaborated in producing this map. Thornton and Morden were already well established, particularly in the field of American mapping. Lea had been apprenticed to Robert Morden from April 1675 and freed by 1683. Some of Lea’s early works were in partnership with Morden and his partner of the day, William Berry. This expressed their respect for his abilities. Lea continued to work with Morden for much of his career. Morden was often in financial difficulties whilst Lea appeared to be the consummate businessman. Indeed, it is probably for this reason that Morden sold his interest in this map to Lea. Thornton also sold his for reasons unknown, but these may have been tied to his preparations for the English Pilot Fourth Book which was to be published with William Fischer in 1689. In 1687 Lea moved premises to Cheapside as his business was growing rapidly. There are four known states of the map” (Burden). 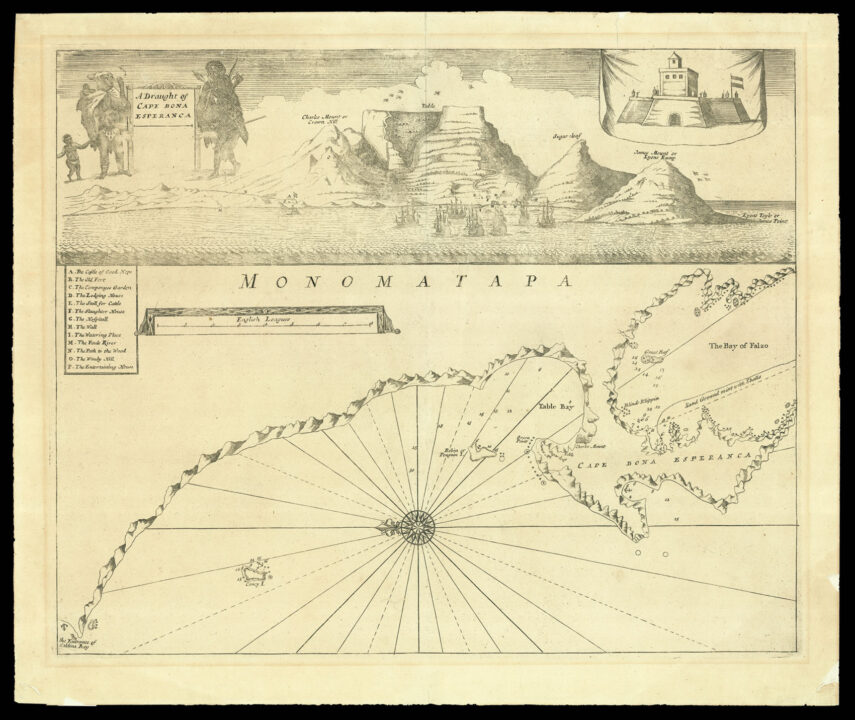