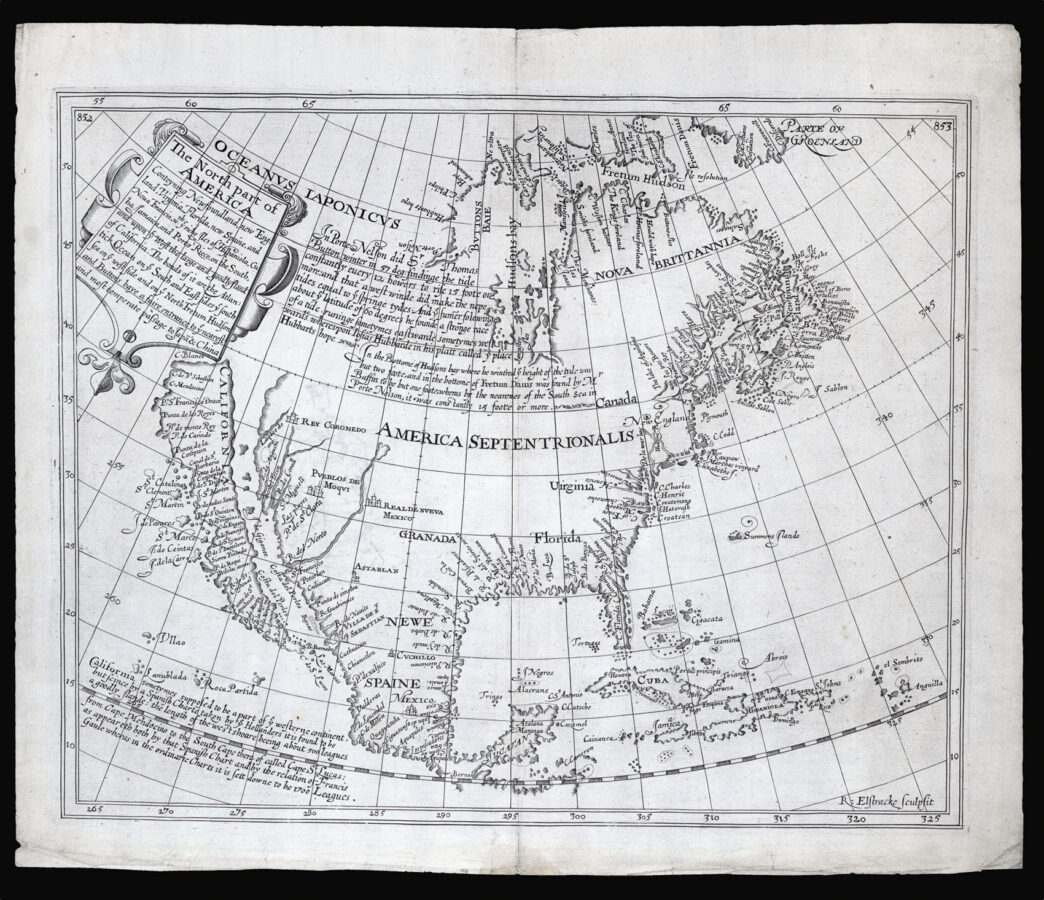 The first map to show California as an island

The North Part of America. conteyning Newfoundland, New England, Virginia, Florida, New Spaine and Nova Francia, with ye rich Iles of Hispaniola, Cuba, Jamaica and Porto Rieco on the south and upon ye west the large and goodly island of California. The bonds of it are the Atlantick Ocean on ye South and East sides ye south sea on ye west side and on ye North Fretum Hudson and Buttons baye a faire entrance to ye nearest and most temperate passage to Japan & China.

This map was published in Samuel Purchas’s ​‘Purchas his Pilgrimes’, 1625, in Book IV to illustrate ​“English Northerne Navigations, and Discoveries, Relations of Greeneland, Groenland, The North-West Passage, and other Arctike Regions, with later Russian Occurrents”, and is best known for being the progenitor of the myth of California as an island. Since it may have been published as early as 1622, it is also proposed as the first map to name ​“Hudsons bay”, ​“Fretum Hudson”, ​“Hudsons R”, ​“Cape Cod”, and ​“De la war bay” (Burden).

​‘Purchas his Pilgrimes’ was a great geographical collection and a continuation and enlargement of Hakluyt’s ​‘The Principal Navigations’. When Hakluyt died he left a large collection of voyages in manuscript which came into the hands of Purchas, who added to them many more voyages and travels. As an editor and compiler, Purchas sought to interest the general public of his day in the dramatic geographical discoveries that had taken place with remarkable rapidity over the previous 140 years. During a time when travel literature had the patriotic purpose of inspiring Englishmen to engage in overseas expansion and enterprise, his collections were read with enthusiasm.

Henry Briggs (1561–1630) was a noted scholar and mathematician of the time. His map, engraved by Reynold Elstracke, is desirable today as the first map to show California as an island, a geographic misconception that endured for centuries and has inspired numerous books and generations of map collectors. The map contains three legends including ​“California sometymes supposed to be a part of ye westerne continent, but since by a Spanish Charte taken by ye Hollanders it is found to be a goodly Ilande”. The map notes the expedition to the west coast of Sebastian Vizcaino in 1602–1603, possibly showing P.S. Diego and S. Clement for the first time. It was Friar Antonio de la Ascension’ account of that expedition which is believed to be the source of the theory of California as an Island.

The map was also one of the first to propagate rumors of the existence of a Northwest Passage, based on the accounts of recent explorations. The map’s text promises that Hudson’s Strait and Button’s Bay provide a ​“fair entrance” to the South Sea, in other words, they are the gateway of the passage. This map, widely followed by later mapmakers, truly deserves the attention it has received. The concept it spread of California being an island took hold among even the most sophisticated mapmakers. Although it was refuted by Father Kino in 1698 when he traveled to the west coast of California, it still took a royal decree from Ferdinand VII of Spain in 1747 to finally persuade cartographers to alter their delineations.