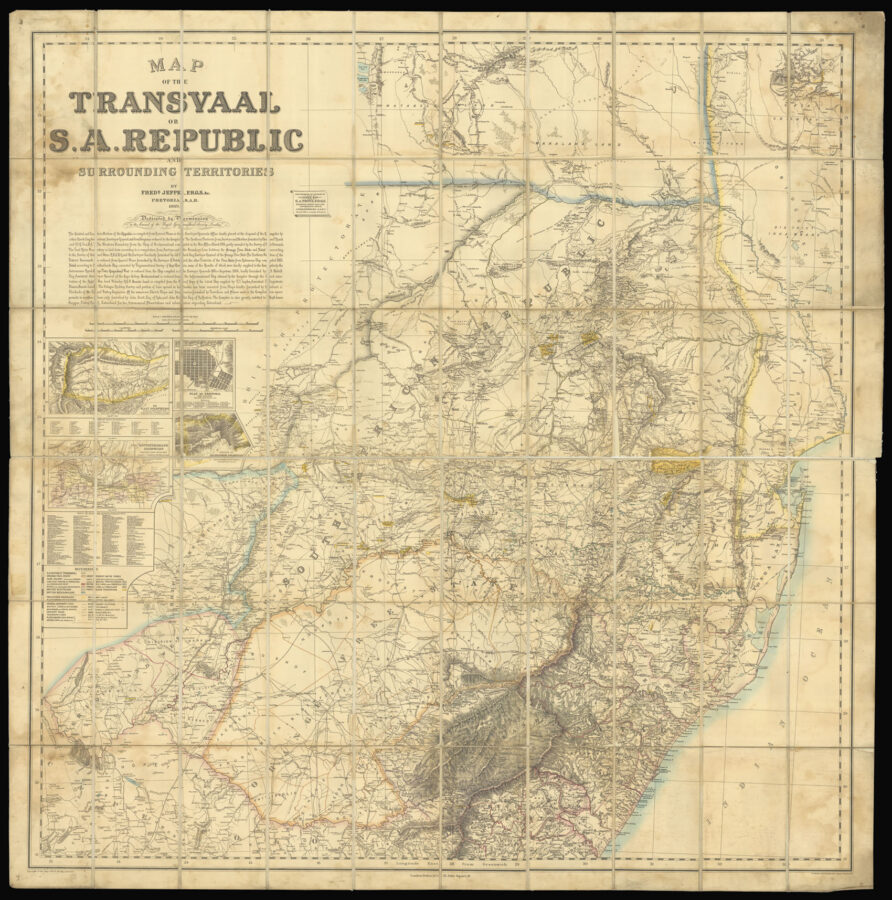 The first map to name Johannesburg

Map of the Transvaal or S. A. Republic and Surrounding Territories By Fredk. Jeppe F.G.R.S.&c. Dedicated by Permission to the Council of the Royal Geographical Society.

This map of the South African Republic is the first to ever name the city of Johannesburg, founded in 1886, after the discovery of the Witwatersrand gold reef triggered the largest gold rush in history. It appears in the centre of this map, highlighted in yellow to identify it as an area rich in gold reserves. In fact, a collection of inset maps show the major mineral-rich regions in even greater detail, including the Witwatersrand Goldfields, and beneath them a list of the registered mining leases is found. At this point in time, cartographer was increasingly significant not only from a navigational and geographical perspective, but also for political purposes. Less than a decade after the First Boer War, national and cultural identities were still being determined, and mapping was central to the negotiations over colonial conquest, as it provided a visible delineation of the South African Republic. The importance of cartography is evidenced by the reference box on the left border of this map, which presents a key identifying certain areas of land as British, Portuguese or independent possessions.

Born in Rostock, Germany, Friedrich Jeppe emigrated to South Africa in 1861, where he worked first as a merchant, but within five years was appointed postmaster at Potchefstroom. Two years later he was promoted to Postmaster-General of the South African Republic, and in this role he greatly expanded the mail-cart system, connecting various regions across the Transvaal. Following this post, he was made Treasurer-General, then elected to join the government’s Executive Council, made postmaster of Pretoria, and worked as a translator and interpreter at the Supreme Court. Jeppe was also involved in compiling government statistics and sat on the committee of the Pretoria Public Library. It comes as no surprise, therefore, that he would turn his attention to cartography, representing a wide range of data, from the topographical to the industrial, on his Map of the Transvaal.

It was the most thorough map of the South African Republic to date, including the entirety of the Orange Free State, Lesotho, Griqualand West and Natal. Although the relief of the land is not expressed, as Jeppe had no access to triangulation methods, it is overall an astoundingly accurate representation of the area, with the smaller details garnered from a variety of local sources such as farm diagrams. Jeppe also relied on previous surveys undertaken by other cartographers, used traveller routes to map navigable roads and measured cities and towns with a trochiameter. The map was published along with a commentary, in which Jeppe noted his observations about the country in greater detail, being the first person to suggest, for example, that the Pretoria Salt Pan was volcanic in origin, a view which became prominent over the following century. Although this is now thought to be incorrect, work such as this led to Jeppe’s election as a fellow of the Geographical Society of London. Although the regional divisions of the South African Republic were destined to shift almost continually over the course of the twentieth century, Jeppe’s map remained a highly accurate representation of its settlements and landscape.