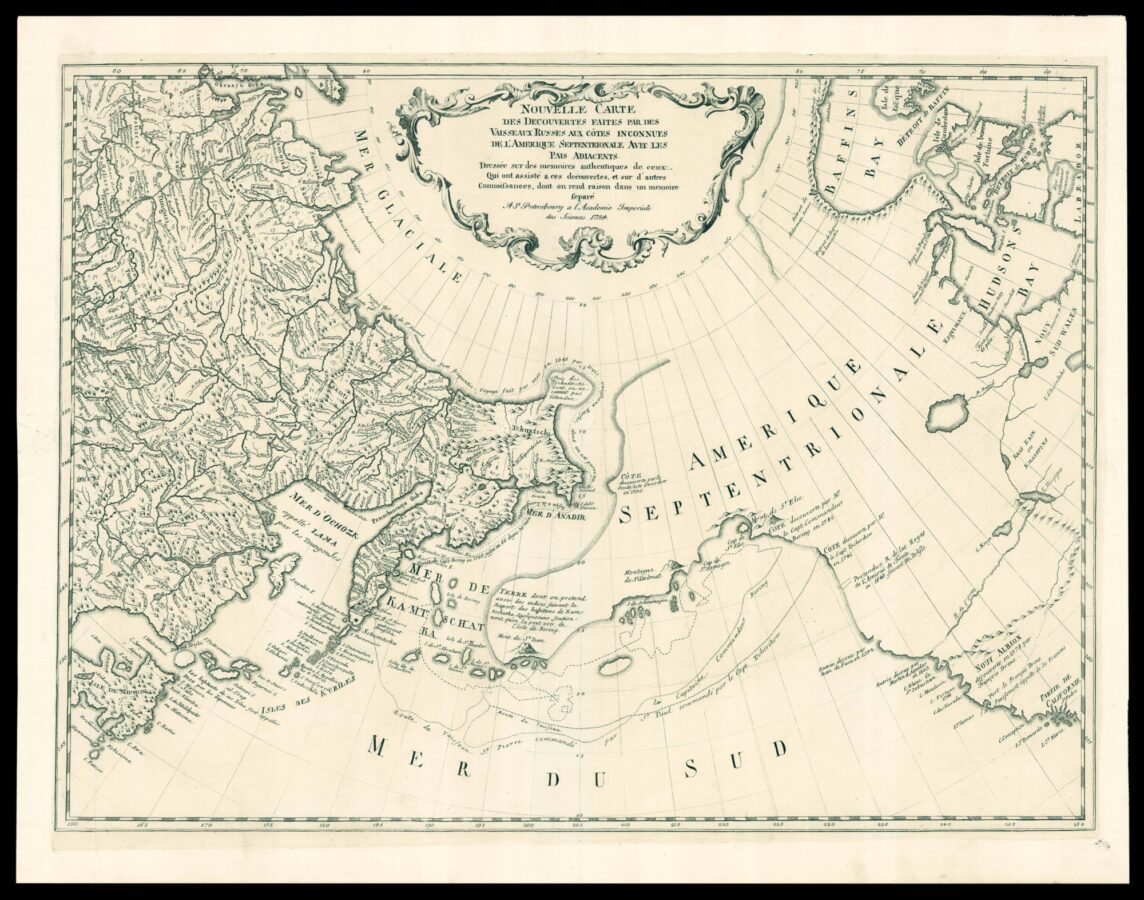 The very rare first edition of Gerhard Friedrich Müller’s map of the Arctic, which weighed into contemporary controversy over the Northwest Passage. Müller (1705–1783), a German scientist working at the Academy of Sciences in St Petersburg, participated in the second Kamchatka expedition with Vitus Bering and Alexei Chirikov. Vitus Bering led the first European expedition to Alaska from Kamchatka in 1728, heading east in an attempt to reach America. In 1732 Mikhail Gvozdev saw the eastern coast of the Diomede Islands in what is now the Bering Strait, prompting further investigation. In 1741, Bering set off on the second Kamchatka expedition, accompanied by Alexei Chirikov. The two men explored the coast of Alaska and found the Aleutian Islands, then separated: Chirikov continued to Baranof Island but eventually returned after an exploratory vessel disappeared, and Bering was shipwrecked on Bering Island, where he died. His crew made a vessel from the wreckage and returned the following summer.

Müller’s map was drawn from his experience on the expedition. As well as showing the discoveries made by Russian explorers, it was also intended as a rebuttal of the geographical theories advocated by the French cartographers Guillaume Delisle and Philippe Buache, who claimed that the imaginary Spanish Admiral de Fonte had discovered a sea passage through North America. The map accompanied an anonymous pamphlet by Müller entitled ​‘Lettre d’un officier de la marine Russienne à un Seigneur de la Cour concernant la Carte des nouvelles découvertes an Nord Traduite de l’original russe à Berlin chez Hande et Spener’, published in 1753, which politely but firmly corrects Delisle’s geography and his account of the Bering expedition, including the conduct of Delisle’s brother Louis de la Croyere. This map, also anonymous, was printed and distributed by the Academy of Sciences in Russian and French in 1754, and likewise rebuts Delisle and Buache’s claims. It confirms the existence of a body of water between Asia and North America, and described the routes taken by Bering and Chirikov. He situates two promontories on the way into the strait; one with a dotted outline labelled ​“Pais des Tschuktschi”, and another further south labelled ​“Serdste Kamen”; the latter was later proved by Captain James Cook to be imaginary. It suggests a new outline for the Aleutian Islands, showing them with a dotted line extending into the North Pacific, and is therefore the first map to give an approximate outline of the Alaskan peninsula. This feature was nicknamed the ​“turtle’s-head” peninsula by critics. Although the area Müller suggests that the archipelago might cover is too wide, he was correct to note that it extended much further than had previously been thought.

Müller writes that in some parts his role in the map ​“has been no more than to connect together by dots, according to probability, the coast seen at various places”; unlike Delisle and Buache, he did not present his account as definitive, but a compilation of the best available information. The ​“turtle’s-head” peninsula was an example of this. He did follow the French cartographers in incorporating discoveries in America into the Russian explorations; however, although the Admiral de Fonte is mentioned on the American coast, he does not show the mythical ​“Sea of the West”, and so does not suggest that there is a sea passage through America between the Atlantic and the Pacific. Müller’s map was unpopular in Europe; English and French commentators were keen to believe in the existence of an easily accessible and navigable northwest passage. If the peninsula shown by Müller existed, it would make the journey around it to Asia considerably harder. Furthermore, Müller was accused of deliberately exaggerating the difficulty of the passage on behalf of the Russian government, in order to discourage other nations from attempting to use the passage.

This first edition, printed in 1754, is much rarer than the second edition in 1758 and the 1766 Dutch version published by Marc Michel Rey in Amsterdam. There are seven copies of this edition in American institutions, and two in German institutions. We have only been able to trace one copy appearing on the market, sold by Parke-Bernet in the Frank Streeter Sale in 1969.