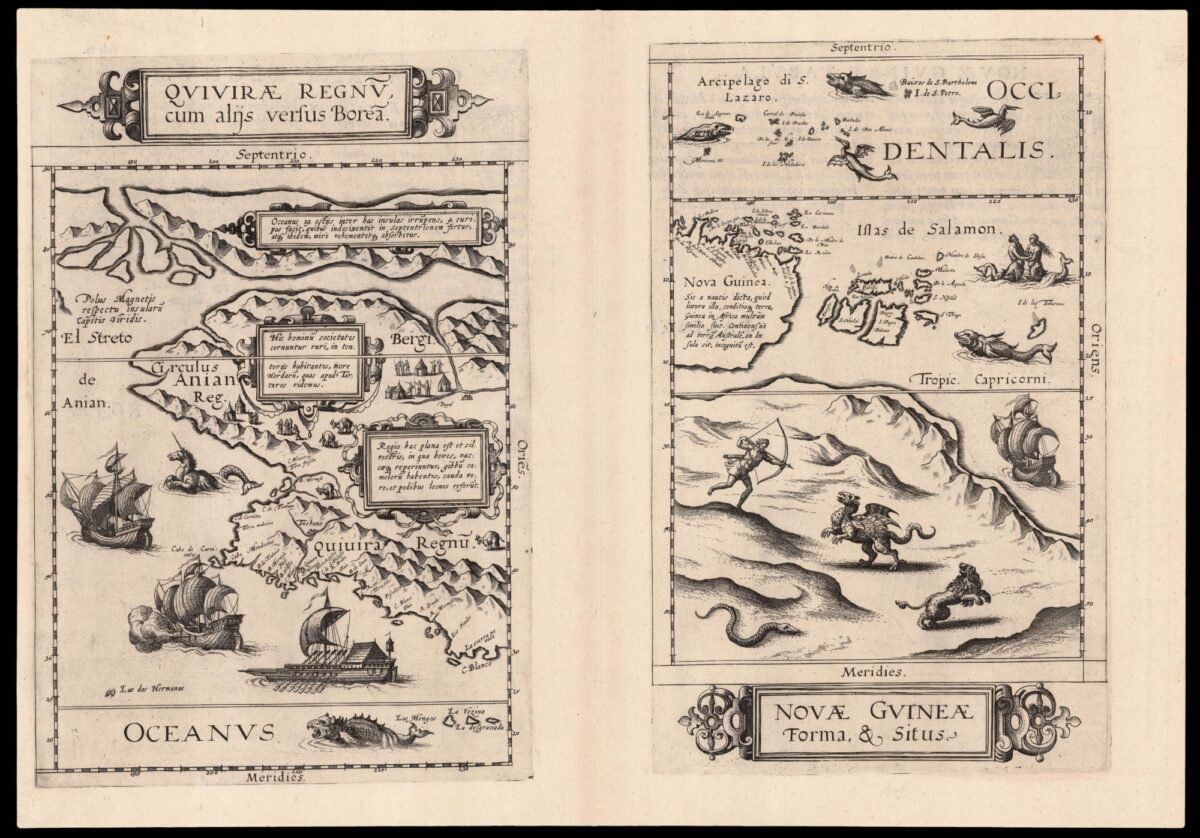 The first map to focus on ​“Australia”

From the second edition of de Jode’s ​“Speculum orbis terrae”. Alaska Quiuire regnu cum alijs versus Borea (Burden 82), the first published map devoted to the west and northwest coasts of North America from the below the Tropic of Cancer to the North Pole, adorned with mythical sea creatures and ships. The map covers the west coast of North America from 30° north latitude (about a quarter of the way down the peninsula of Baja California) through all of Alaska. Among the more significant place-names along the coast are Quivera, the mythical kingdom sought by Coronado, and Cape Mendocino, plotted with fine accuracy at just above 40° (the modem city lies at 39°). The land is divided into three major kingdoms, of which one is from Coronado (Quivera) and two are transplanted from the Asia of Marco Polo (Anian and Bergi). The Arctic region is depicted according to Mercator (who in tum derived it from a medieval text). The magnetic pole is shown, and interestingly, de Jode was aware of the problem of magnetic declination, as he specifically states that he is showing the pole from the perspective of the Cape Verde Islands.

The second map is Cornelius’ of northern Australia and New Guinea, Novae Guineae Forma & Situs, decorated with the most beautifully ornamented dragons and lizards: ​“This region is even today almost unknown, because after the first and second voyages all have avoid from sailing thither so that it is doubtful even until today whether it is a continent or an island. The sailors called this region New Guinea because its coasts, state and conditions are similar in many respects to the African Guinea. Andreas Cosalius seems to call it Peccinacolij. After this region the huge Australian land follows which — as soon as it is once known — will represent a fifth continent, so vast and immense is it deemed. In the east the Solomon Islands join up, in the north the S. Lazarus Archipelago; it takes its beginning at two or three degrees south of the equator. In the west it is, if not an island, connected up with the Australian continent.” (De Jode, verso of the map).

The map is, according to the title, intended as a map of New Guinea, though it includes the coast of Terra Australis, and is thus often considered, if only poetically so, the first map to focus on ​“Australia”. It also provides a close focus of the new-discovered Solomon Islands, whose mapping was influential for the entire ocean. Further north, the map includes islands, principally in Micronesia, that were discovered by Spanish explorers in the earlier sixteenth century. New Guinea is correctly depicted as an island, though this was likely from guesswork rather than empirical data. Since the Solomon Islands, though seemingly of little importance today, were a principal impetus for Pacific exploration for two centuries, de Jode’s maiden close focus on them is of interest. Discovered in the course of a 1567–68 voyage from Peru by Alvaro de Mendafia y Neyra, they were entwined with the search for a southern continent and forcibly endowed with qualities befitting their name, a name that was selected for them before their discovery. They were then ​‘lost’, and for two centuries were sought by numerous navigators, plotted in widely disparate I meridians, and argued over by theorists. Yet when finally they were rediscovered in the eighteenth century, the explorers who did so did not recognize them as being Mendafia’s lost isles until French geographers solved the puzzle and further expeditions confined the identity.