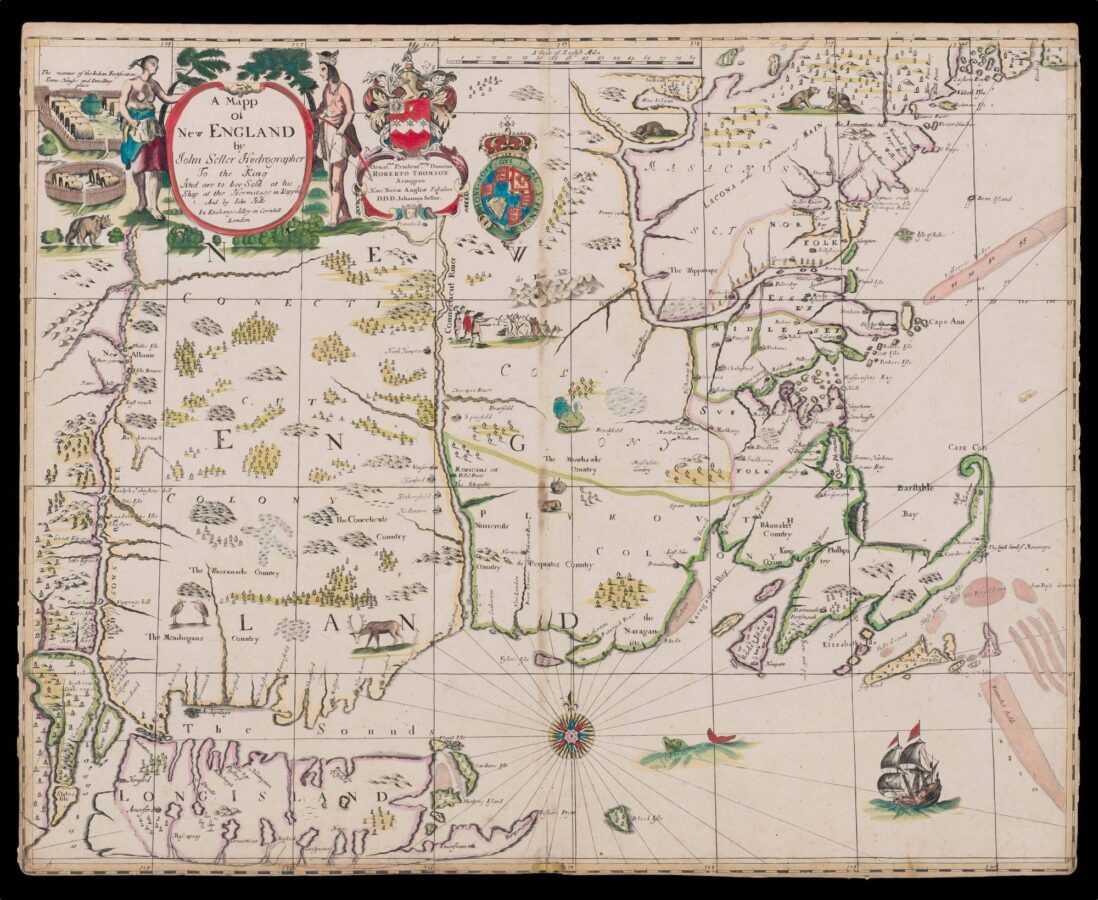 A Mapp of New England by John Seller Hydrographer To the King. And are to bee Sold at his Shop at the Hermitage in Wapping And by Iohn Hills in Exchange Alley in Cornhill.

A ​“great rarity…the first map of the area we now call New England” (Burden). Published for inclusion in John Seller’s ​‘Atlas Maritimus’, 1676, although it is very rarely found with it: only one institutional example of this issue is known still bound in the atlas, at the John Carter Brown Library.

Published at a time of heightened interest in New England and King Philip’s War, Seller’s map contains up-to-the minute information. Advertised by him in the ​‘London Gazette’, in early April 1676, at the heart of the map is a dramatic scene, showing the Colonists and the local Indians firing on each other at Hadley, a battle which happened only as recently as the 1st of September, 1675. Many of the other place-names on the map are connected directly to the conflict, and were then best known because of it: Swansey was razed to the ground in June of 1675; and Mendham (now Mendon), Brookfield, Dearfield, Lancestar, were all wiped out by the middle of September; Springfield and Hatfield were destroyed later in the year.

The survival of the original colony at Plymouth had depended heavily on the protection of the local Wompanoag Indian communities, under the leadership of Massasoit, who had signed a treaty with Governor William Bradford in 1621, making them allies against any attack, but particularly from the rival Narraganset tribe. Mutual respect and cooperation resulted in resources for the Colonists, in return for limitations on their territorial expansion. However, as the Colonists thrived and their population expanded, so did their territorial claims.

In 1662, Massasoit died, and was succeeded by his two sons, neither of whom trusted the Colonists particularly. The elder son died, believing he had been poisoned by the Colonists, and was succeeded as Sachem by his younger brother, Metacomet, soon to be known as King Philip. He created secret alliances with other local, formerly rival tribes, including the Narraganset, Nipmuc and Podunc. In the early summer of 1675, King Philip’s ​‘army’ began a campaign against the colonists, and on September the 9th, after a number of settlements had been sacked, the New England colonies (Connecticut, Massachusetts and Plymouth) declared war. Throughout 1675, King Philip’s forces held the upper hand. It wasn’t until the spring of 1676, when Seller conceived of his map, that the tide began to turn in the Colonist’s favour. King Philip, weakened and betrayed, was tracked down and killed on the 12th of August, 1676.

The casualties on both sides were enormous, and were counted in the thousands. The immediate financial cost to the colonies was estimated at £100,000; and early expectations were that it would take the best part of twenty years for farming and trade to return to pre-conflict levels. However, with a Peace Treaty signed in April 1678, which provided for the return of all colonial land and captives, the barriers to expansion were removed, particularly in the southern parts of New England, where a whole new territory became open to settlement.

Seller’s is the earliest printed map to include the results of William Reed’s original survey of 1665. It incorporates information from a now lost manuscript map of about 1675, also a common ancestor of Robert Morden and John Berry’s more general map of the eastern seaboard, of the same year; and William Hack’s manuscript map of about 1694, that now hangs in Pilgrim Hall, Plymouth Massachusetts.

The borders of Seller’s map reflect Reed’s survey of 1665, and generally support the colonial boundaries, as described in the first Massachusetts Charter of 1628: bounded by New York and the Hudson River in the west, a vague Great Lakes area in the north, and Long Island in the south. The relative position of the Hudson, Connecticut and Merrimack rivers are clearly shown, even if not entirely accurate. ​“It provides the first great cartographic improvement of the area since the William Wood map of 1634” (Burden).
The map is neatly divided into three distinct colonies: the Connecticut Colony, the Massachusetts Colony, and the Plymouth Colony, which formed what was then known as the New England Confederation. It also shows with great thoroughness, the territory as inhabited by the different local Indian tribes, as: The Waoranacks Country, the Monhegans Country, The Conecticuts Country, The Mowhawks Country, the Pequates Country, the Ninicrofts Country, the Wippanaps, the Naragansets, Pokanaket Country, and King Phillips Country.

A very decorative map, it includes a vignette of an Indian village, warriors, and native animals, in a style first seen in Blaeu’s ​‘Nova Belgica’, 1635; the Royal Coat of Arms, and a dedicatory cartouche to Sir Robert Thomson; degress of latitude and longitude in the border; and a scale of miles to ​‘80’. This is an example of the third issue, with the addition of new hills just to the lower left of the Royal Arms.

Seller (c1632-1697) is one of the most important figures in English map-publishing. He was a mapmaker, chartmaker, compass-maker and mathematical instrument-maker; an author, mapseller, bookseller and globeseller and cartographic publisher, successively Hydrographer to Charles II and James II.

Although some examples of the first issue of his ​‘Mapp of New England’ published separately with an accompanying text, it was destined for inclusion in his ​‘Atlas Maritimus’, the first English sea-atlas, published to compete with the Dutch. Other separately issued maps of note, include his map of New Jersey (1674), and a pair of celestial charts, the Southern Hemisphere drawn by Sir Edmund Halley (1678).

Perhaps Seller’s greatest legacy was a series of chart-books to be published under the heading ​‘The English Pilot’, covering all the navigations of the world from 1671 to 1675. By the fifth volume, it seems that Seller’s ambitions had exceeded his resources; by 1677 Seller had taken William Fisher, John Thornton, John Colson and James Atkinson into partnership. The partnership was short-lived, and several titles passed out of Seller’s hands.

The only other known examples of this issue, in America, are held at: the Huntington, JCB (in an example of the ​‘Atlas Maritimus’), and the NYPL. One further example is found in the Pepys Library in Cambridge, England. No previous auction record for this issue, has been found; and only two examples of any issue, the first, to have sold at auction are recorded: in a composite example of the ​‘Atlas Terrestris’ at Sotheby’s, November 7th, 1985, lot 59; and in the second Streeter sale, April 19th, 1967, lot 633.

with the Old Print Shop, label on frame. 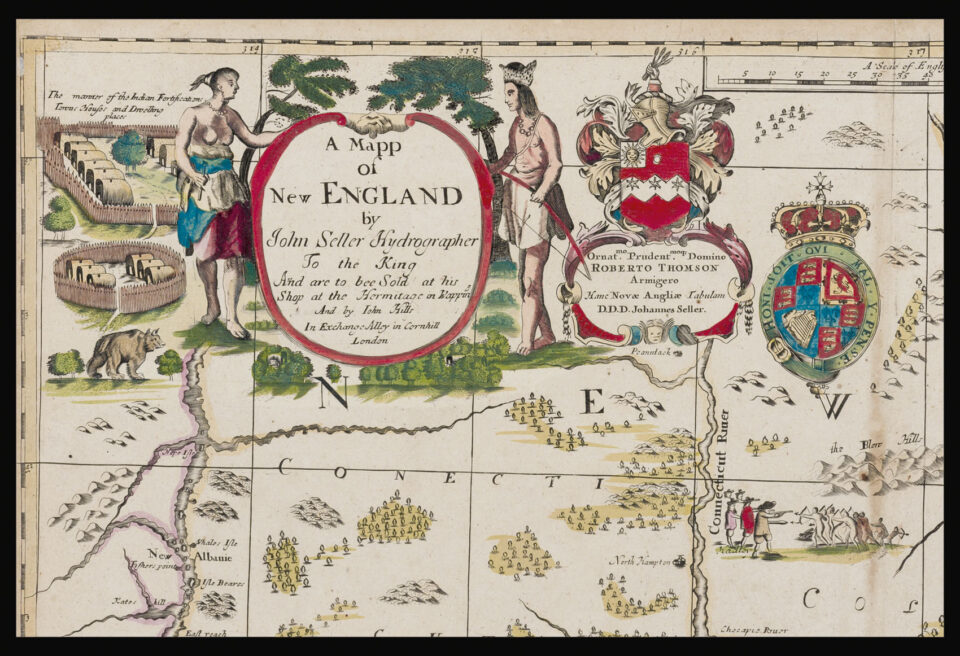