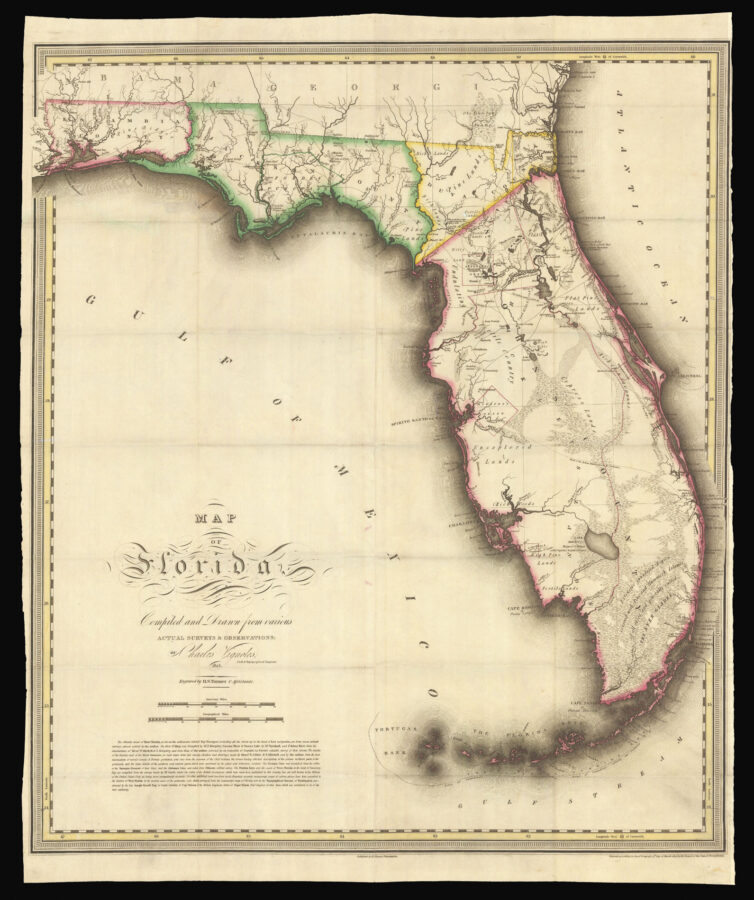 The First Map of Florida as an American Territory

Vignoles’ map was the fundamental depiction of Florida for the nineteenth century. It was first map to show Florida as an American territory, the first map to name the everglades, and served as the pattern for the subsequent mapping of the peninsula for several decades.

Born in England of a Huguenot family, Vignoles served in the British army and then went to South Carolina where he was appointed assistant to that colony’s Surveyor General. In 1820 he went to Florida and became surveyor and engineer to the City of St. Augustine in 1821. Shortly after his appointment, a member of the Land Claims Commission of Florida, recognizing the desperate need of the new territory for an adequate map, suggested that Vignoles should produce one. He spent two years surveying and exploring the territory.

His first expedition began in February 1822, accompanied by a U. S. General and his staff. He was commissioned to map the east and southwest coasts, including the Florida Keys. A second expedition followed almost immediately, which mapped the interior. Vignoles’ map was engraved and published in Philadelphia in 1823 by the firm of Henry Tanner, then the leading cartographical publisher working in the United states. Vignoles’ topographical memoir ​“Observations upon the Floridas” was published in the same year in New York, independently of the map.

Among its many distinctions, Vignoles’ map is the first to name the Everglades, and the first to locate a settlement at the site of Miami (Cape Florida Settlems.”) The map is rich in place names, notations and
Indian routes, descriptions of the land, such as ​“Rich Open Savanna”, ​“High Pine Lands”, ​“Cypress Lands”, and ​“Unexplored Lands”.

Vignoles shortly returned to England. He became a fellow of the Royal Astronomical Society in in 1829, the Royal Society in 1855, and president of the Institution of Civil Engineers in 1869.

The map is quite rare, with no record of a copy sold at auction. Vignoles’ biographer went so far as to state ​“it has not bee possible to trace a copy of Vignoles map.” (Keith H. Vignoles 1982). Never-the-less, there is a damaged copy at the Library of Congress, as well as a few in the hands of other institutions and private collectors.