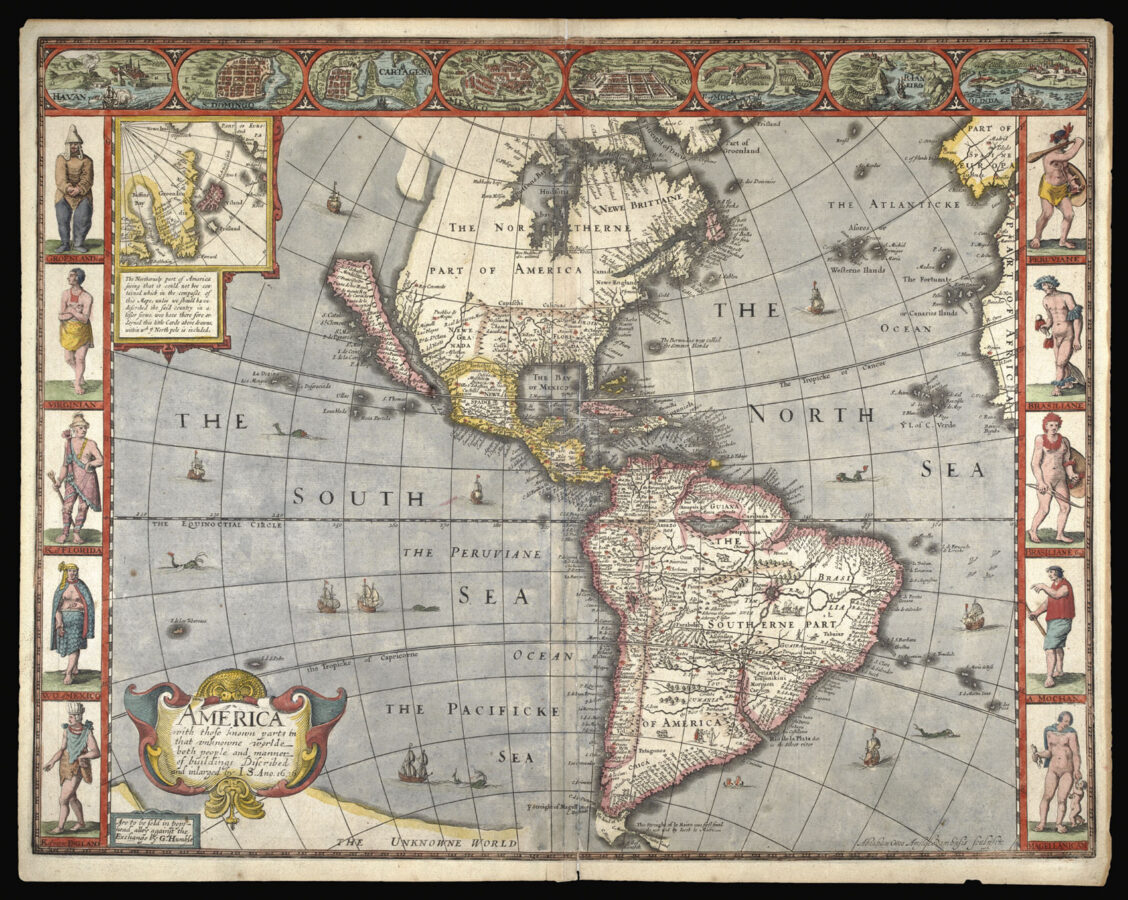 “The first map in an atlas to depict California as an island, and an accurate east coast of North America” (Burden)

For this map Abraham Goos drew ​“on his engraving of North America in 1624, and the Briggs of 1625, to depict California as an island once more. He was the only Dutch cartographer to do so for some considerable time. There are five fewer place-names in California than the Briggs. He includes a similar faint northwest coastline and Strait of Anian. ​‘Brasil’ and ​‘Frisland’, remnants from the sixteenth century, make a stubborn appearance in the North Atlantic. The fledgling colonies of Plymouth in New England, and ​‘Iames Citti’ in Virginia, are both recognised. Decorating the whole are three attractive borders. The two sides illustrated the natives of the continent, the left bears those of the north, and the right those of the south. Despite the map’s obvious attention to the English presence in North America, none of the eight towns represented in the third is from that part. This is owing to the lack of any contemporary views to draw on” (Burden).

John Speed is perhaps the most famous single figure in the early history of the English map trade. He was a member of the Merchant Taylors’ Company, made a freeman of the city in September 1580, and later Fellow of the Society of Antiquaries. By training he was probably a rolling-press printer, but by interest he was a historian, and Queen Elizabeth granted him a sinecure in the Customs House, to give him the opportunity to pursue these interests.

His earliest cartographic publications were historical; in 1595, he published a wall map of the Holy Land, ​‘Canaan as it was Possessed both in Abraham and Israels Dayes’, a two-sheet map of The Invasions of England and Ireland with all their Civill Warres since the Conquest’ (1601) and a wall map of England, Wales and Ireland showing the same information, [1603–1604].

In 1611, he prepared two Bible maps, the larger inserted in folio editions of the great King James Bible, the smaller in octavo printings; Speed also secured a privilege, dated 31st October 1610, to ensure that the map was inserted in every copy of the Bible sold, a lucrative arrangement that the Stationers’ Company eventually felt impelled to buy out from his heirs.

Speed always considered his ​‘History of Great Britaine’ (1611) his major work, but his reputation was established by the companion atlas volume, ​‘Theatre of the Empire of great Britaine’, published in 1612, the first printed atlas of the British Isles. The earliest map prepared was ​‘The County Palatine of Chester’ [1604], but the death of the engraver William Rogers meant that Speed’s publishers had to turn to Jodocus Hondius, an Amsterdam engraver, to prepare the maps.

The atlas was completed in 1612; the maps are notable for the decorative elements included, evidence of Speed’s interest in antiquities, and most have inset town-plans, the first series of printed town-plans of the British Isles, and were issued with descriptive English text printed on the verso. In the hands of different publishers, there were numerous editions to 1676 with text; later printings into the 1770s were issued without text.

Towards the end of his career, Speed also prepared a world atlas: the ​‘Prospect of the most Famous Parts of the World’ (1627), the first world atlas compiled by an Englishman and published in England, although the maps were engraved in Amsterdam, using Dutch models. Again, this was printed with English text on the verso, and reprinted thereafter. While early editions are rarer, perhaps the most important edition was the 1676 printing, which added newly prepared English maps of New England, Virginia, the Carolinas, Barbados and Jamaica.

Speed’s publishers also prepared two pocket atlases, colloquially called ​“miniature Speeds”, reproducing the ​‘Theatre’ and ​‘Prospect’ on a smaller, less expensive, format. The county atlas, ​‘England, Wales, and Ireland: … their several Counties abridged’, first appeared in 1627, although there is an earlier proof version from about 1620; the ​‘A Prospect of the Most Famous Parts of the World’ appeared in 1646; both were reprinted in several editions up to 1675. However, Speed himself probably had little creative contribution to either atlas.