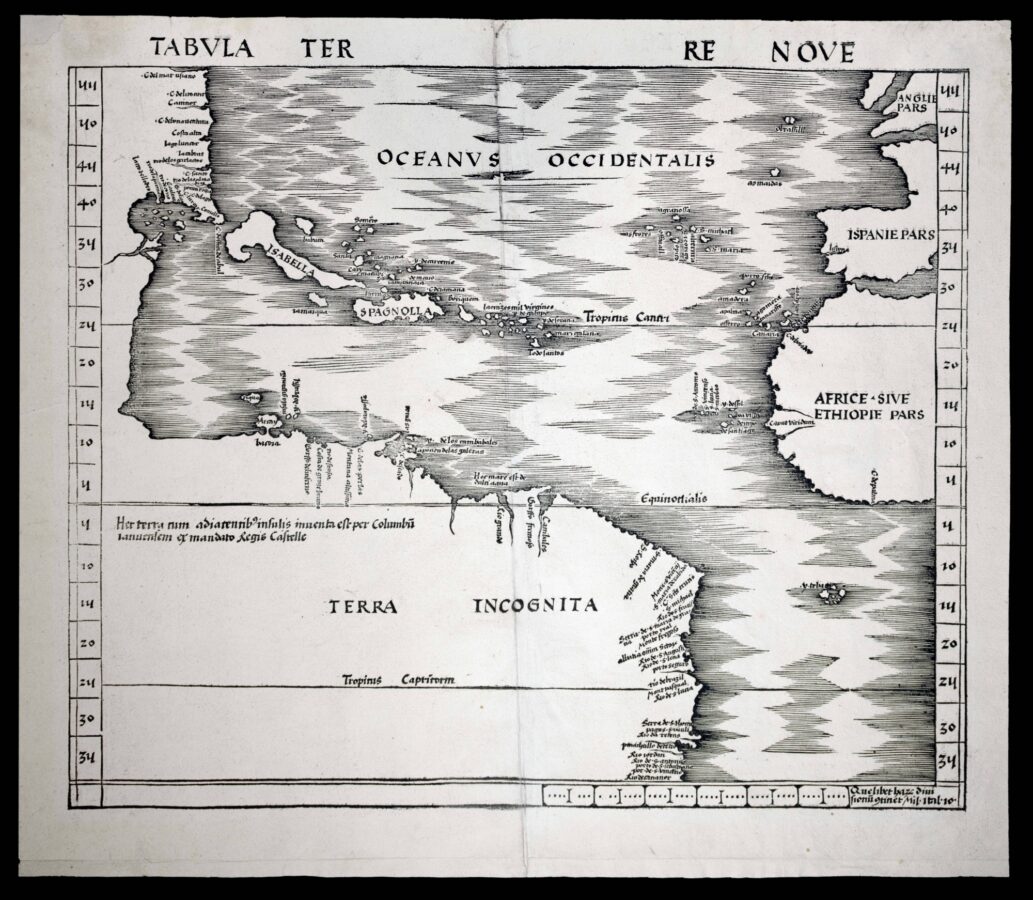 The first map devoted to America to appear in an atlas

By PTOLEMAEUS, Claudius and Martin WALDSEEMULLER, 1513

Waldseemuller’s map of the New World shows the Atlantic coast of the Americas from latitudes 35 degrees south to 55 degrees north, including 20 place-names on the North American coastline. An apparent Gulf of Mexico, the Florida peninsula, Cuba as Isabella and Hispaniola, and across the Atlantic portions of the British Isles, Spain and Portugal and Africa are visible.

First edition, published in Schott’s edition of Ptolemy’s ​‘Geographia’, Strassburg, 1513, the first modern atlas, prepared by Martin Waldseemuller using the translation of Mathias Ringmann, and one of the most important editions of Ptolemy, containing many new regional maps: twenty new maps based on contemporary knowledge, ​“unlike many of the alleged ​‘new’ maps produced by earlier editors, [they] contained a great deal of new information, and in nearly every case they were decided improvements over anything that had been previously offered…” (‘The World Encompassed’, 56), were included in addition to the traditional body of twenty-seven Ptolemaic maps derived from the 1482 Ulm edition.

In 1507, from their scholastic community in St. Die, Waldseemüller and Ringmann had collaborated on the ​‘Cosmographiae Introductio’ which accompanied Waldseemuller ​‘s map of the world ​‘Universalis Cosmographia Secundum Ptholomaei Traditionem et Americi Vespucii Alioru[m]que Lustrationes’. In the booklet they attribute the discovery of America to Vespucci, and then name the landmass after him on the map. In this 1513 map Waldseemuller tries to right his mistake by inscribing the area now known as Brasil ​“Hec terra cum adiacentib insulis inuenta est per Columbu ianuensem ex mandato Regis Castelle” / ​“This land with its adjacent islands was discovered by Columbus, sent by authority of the King of Castile”. However, he was unsuccessful, and America has been named so ever since.

The place-names shown on the North American coastline are largely from Portuguese sources, ​“most notably the Cantino portolan chart of 1502 and the Caveri of ca. 1505. What appears to be the Gulf of Mexico illustrates possible knowledge of an unrecorded voyage before that of Alonzo Alvarez de Pineda in 1519. Similarly, the Florida peninsula is shown before recorded knowledge of it could have reached Europe. Cuba is here named Isabella after the Queen of Spain and positioned further north than is actually seen” (Burden 3).

Martin Waldseemüller (c1470-c1521) was a German scholar and cartographer. He studied under Gregor Reisch at the University of Freiburg, and then moved to Basel in the late 1490s, where he met the printer Johannes Amerbach. In 1506 he moved to Saint-Dié in Lorraine, where Duke René II had established a humanist academy, the Gymnasium Vosagense. Waldseemüller was one of the earliest members, providing expertise in both cosmography and theology. It was at the Gymnasium that he met Matthias Ringmann and Jean Basin de Sendacour, with whom he would collaborate on his greatest geographical work. The trio had originally aimed to produce a new edition of Claudius Ptolemy’s ​‘Geographia’, inspired by the versions already published throughout Europe. However, this idea was abandoned after they read about Amerigo Vespucci’s voyage to the Americas. Together with Portuguese accounts of circumnavigating Africa, proving that the Indian Ocean was not landlocked, they dealt a serious blow to Ptolemaic geography. Instead, they decided to create a map which compared Vespucci’s geographical information with Ptolemy’s, along with an explanation of why they had deviated from Ptolemy’s precepts.

This work, ​‘Cosmographia introductio’, was published in 1507. It contains the first printed instance of the name ​‘America’ being applied to the discoveries over the Atlantic: ​“The fourth part of the earth, we have decided to call Amerige, the land of Amerigo we might even say, or America because it was discovered by Amerigo”. The book was accompanied by a set of small woodcut map gores, the first known printed gores for a terrestrial globe ever made, which showed a landmass meant to represent South America labelled as ​‘America’. The globe gores were a companion to the ​‘Universalis cosmographia’, the great world map in twelve sheets by Waldseemüller. It was unusually large for a woodcut map, and drawn using an adaptation of the second method of projection advocated by Ptolemy. It shows the Americas as one contiguous continent, and was the first map to give this name to the new discoveries.

Waldseemüller himself was reluctant to identify America as a continent, and would never use the name America in any of his later work. When he finally published his edition of Ptolemy in Strasbourg in 1513, he labelled South America ​‘Terra Incognita’. However, nearly every significant mapmaker for the next quarter of a century relied on his work, popularising his geography and terminology. Although 1,000 copies of the ​‘Universalis cosmographia’ were printed according to Waldseemüller, only one survives. It was sold to the Library of Congress for $10 million in 2003.

Claudius Ptolemy (c100-c170) was a Greco-Roman scholar, most famous for the three works he produced on astronomy, geography and astrology. Almost nothing is known of Ptolemy’s life save that he lived in Alexandria, and that he was a Roman citizen, indicated by his Roman nomen of Claudius. He wrote his most famous work, the ​‘Geographia’ around 150 AD, using an atlas by Marinus of Tyre as the foundation, and adding information from Roman, Persian and Babylonian sources. Alexandria was an intellectual centre of the ancient world, and it was also a vital point on trade routes between the Far East and Europe, giving Ptolemy access to the knowledge of travellers from all over the empire. The ​‘Geographia’ was intended as a supplement to his earlier work, the ​‘Almagest’, showing how to put the astronomical principles outlined in the first work into practice, and providing tables of co-ordinates of important places throughout the world. What began as a simple list became a synthesis of classical geographical knowledge from the millennium; Ptolemy collated and compared every text he could lay hands on. The ​‘Geographia’ eventually ran to eight books. The first was concerned with the practice of geography and cartography; the middle six were filled with tables of co-ordinates for over 8,000 locations; and the final book suggested a method of dividing the oikuomene (the Greek term for the known world) into 26 regional maps: ten of Europe, four of Africa, and 12 of Asia, preceded by one of the world, for which he offers three projections. This format would be retained in atlases for centuries. Although the Geographia gives instructions for the construction of maps, it is unclear whether the original manuscript versions of the text contained any; at any rate, later copyists reconstructed maps from the co-ordinates given in the text, rather than existing examples. The first modern printed edition with maps was not published until 1477 in Bologna. 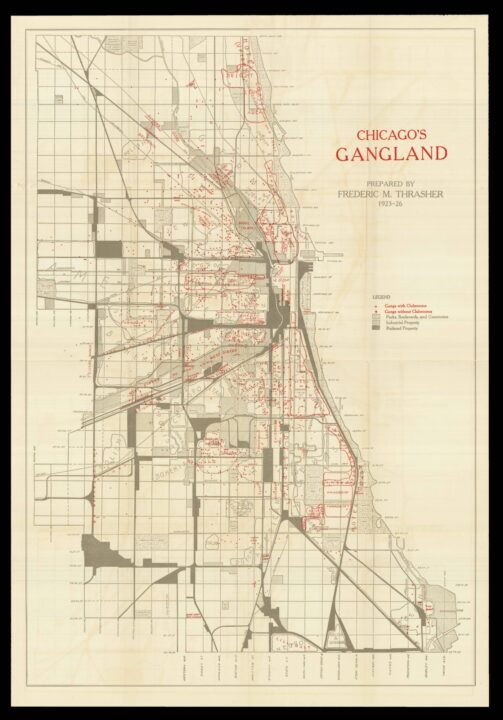 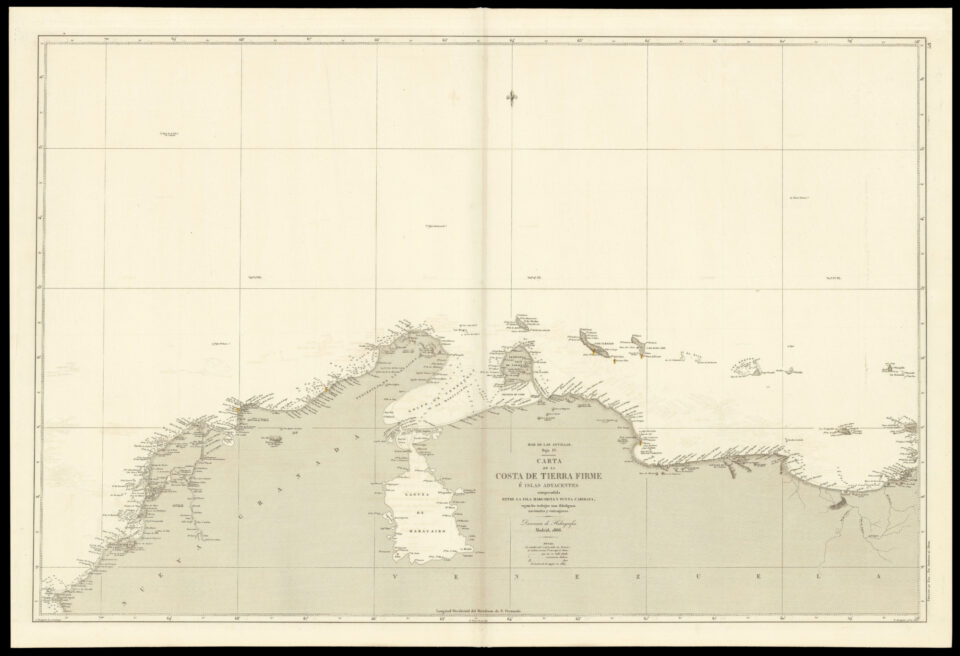 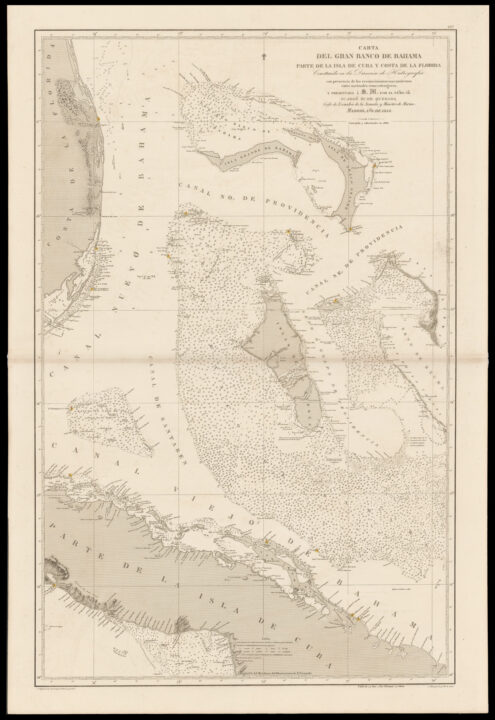 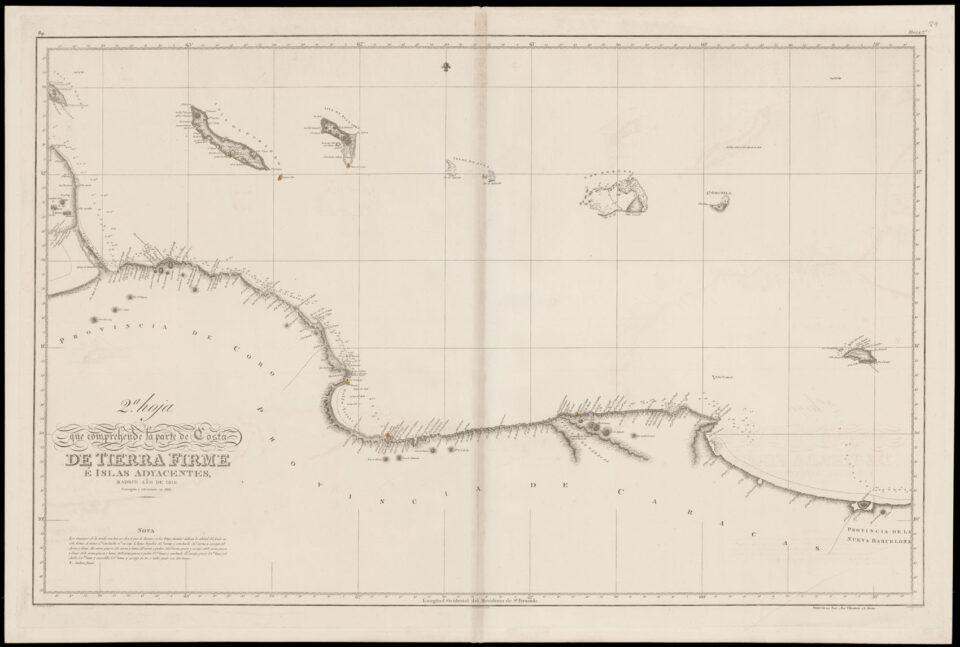