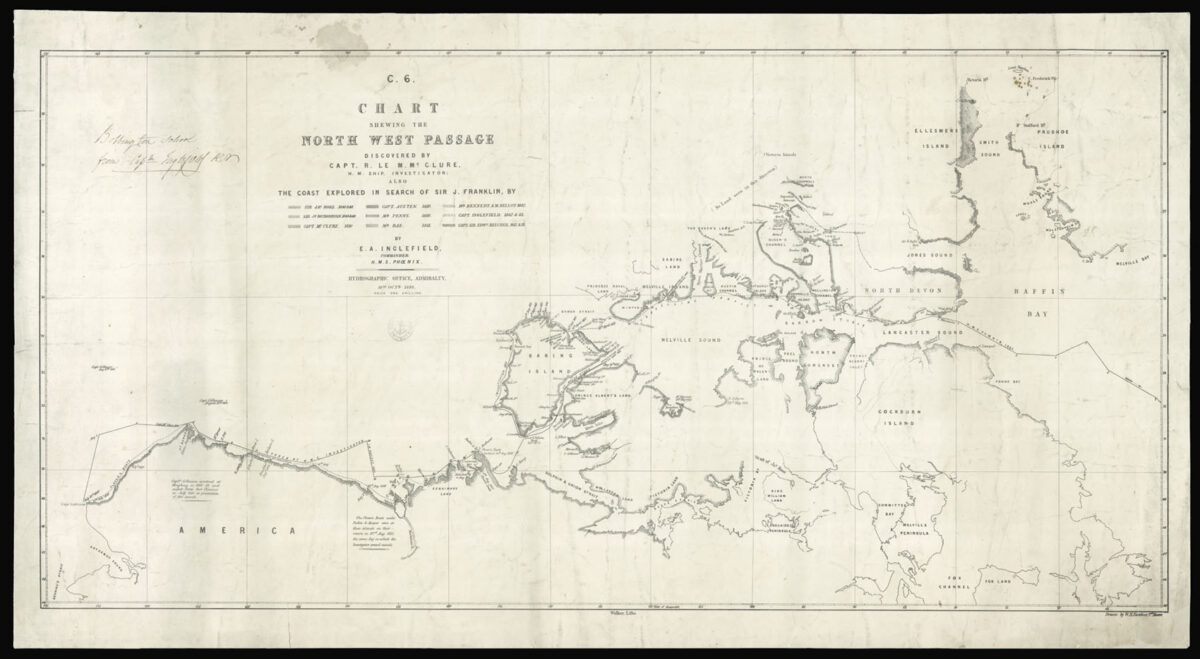 The first man to traverse the Northwest Passage

This is the first chart to show McClure’s ground-breaking discovery of the North-West Passage. Travelling on board the Investigator in 1850, Robert McClure led one of the many expeditions launched in search of explorer James Franklin, who had become trapped in the Arctic while searching for the seaway linking the Atlantic and Pacific Oceans. In doing so, McClure himself became the first man credited with navigating the North-West Passage, although he made much of his journey over ice rather than by sea, his path represented on this chart by a solid line. Passing through the Bering Strait (here labelled Behring’s Strait), McClure discovered and named the even narrower Prince of Wales Strait. The line showing the Investigator’s journey ends abruptly at the North-West promontory of Baring Island, where the ship was frozen for the winter. And so, the men set up their winter quarters for 1850 on the ship, where they took part in English and maths lessons, hunted musk oxen and even performed plays. After circumnavigating Baring Island in the latter half of 1851, the Investigator was once again forced to stop by the ice, passing the next six months at Mercy Bay, here said to be ​“abounding with reindeer” which kept the crew alive throughout the harsh winter. McClure subsequently undertook an expedition to Melville Island by sledge, and although his small team travelled for 26 days, they failed to reach the island and returned to their still-frozen ship. The following winter, with the health and strength of the crew greatly deteriorated, McClure made the decision to abandon the Investigator, and travel over the ice to seek help from other ships, their route marked by a dotted line on the chart. Reaching Beechey Island in May 1853, the men were met by the H.M.S. Phoenix, captained by Inglefield, on which they returned to Britain.

Although Inglefield had not succeeded in his original mission to rescue Franklin, he did return McClure’s crew to safety, and was subsequently able to make this chart of the newly-discovered North-West Passage, the first hydrographic representation of the area. Although he produced many watercolour paintings of the Arctic landscapes and wrote a book recounting his expedition, Inglefield himself was not responsible for the drafting of this map, which was drawn by W.H. Fawekner, Second Master aboard the Phoenix, and published by John and Charles Walker.

To the upper left of the present example is a hand-written dedication by the Captain Inglefield to Bobbington School.