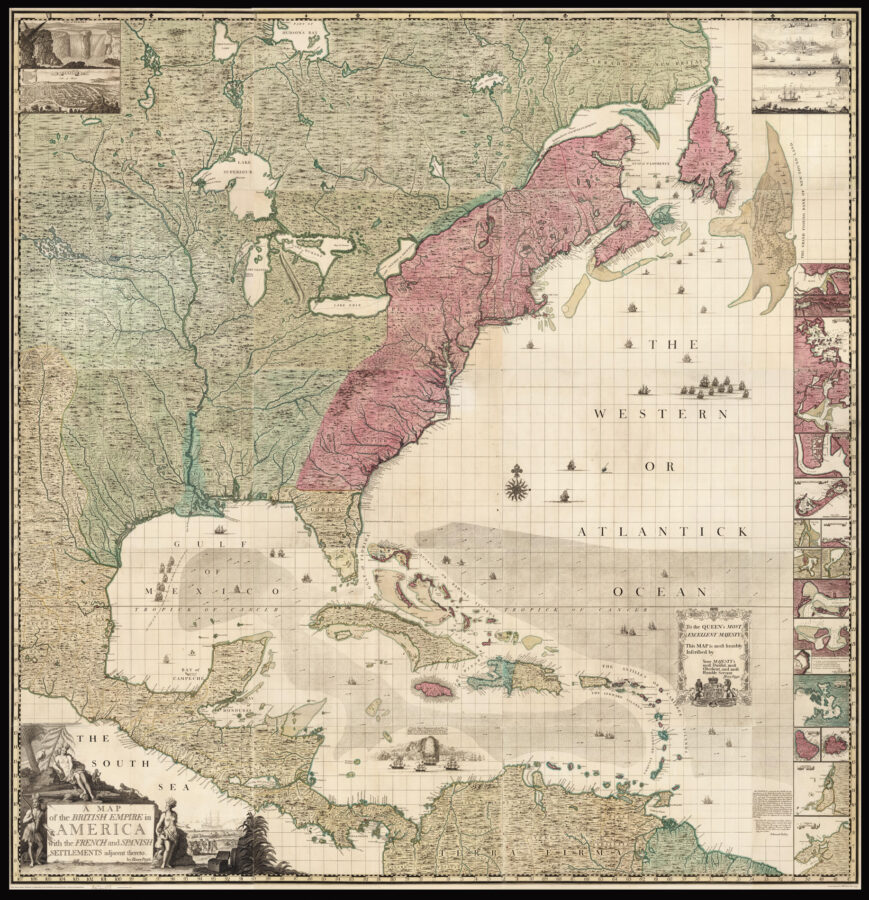 Henry Popple worked with the Board of Trade & Plantations in 1727 during a period when boundary disputes among both the colonists and with the French began to accelerate the need for detailed maps. In 1730 the Board began requesting detailed maps of the entirety of the provinces and contiguous regions. Popple issued an announcement for his map in 1731, but did not complete work on his 20-sheet map until 1733. Despite his connection to the Board of Trade & Plantations, Popple’s map was not a commercial success, and did not sell well until publication of the map was taken over by William Henry Toms and Samuel Harding in 1739. With the outbreak of the War of Jenkin’s Ear, the map found its commercial moment and sales soared. In 1746, the rights to Popple’s map were sold to Willdey and Austen, who published the map until Austen’s death in 1750. As noted by Barbara McCorckle:

Popple produced the map under the auspices of the Lord Commissioners of Trade and Plantations to help settle disputes arising from the rival expansion of English, Spanish and French colonies. At the time of its publication, ​“France claimed not only Canada, but also territories drained by the Mississippi and its tributaries — in practical terms, an area of half a continent” (Goss The Mapping Of North America p.122.) .

The careful demarcation of the disputed areas by color makes identification of whether a particular location was in one or another ​‘zone’ a great deal easier. Thus the full original color examples are particularly important in facilitating the graphical depiction of the international land disputes of the time.

​“British Americans frequently imported imperial maps during the eighteenth century. Decorative wall maps showing British possessions in North America were favorite articles, purchased primarily by the colonial elite. Strategically displayed in formal settings of the home or provincial office, these maps painted bombastic scenes of territorial conquest and signified the range of the British Empire. For example, maps like Henry Popple’s Map of the British Empire in America (1733) reached American audiences upon special orders by the Board of Trade and Plantations, and colonial politicians like Benjamin Franklin eagerly requested Popple’s map for public display”.

The present example of the map is almost certainly the edition of the map ordered by Benjamin Franklin in 1746 for the Pennsylvania Assembly (“two setts — one bound the other in Sheets”), next described in his Poor Richard almanac for 1748 and then again ordered by him (“as a wall map on Rollers”) in 1752.

As noted by Babinski, Samuel Harding and William Henry Toms took over the proprietorship of the map from Henry Popple in August, 1739 and advertised it frequently in the newspapers, with their last advertisement in July 1745 [Babinski, Notes 4–8]. The proprietorship of the map passed then into the hands of Stephen Austen and Thomas Willdey, with the imprint changed to show their names — Babinski assigns that date to circa 1746, but has verbally opined that the transfer could have occurred as early as the second half of 1745.

Only one other example of State 8 of the 20-sheet map is known to exist in full colour, with a full colour example of the matching Key Sheet in State 5 – both with the imprint of Austen & Willdey as sellers (per Babinski). However, that one copy at the Virginia Historical Society was not coloured in London by the original publishers — as is the case with our copy. Babinski claims that the VHS copy was coloured a few years after purchase in a highly irregular way, most likely in Italy in the 1750s – with the cartouches, views and oceans coloured in full – something never done by the original publishers of the Popple map, nor any other London map publishers.

The present example of the map includes the bookplate of James Arthur Taylor (late eighteenth and early nineteenth century English collector). The most recent owner is the noted Popple expert and author of the definitive book on Henry Popple’s map, Mark Babinski, who acquired the map in 2007 and is widely regarded as the leading expert on the topic. As noted by the Osher Library in its online exhibition of the Popple map:

​“only twenty copies of [Babinski’s] book have been printed (ten of which have been donated to map libraries in the U.K. and the U.S… ), Mr. Babinski’s research will be of great interest to a wide array of historians and map aficionados and deserves wider distribution.” 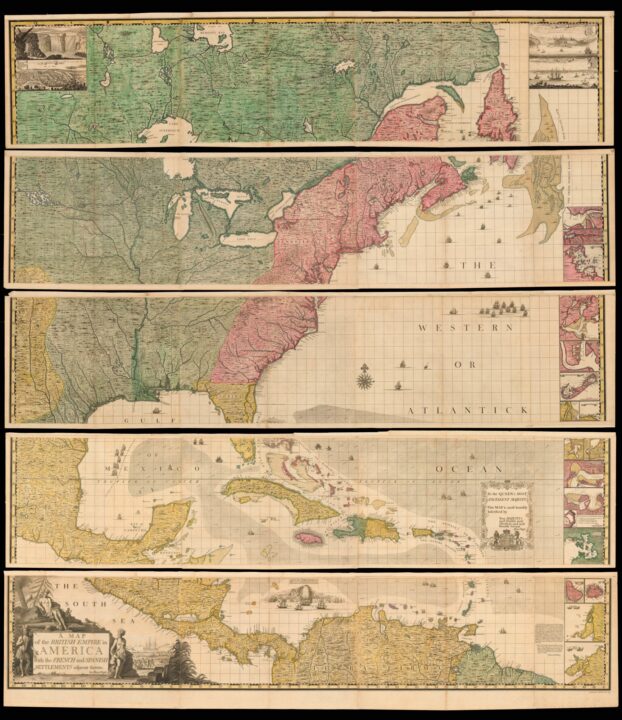 Henry Popple 1733 [but c1735]
A Map of the British Empire in America with the French and Spanish settlements adjacent thereto.