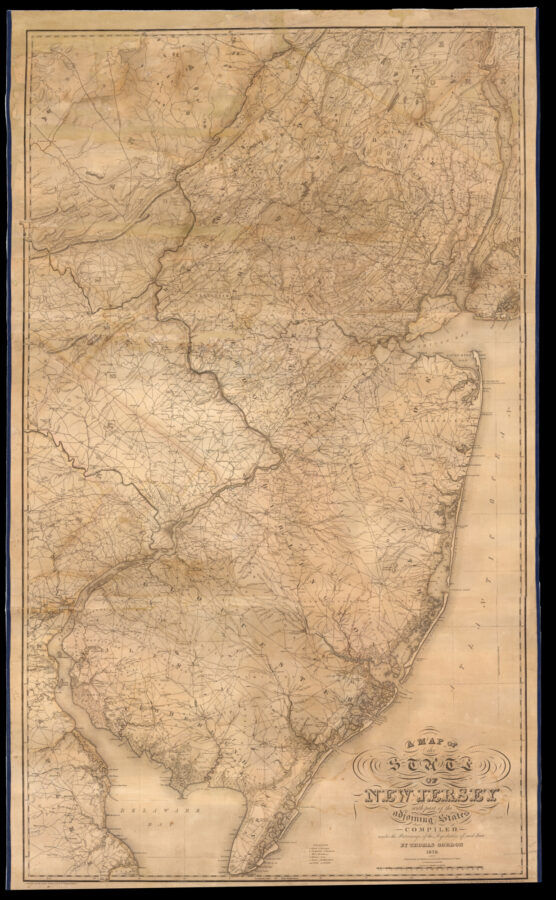 The first large-scale official map of New Jersey. In November 1822, ​‘An Act to encourage the formation of an accurate Map of the state of New-Jersey’, authorized a ​“loan of one thousand dollars to Trenton surveyor Thomas Gordon ​‘to enable him to procure additional surveys’ and to cover additional mapping costs. This high-quality map was the result. The legislature bought 125 copies for state offices, colleges, and counties and, in 1831, ordered another 125, sending one to each township… The engraver of the map, H. S. Tanner (1786–1858), was also a respected cartographer. His 1829 large-scale map of the ​“United States of America” is considered one of the premier early American maps, and for its New Jersey section he credited Gordon’s work:
​‘This portion of my map [New Jersey], as well as the adjoining parts of New York and Pennsylvania, is from the able and scientific map of Thomas Gordon, which is projected and drawn on a scale of three miles to an inch, and is exceedingly minute and particular. This admirable map, which must have cost its author much time and money, was compiled partly from surveys made by Mr. Gordon, combined with others collected by him during the progress of his work, and published in 1828…This, as well as every other good state map with which I am acquainted, has failed to reimburse the expenditure of its enterprising author; the spontaneous sales of the map, and the limited patronage bestowed on it by the Legislature of New Jersey, being, as I learn, entirely inadequate…State maps, or indeed local maps of any kind, whose sale must necessarily be limited, should be done by the public authorities’ ” (John Delaney, Nova Caesarea’, Princeton University, 2014).

The map improves on its predecessors in many ways, beyond its size: more roads; the addition of the Camden and Amboy Railroad, which links Philadelphia and New York, chartered in 1830 and completed in 1833, the state’s first railroad; the Delaware and Raritan Canal, begun in 1830, and completed in 1834; Columbia is now ​“Hopewell or Columbia” in Hopewell Township (Mercer County); and Slabtown is now ​“Slabtown or Jacksonville” in Springfield Township (Burlington County).

Gordon became the first librarian of the New Jersey Historical Society, founded in 1845.