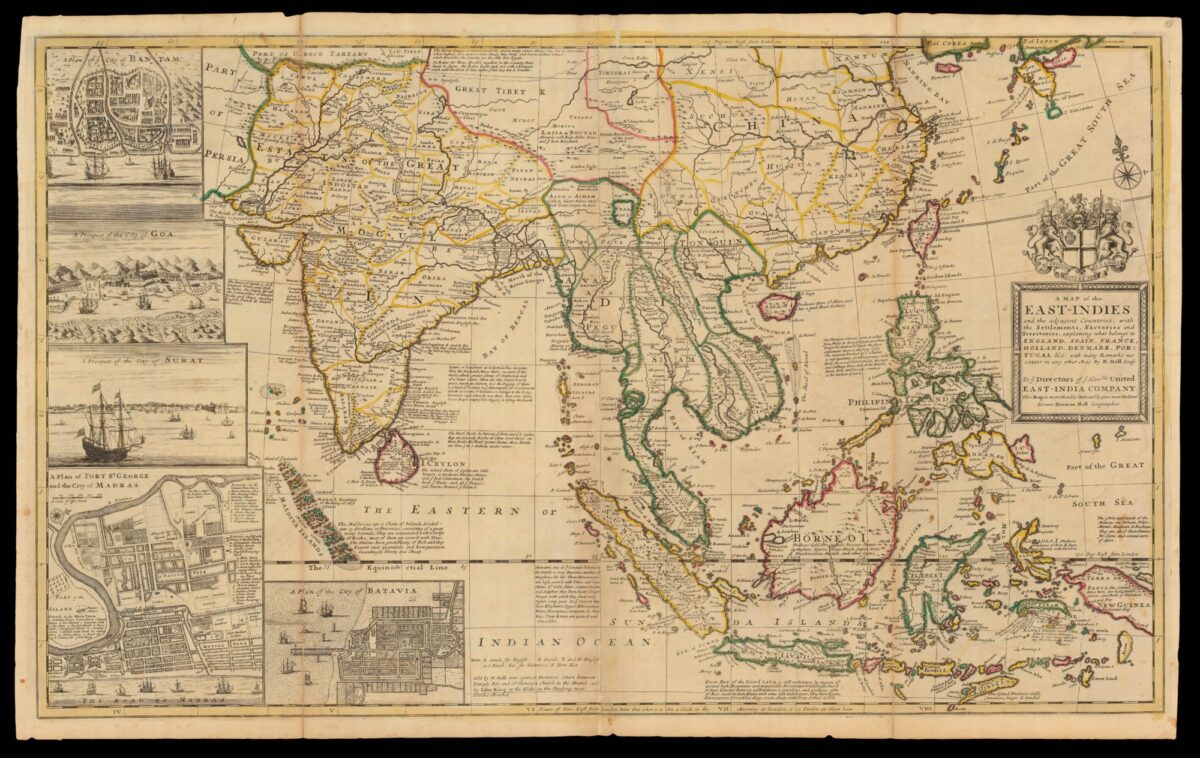 The first large-scale map of Southeast Asia published in England

A Map of the East-Indies and the Adjacent Countries; with the Settlements, Factories and Territories, explaining what Belongs to England, Spain, France, Holland, Denmark, Portugal &c with many remarks not extant in any other Map

Importantly, the map was the most popular and authoritative general cartographic representation of South and East Asia published during this period when the activities of the East India Company — EIC — had risen to the forefront of the economic life of the British Empire. The EIC was a private syndicate that was granted a charter by Queen Elizabeth I in 1600 that henceforth allowed it a monopoly on all English trade with the East Indies. By 1720, the EIC’s activities accounted for 15% of Britain’s total imports. Its activities were focused on the Indian Subcontinent, with its immense wealth in precious gems, gold, textiles, tea and saltpeter (the key element for making gunpowder).

The EIC gained its initial foothold in India in 1612, upon being given permission by the Mughal Emperor to open a trading post in Surat. Indeed, over a century later, Moll noted on the map, ​“The Town of Surat is of ye Greatest Trade and Note in India”. In 1634, the Company was given special trading privileges in the wealthy region of Bengal, the centre of the subcontinent’s lucrative textile trade. The EIC expanded its operation to the Coromandel Coast, founding Fort George (Madras) in 1639. By 1647, the Company had 23 factories spread throughout coastal India. The EIC’s ascendancy in the region reached a highpoint in 1668, when the Islands of Bombay (today’s Mumbai) were given to England by Portugal as part of Charles II’s wedding dowry.

However, in 1689, the EIC’s great era of expansion was endangered when English pirates attacked Mughal interests, to the great consternation of Emperor Aurangzeb. Mughal forces seized Bombay and threatened to drive the English out of India. Only skilled diplomacy averted what would have been a disaster for the English economy. The ECC placated Aurangzeb, and in 1690 were permitted to found Fort William (Calcutta) in Bengal, which later became the capital of British India.

Not long after this map was published, the Company’s horizons expanded further. In 1717, the Mughals granted the British an exemption from all customs duties in Bengal. Moreover, in 1711, the EIC opened up a massive new market when China’s Kangxi Emperor granted the Company rights to trade for tea and silver at Canton (Guangzhou).

While the EIC was preeminent in mainland India, the map also shows the territories controlled its competitors, notably; the Dutch who dominated Indonesia, the Malay Peninsula, Ceylon (Sri Lanka), as well as maintaining a post in Japan at Nagasaki; the Portuguese, who held several enclaves in India (notably Goa), as well as Macao in China; and the Spaniards who governed the Philippines. As noted on the map various European powers maintained factories along the Indian coastlines, although these enterprises did not seriously rival the ECC interests on the subcontinent.

Herman Moll, who was known as one of the era’s most commercially savvy mapmakers, devised the map as a celebration of the EIC’s success, in an effort not only to appeal to public interest, but to gain the patronage of the Company’s wealthy investors.

Herman Moll (c1654-1732) was one of the most important figures in the English map trade in the late seventeenth and early eighteenth centuries. However, very little is known about his background. It seems likely that he came from Germany, possibly Bremen, and was in London by 1678. He worked hard, had a substantial output of cartographic material, as engraver, mapmaker or publisher, such that one might assume that he had assistants or apprentices to help, but there is no evidence of this, and, after his death in 1732, the​“Moll firm” disappears without trace. His son Gilles Hendrick obviously predeceased his father, while the surviving daughter, Henderina Amelia Moll, is little more than a name on a will.

Moll first appears in 1678 as an engraver working on Moses Pitt’s​‘The English Atlas’ with Sir Robert Hooke, one of the patrons of the project. Moll later claimed that he was employed by Prince Rupert to assist them. Shortly after the Pitt atlas project failed, Moll tried to establish a business as a mapmaker, or​“Geographer” as he termed himself, but was unsuccessful. Much of his career was spent as a jobbing engraver for mapmakers and publishers, particularly in the book trade for people like James Knapton, providing the maps for their travel accounts. It was the availability of an engraver that gave the impetus to so many publishers to commission maps for publications, and may account for some of the success of such publications.

In 1707 Moll commenced work on his most famous publication,​‘The World Described’, a collection of two sheet maps of the world. It was one of the most famous English atlases of the eighteenth century, and long-lived; the atlas was completed in 1717; the maps, in other hand, were still being advertised for sale in 1796.

Moll was also fond of filling blank spaces on his maps, particularly those of​‘The World Described’ with text panels, often a commentary on the region depicted, but on several maps he was equally happy to vent his bile on rival mapmakers: the English partners Jeremiah Seller and Charles Price; the publisher and engraver or John Senex; and the French, notably Guillaume Delisle.

Moll was involved in a number of atlas publications: the​‘Thesaurus Geographicus’ (1695), re-issued in a number of other guises, and expanded to form the​‘Atlas Geographus’ (1711); his​‘Twenty Four New and Accurate Maps of the Several Parts of Europe’ (1706); and​‘A New Description of England and Wales’ (1724).

In his will, there is no mention of a stock of printing plates or other business assets. It is probable that much of the material he put his name to was owned and financed by others, with Moll as the creative influence and​“celebrity name” for the title-page. 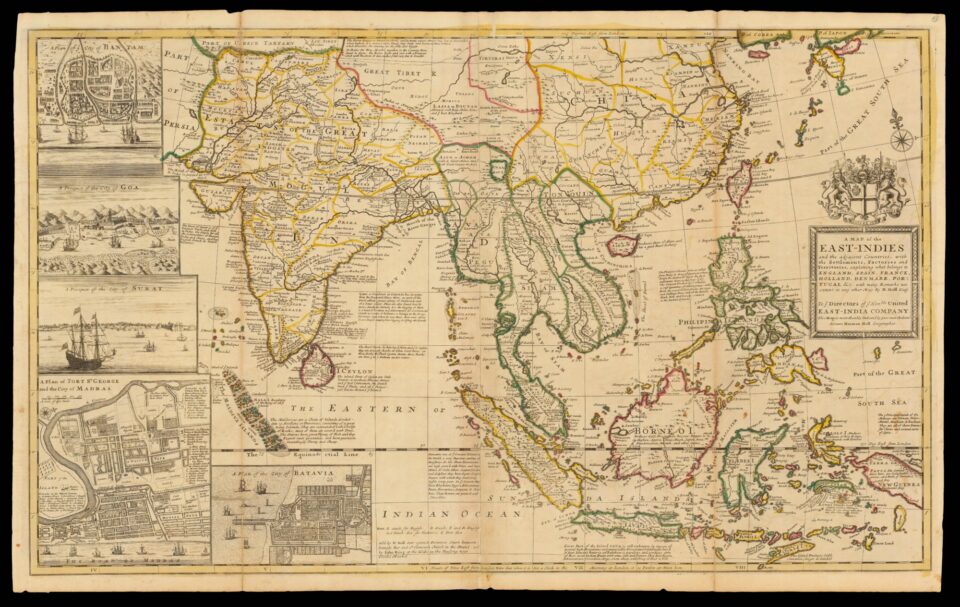