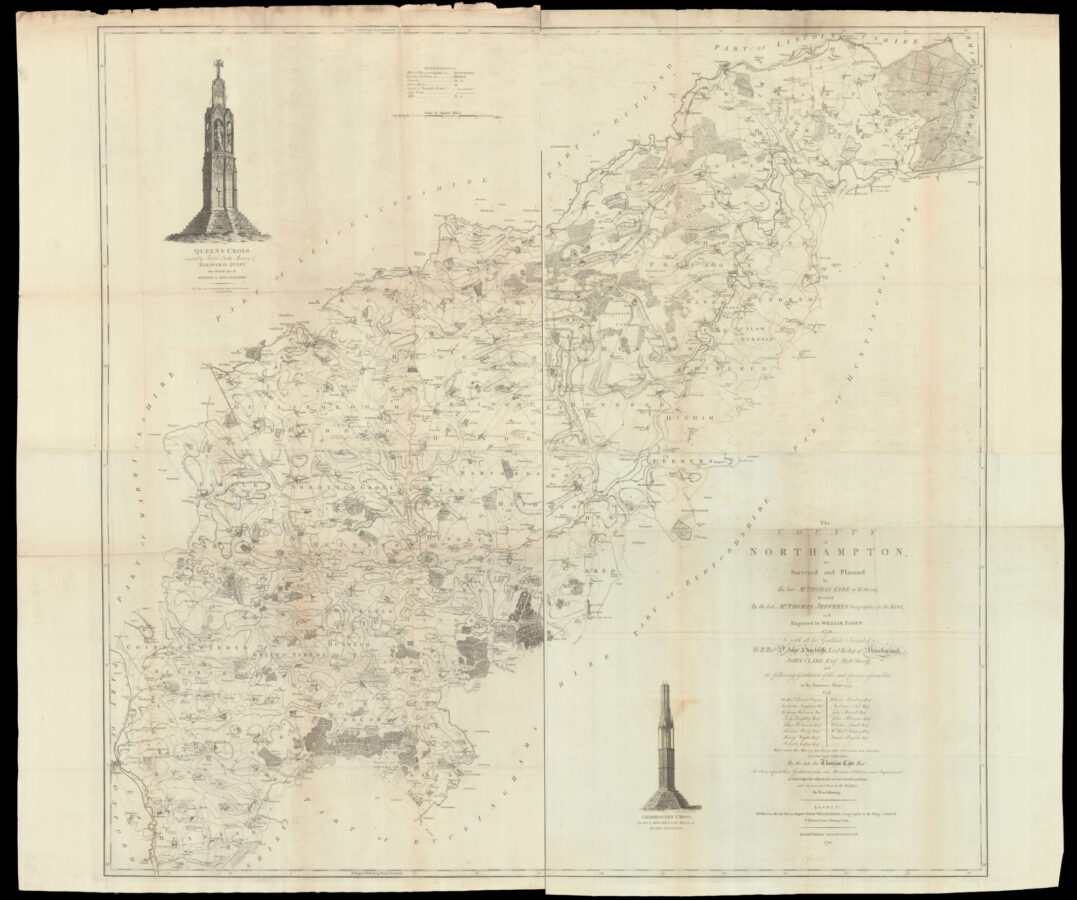 The first large-scale map of Northamptonshire

By EYRE, Thomas and Thomas JEFFREYS, 1780

The county of Northampton as surveyed and planned by the late Mr Thomas Eyre of Kettering revised by the late Mr Thomas Jeffreys Geographer to the King, and engraved by William Faden 1779 is with all due gratitude inscribed to the Rr. Revd. Dr John Hinchcliffe, Lord Bishop of Peterborough, John Clark Esqr. High Sheriff and the following gentlemen of said county assembled viz The honble. Edward Bouveric, Sir James Langham Bart., Sir George Robinson Bart., Lucy Knightley Esq., John Robinson Esqr., Thomas Powys Esq., Henry Wight Esqr., Rober Andrew Esqr., William Hanbury Esqr., Ambrose Isted Esqr., John Mansell Esqr., John Blencowe Esqr., William Lambe Esqr., Wm. Heny. Chauncy Esqr., Francis Beynon Esqr. Before whom this map was then laid for their observation and correction (previous to its publication) by the late Sir Thomas Cave Bart. at whose request those gentlemen made such alterations, additions and improvements in their respective hundreds as was found necessary and communicated them to the publisher the year following

This is the first large-scale map of Northamptonshire ever made, and displays the county in great detail. It shows its settlements, rivers, woodlands and estates, as well as the administrative divisions known as ​‘hundreds’ which were used up until the end of the nineteenth century. The title explains that the surveyor called upon gentlemen from the various hundreds to confirm that their respective regions were accurately represented. In addition to its cartographical features, the map is ornamented with enlarged illustrations of two ​‘crosses’ erected in the area by King Edward I to commemorate his wife, Queen Eleanor. Both are accompanied by notes explaining their location and purpose. During a period of industrial expansion when communications and travel were becoming more accessible, the demand for large-scale maps increased accordingly. These maps proved invaluable as navigation tools, and also became popular as collectible, decorative pieces. Coincidentally, the one inch to one mile scale used on this map makes it a forerunner of the Ordnance Survey maps launched the very same year.

This map was originally the project of Thomas Eyre, a surveyor, clockmaker and resident of Kettering, but he died before it was finished. In turn, Thomas Jeffreys took up the task, but died himself in 1771, meaning that it was finally completed by William Faden in 1780. Interestingly, the primary dedication is to John Hinchcliffe, a prominent scholar and churchman, despite no record of any strong link between him and the country. Instead, this dedication may stand as evidence of the patronage system that was of crucial importance for mapmakers (and craftsmen and artists of all kinds) during the eighteenth century. Roger lists Eyre and Jeffrey’s work as the first example of a large-scale map of Northamptonshire (328). Furthermore, it is extremely rare, with only two institutional examples, held at the Library of Congress and Spanish State Library, and appearing on the market only four times in the past 50 years.