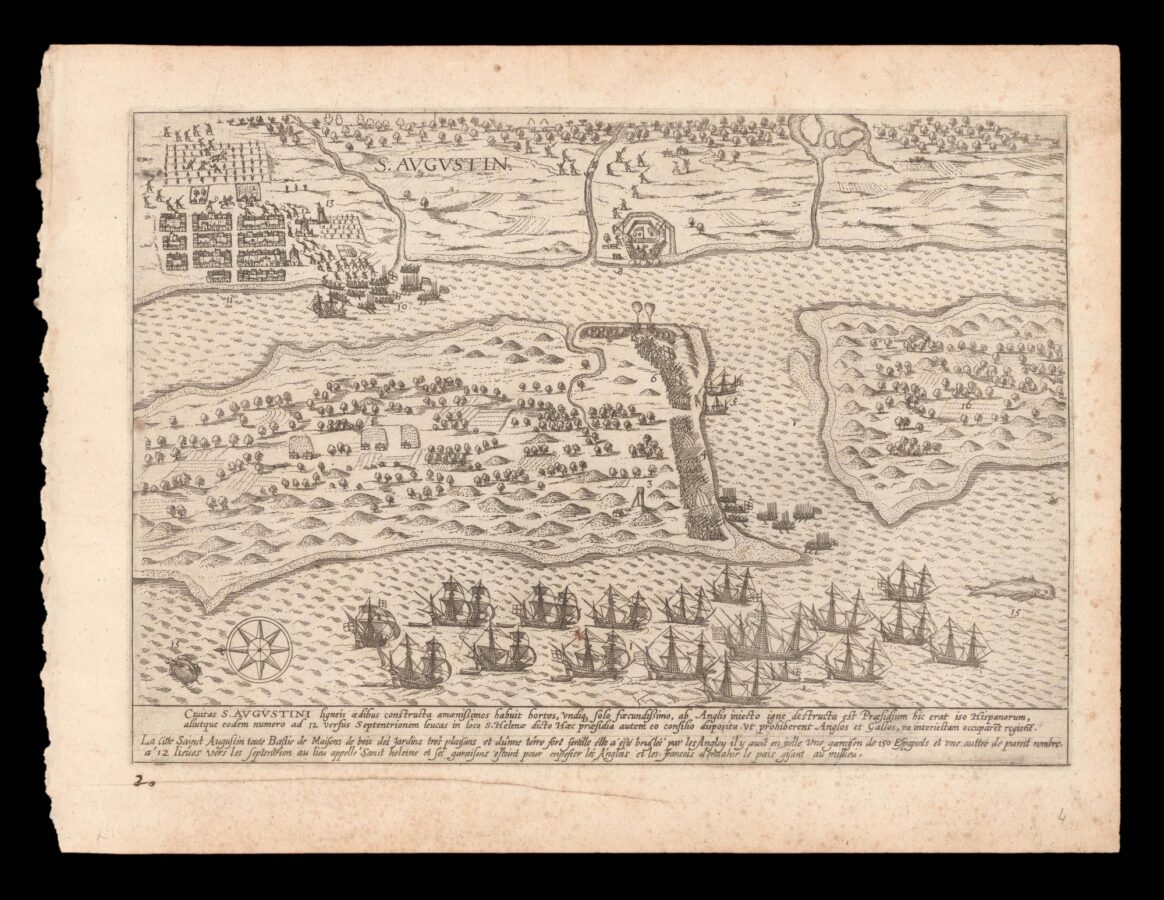 The present view of St Augustine, Florida (together with views of Santo Domingo in the Dominican Republic; Santiago in the Cape Verde Islands; and Cartagena in Columbia) were drawn, and probably engraved, by the Italian artist Baptista Boazio.

The Boazio views are ​“probably the most interesting and important published graphic work pertaining to Drake and his career” (Kraus). They are also the first representations of those four cities. Indeed, the view of St Augustine is the first known engraving of any locality in the present-day United States. Their history is uncertain. Having famously circumnavigated the globe between 1577 and 1580, Sir Francis Drake voyaged to North and Central America in 1585, where he ransacked many of the towns shown in Boazio’s engravings. There is no indication that Boazio participated to the voyage but he must have obtained a version of these views from someone who did:

​“It was undoubtedly in the course of the return voyage that the author of this view-plan [of St. Augustine] was able to copy the figure of the Dorado fish [and of the other creatures decorating the plans] from John White’s original drawings” (Kraus). John White was the Governor of the first English settlement in America, who along with the other surviving settlers returned to England from Roanoke Island with Drake’s expedition.

Two issues of these views were printed in Leiden in 1588, both extremely rare: a large paper issue (16.5 by 22 inches) was printed to illustrate Walter Bigges and Master Croftes, ​‘A Summarie and true discourse of Sir Francis Drake’s West Indian Voyage’ published in London in 1589; the present smaller size (7.5 by 11.25 inches) has captions in Latin and French and a numerical instead of alphabetical key, and was probably printed to illustrate the Latin and French translations of ​‘A Summarie and true discourse’, published in Leiden in 1588. While the pictures are broadly similar, the present examples show greater detail, whilst the larger ones include more sea monsters and other embellishments.

Priority regarding date of publication between those two issues has not been established with certainty but there are indications that the, present, smaller issue came first:
​“A close comparison of details, however, suggests that the smaller engravings come from an earlier set of drawings and that the larger maps represent revisions as well as embellishments, probably done by the same artist” (Mary Frear Keeler).
There were two subsequent issues of the smaller Boazio plates: the first in 1589, published in Cologne, used the same plates but with only the Latin text below; the plates themselves are set within the text, with printed text to the verso; the second, 1590, Nuremberg printing was neither printed from new plates or the plates have been heavily revised.

Only one complete set of the four large views has appeared in the last fifty years: the DuPont sale at Christie s in 1991 for $231,000. That particular set included a large map of Drake’s Atlantic voyage. A large coloured view of Cartagena was sold at Christies in 1996 for $16,100.
There is no record of any copy of the 1588 smaller size issue having gone through auction. In 1970, Kraus, p.156, estimated that they were eight recorded complete sets of the large Boazio plates and seven complete sets of the smaller plates (1588 and 1589).
OCLC records eight complete sets of the large plates, but only two complete sets of the small 1588 plates: New York Public Library, and the Huntington Library. There is an incomplete set (lacking San Augustine) of the smaller 1588 plates in the Kraus’ Sir Francis Drake Collection housed in the Library of Congress. Of the 1589 small plates we were able to trace nine complete examples.
A comparison of the present map with the plate in the Huntington Library, New York Public Library, and the Library of Congress confirm that the map is identical.