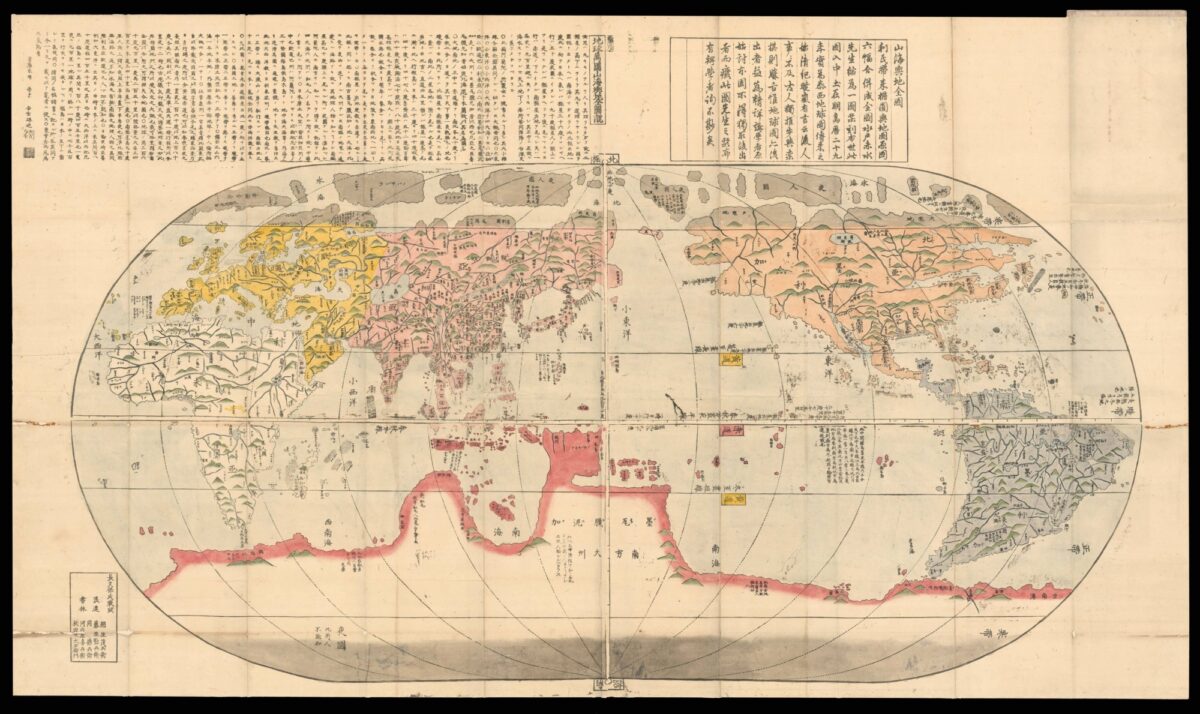 The first Japanese world map with latitudes and longitudes

Chikyū bankoku sankai yochi zen zusetsu 地球萬國山海輿地全圖說 [Comprehensive Map and Description of the Geography of the Myriad Countries of the Globe].

One of the earliest world maps made in Japan. A reduced hand-coloured copy with latitudes and longitudes based on Matteo Ricci’s (1552–1610) revolutionary world map, Kunyu wanguo quantu 坤輿萬國全圖 (‘Complete geographical map of all countries’) published in Beijing in 1602 .

Nagakubo Sekisui (1717–1801) was a Confucian scholar with samurai status, studied with Japan’s most famous astronomer’s disciples, and is considered the founder of the modern Japanese geography for his use of lines of latitude and longitude. World maps based on Ricci’s work had been made before Sekisui’s work, but were drawn by artists with no understandings of cartography. This map, famously credited to Sekisui, contains additions, corrections and improvements to Ricci’s map.

Geographically, Sekisui’s map is a faithful copy of Ricci’s map: it strictly resembles the proportion and shape of the continents, oceans, seas, and islands. However, he made significant improvement on the illustration of Japan and Kuril Islands. Sekisui in fact revived Ricci’s intended design, which was not realised at the time. Although Ricci recommended using different colours for the identification of the six continents, his own map was engraved and published monochrome by his friend Li Zhizao 李之藻 (1565–1630). Sekisui followed Ricci’s advice in colouring Africa in white, Europe in yellow, Asia in light red, North America in orange red, South America in dark blue, and the supposed border of Magellanica (The Antarctic) in dark red.

Most of the Chinese inscriptions were copied with extensive annotation and reading marks for the Japanese audience. For example, Sekisui added ​‘katakana’ which is used for transcription of foreign language words into Japanese, next to the hundreds of Chinese toponyms copied from Ricci’s map. This certainly made the map more easily understandable and accessible for his contemporaries. Alongside the geographical changes, Sekisui also added some text that seem to be justifying the inaccurate description on Ricci’s map.

Sekisui’s most significant improvements are made to the depiction of Japan and Kuril Islands, including the shapes of the islands and names of the provinces and roads. He substituted many incorrect place names around Japan on Ricci’s map with a few correct ones. For example, the northern most of Japan’s main islands is named as Hokkaidō (北海道) on Ricci’s map, and changed to Eso エソ by Sekisui. To the east of Japan, Sekisui also illustrated the two imaginary islands of Kinshima (金島, Isle of gold) and Ginshima (銀島, Isle of silver) that the Spanish and the Dutch desperately sought after during the seventeenth century. These two mythical islands were not depicted on Ricci’s map.

A critical section of Sekisui’s map is the explanatory text at the top, which contains about 1450 Chinese characters in the style of ​‘Kanbun’ (a technique for making Chinese texts read like Japanese), in 69 columns, with kunten (訓點, guiding marks) for his Japanese readership. Existing scholarship considers Sekisui’s text not a translation but a sophisticated adaptation, particularly concerning Japan itself. By adopting the new concepts of latitude and longitude – the latter allowing for the calculation of time-difference — Sekisui was able to clarify the position of Japan in the world.

As a result, Sekisui successfully promoted new concepts which resulted in a changing vision of the world; many more editions of his map were published up until the mid-19th century.