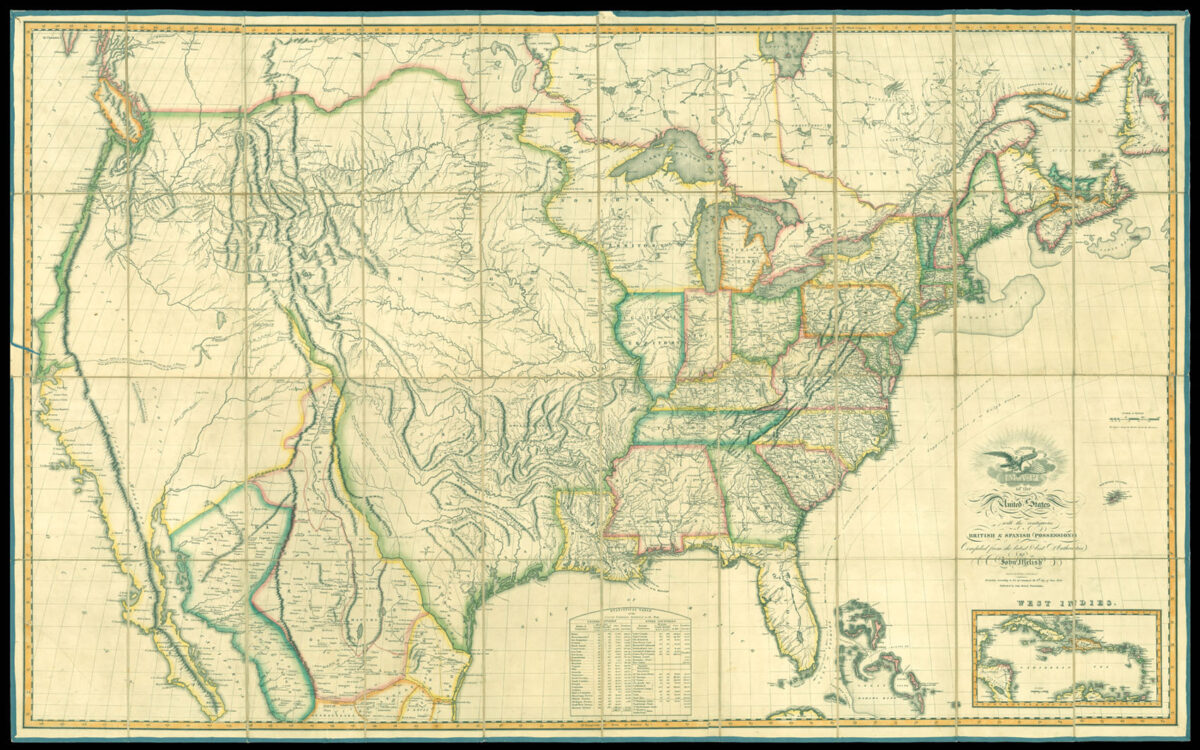 Map of the United States with the Contiguous British & Spanish Possessions.

John Melish’s map of the United States is the single most important and influential map of America published in the 19th Century and is rivaled only by John Mitchell’s map of North America in 1755 as the single most influential map in American History. Described by Thomas Jefferson as a luminous view of the comparative possessions of different powers in our America, Melish’s map, first issued in 1816, was the first indigenous attempt to map the United States from coast to coast and synthesized the works of Lewis & Clark, Humboldt, Pike, Arrowsmith and others for the first time in a single large format coast-to-coast mapping of the United States.

Melish’s map stands alone in the history of 19th Century American Cartography. Much as Mitchell’s map influenced boundary disputes and treaties in North America for nearly a century after its publication, the Melish map similarly became the essential source map for the 19th Century. It has been described by several commentators as the visual embodiment of Manifest Destiny to an American public searching for a graphic depiction of America’s territorial acquisitions from coast-to-coast in the early 19th Century.

Following the Louisiana Purchase, Americans turned there attention westward to the great expanse from the Mississippi River to the Pacific Ocean. While the explorations of Lewis & Clark and Zebullon Pike provided early regional snapshots of previously unknown regions in the West, it was left to Melish to tie together these works, along with Arrowsmith’s map of Mexico and other available sources, into the first systematic and comprehensive map of the US.

Prior to his map of the US, Melish had produced a number of other highly acclaimed regional maps and his rare Military & Topographical Atlas of the United States. However, this map of the US would become his masterwork, ultimately reissued in 25 known states of the map between 1816 and 1823. The map, in its various editions, faithfully recorded the changing geography of the US, as various boundary disputes, treaties and explorations extended both the geographical territory of the US and a young nation’s knowledge of its own territory.

The most notable feature in this edition of the map is the addition of Alabama Territory, which was not formally established until March 3, 1817.