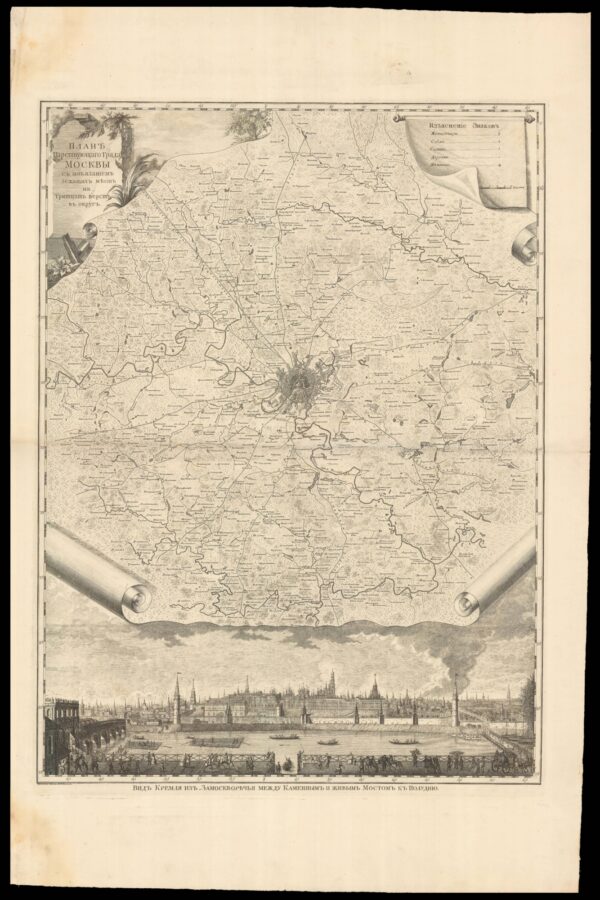 The first plan of Moscow to combine an aerial view of the city, a map of its environs and a panoramic view of the urban centre, in this case showing the Kremlin.

The plan at the centre of the map is based on the first geodesic plan of Moscow, which had been compiled in 1739 by a team of surveyors led by the architect Ivan Michurin. It focuses on the urban area within the Kamer-Kollezsky Rampart, which was being constructed contemporarily and which in 1806 became Moscow’s police border. The surrounding map expands ​“thirty versts”, or roughly 50km, from these boundary; it thus covers the entirety of modern-day Moscow. All settlements, private land, monasteries, churches and windmills are marked on the map, as are rivers and their tributaries, roads and highways, such as the Zvenigorodskaya Road, nicknamed ​‘the Tsar’s road’ because of the fashionable districts alongside it. Private estates appear across the map, many of which were demolished as the city expanded during the nineteenth century.

Beneath the map, which is presented with furled edges in trompe l’oeil style, is a panorama of central Moscow drawn by Mikhail Makhayev after a 1707 engraving by Pieter Picart, with a slight omission. The view shows the Kremlin and Moscow River from the south, with boats and rafts on the water, and lively scenes with carriages, horses and passers-by on the Zamoskvorechye embankment in the foreground. In the upper corners, the map’s title and legend appear in ornate cartouches decorated with tree branches, reeds and leaves. It is often known as the ​‘Lomonosov’s plan of Moscow“ ‘, after the prominent Russian scientist and writer under whose supervision it was published at the Imperial Academy of Sciences.