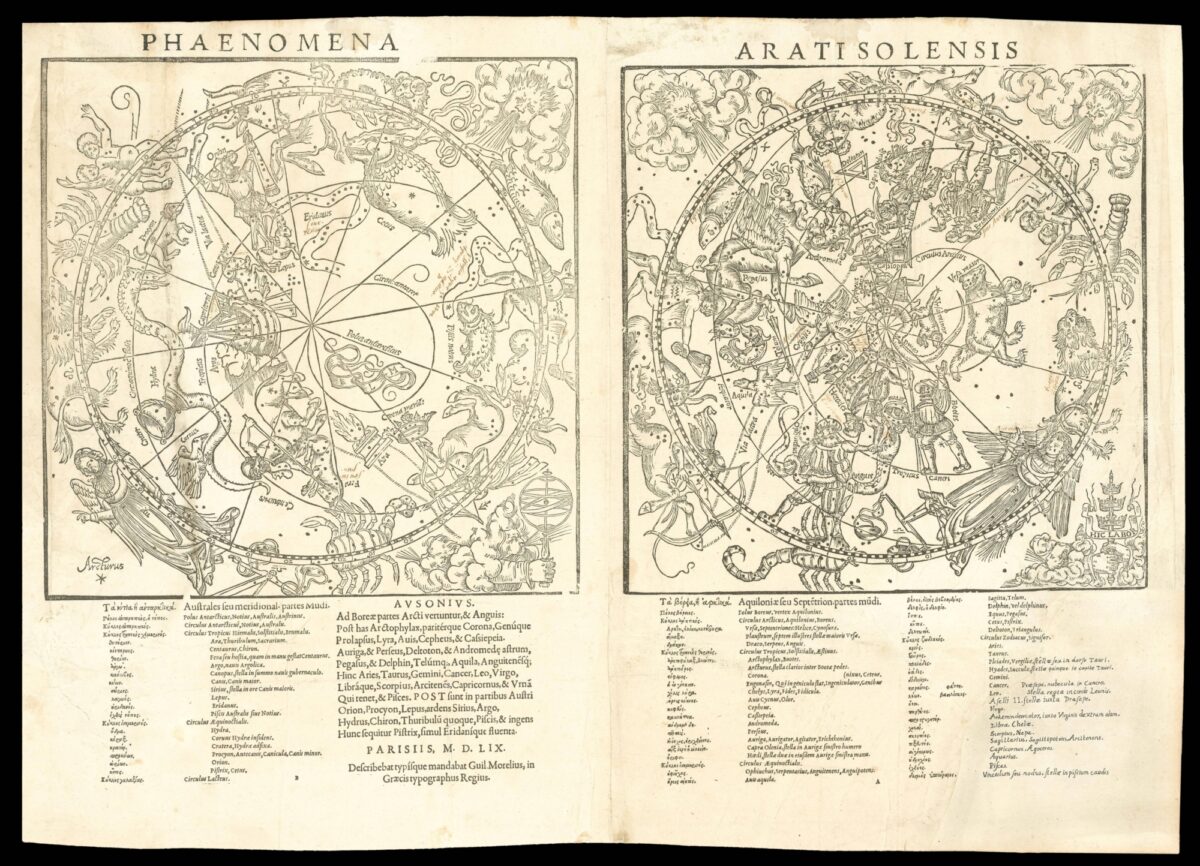 By HONTER, Johannes and MOREL, Guillaume, 1559

Johannes Honter was a cosmographer, cartographer and humanist from Kronstadt. The Swiss editor Henri Petri commissioned to him the task to illustrate in two boards the constellations described by Ptolemy in the seventh and eighth book of the Almagest. The two boards were published in the Ptolemy complete works edition, Omnia, quae extant opera, Geographia exepta, published in Basle by Henri Petri in 1541. The two boards, measuring 25cm in diameter, are in stereographic projection and depict the Almagest stars until the sixth magnitude. The stars are not graded and are wrongly positioned, as can also be noted from the meeting of the Ecliptic with the Equator; the mistake is evident both for the year of production, 1532 (almost 30 degrees of longitude), and also for the coordinates given by Ptolemy at his time. The author was inspired by the boards by Durer and by those for the Wien manuscript of 1440. However this is the first time that the constellations are represented in concave projection and some, such as Auriga, Boote and Perseus – in strong contrast with the previous tradition – are dressed in contemporary costumes. On the centre of the two boards are the projections of the 2 ecliptic poles; therefore their perimeters represent the Zodiac circle and the constellations are depicted on both maps. We also find the projection of the two terrestrial poles, the polar circles, the tropics and the Equator. The longitude lines are represented by 30 degrees cloves, and can be read with the precision of one degree. The boards themselves – with some slight variations – were used in the Hieronimus Gourmontius typography in Paris to illustrate a work of 1552. The work by Arato which was published in Paris by Guillaume Morel in 1559, ​‘Arati Solensis, Phaenomena et prognostica’ is illustrated with two woodcuts which take references from the Honter boards apart from some variations regarding the planispheres’ frames. Morel’s map is accompanied by a list of constellations in Greek and Latin and by another list in agreement with the Ausonius interpretation. The cartouche within the Polus antarticus circle bears the initials L M. Rarissima.

​“Whereas Durer’s maps … showed the stellar universe as from the outside, Honter’s were the first important printed maps showing the stars as seen from the earth.”