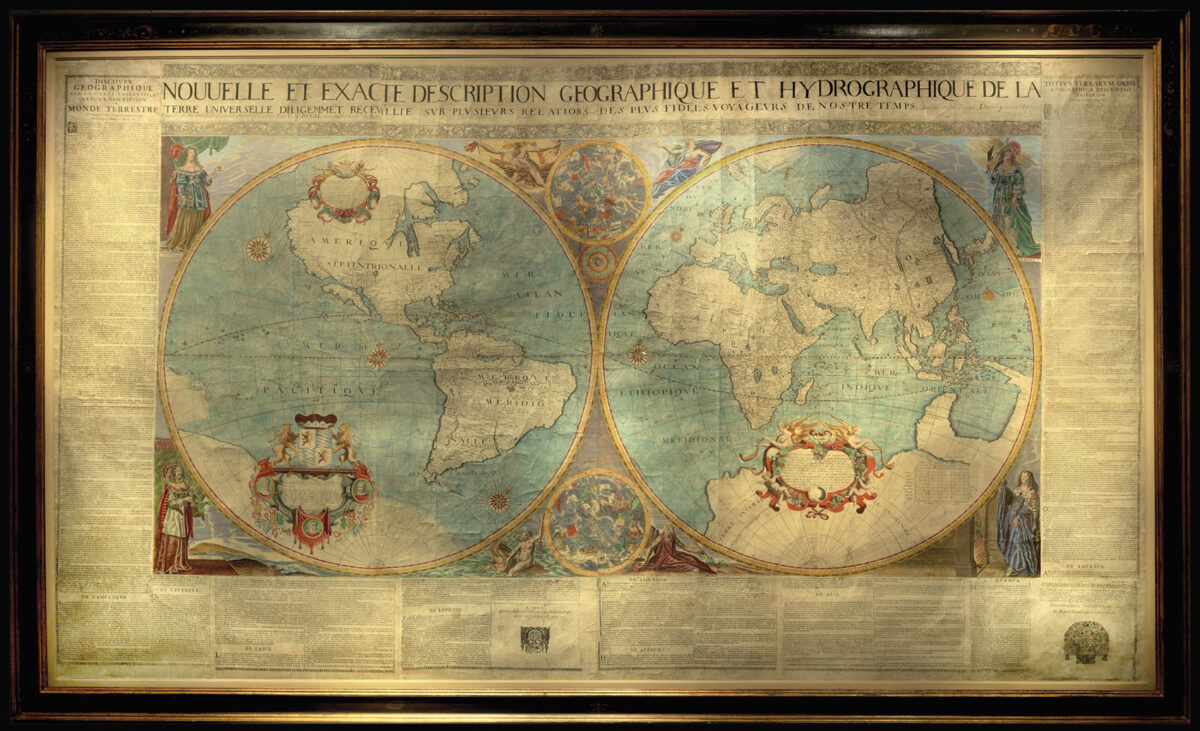 In 1643 Boisseau had been responsible for ​“the first true world atlas produced in that country [France]” (Burden), the ​‘Trésor des carte géographique’; soon after its publication he started work on the present monumental map, the first French double-hemisphere wall map, publishing it in around 1645. ​“The design and engraving of Boisseu’s map is of the highest standard” (Shirley), and is replete with the latest cartographic information; Brouwer’s 1643 route round Terre del Fruego is marked ​‘Passage de Browers 1643’; upon Australia’s east coast Boisseau lists the Dutch landings; these include (Concorde 1616, Edels 1619, Lewin 1622, Nuitz 1627). California is displayed as an island, however, it differs quite substantially from the contemporary Dutch maps, with the channel between California and America taking a more easterly direction. The cartography of the east coast being reminiscent of Henricus Hiondius’s map ​‘America…’ of 1618.

The map bears several cartouches: to lower left is an elaborate dedicatory cartouche, surmounted by the coats-of-arms of the Rhineland Palatinate, and flanked by cameos of the circumnavigators Edward Cavendish, Francis Drake, and Ferdinand Magellan. The map is dedicated to Prince Edward of the Rhineland Palatinate (1625–1663), and Prince Philip of the Rhineland Palatinate (1627–1650). The princes whose father Frederick (1596–1632) was Elector Frederick V of the Palatine of the Rhine, and King of Bohemia — spent a great deal of their formative and adult years in and around the Dutch and the French court, having being exiled from their lands by the Holy Roman Emperor in 1622. Edward settled permanently in Paris in 1645 having married Anna Gonzaga the daughter of the Duke of Mantua.

To the lower right within a cartouche is an explanation of latitude and longitude, and to the upper left is a description of the New World.

To the four corners are personifications of the four seasons in the guise of young women of the court: to the upper left spring holds a flower; upper right summer bears a fan and a sickle; lower left, autumn bares the harvest and a glass of wine; whilst in the lower right winter warms herself next to an open fire. The four elements are represented by four Roman gods: fire — Jupiter; air — Juno; water — Neptune; and earth — Gaia. Finally, to the upper and lower centre of the map are two celestial charts of the northern and southern hemispsheres.

The present maps bears the imprints of the geographer Pierre Duval and the engravers Francois and Gerard Jollain. It is uncertain of the exact history following the first edition of the map. It would appear from the surviving examples that the map came into the possession of Francois and Gerard Jollain at some point during the late 1650s. We have little information on Jean Boisseau we have some evidence to suggest that he stopped publishing maps at some point around 1657. At this point Francois replaces Boisseau’s imprint at the end of the dedcation with his own. Not being cartographers themselves they must have a some point have enlisted the services of the then Geographer to the King Pierre Duval whose name appears on the newly added title banner along with a reference to the addition text to the side and the lower margin. The text on the present map again bears Duval’s imprint as author, and also includes that of Francois Jollain’s father Gerard.

Rare we are only able to trace one institutional example of the 1672 edition with the accompanying text. The Bibliotheque Nationale de France hold the only recorded example of the first state, with the imprint of Jean Boisseau, but without the text. Later states with the dedicatory imprint changed to Francois Jollain, and with the addition of the banner title with Duval’s imprint are recorded at the Rijkmuseum ​‘Nederlands Scheepvaart Museum’ Amsterdam, and at the Houghton Library Harvard (with text to right and left border); the Yale University Library, example would appear to correspond with the present example; with the surrounding text bearing the imprints of, Pierre Duval the date 1672, and that of Gerard Jollain at ​‘rue Saint Jacque a la Ville de Cologne’.