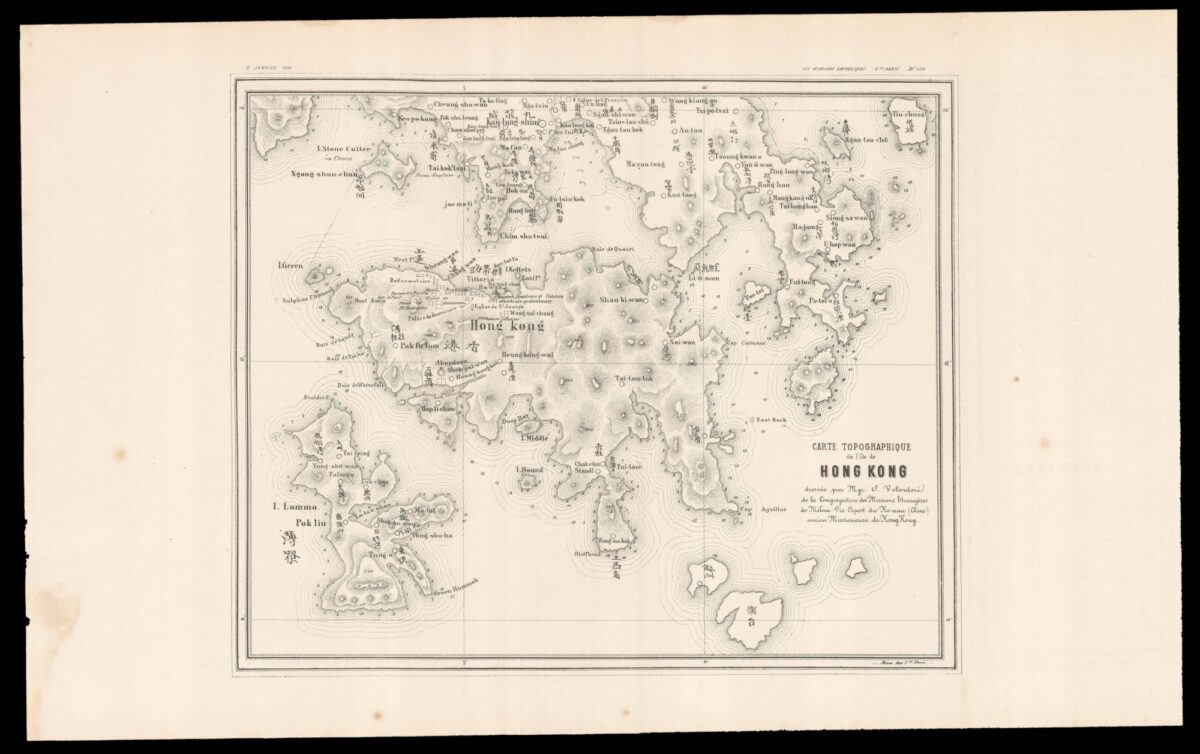 “The First Ever Bilingual Map of its Kind”

A rare map of Hong Kong, drawn by Monsignor Simeone Volonteri (1831–1904), during his ten-year residency in Hong Kong as a missionary.
Monsignor Simeone Volonteri (1831–1904) joined the Mission of the Propaganda in the Roman Catholic Diocese of Hong Kong in 1860. He remained in Hong Kong until February 1870, leaving shortly after his appointment as Bishop of Honan. Volonteri is credited with two significant maps of Hong Kong, namely his Map of the San-On District, and the present map, ​‘Carte Topographique de l’ile de Hong Kong’, published in 1866 and 1874 respectively. The latter appears to be a revised edition of the former, being more focused on Hong Kong and environs, with additional detail and new information, published with its own geographical text.
Volonteri worked in Hong Kong for ten years. He started the mission in Sai Kung, with plans to expand further into the mainland. With his health failing, he was advised to do more exercise and spent the next four years travelling the district, during which time he made a topographical survey and gathered geographical information, culminating in his map of the San-On District.
Volonteri’s work can be recognised as cornerstone for subsequent maps of Hong Kong, as it remained the most important cartographic representation of the region for the next 35 years, until the Survey of Hong Kong and the New Territories in 1901. Ng notes:
​“Considering the difficulties presented by the rugged terrain and the unsettled times under which the observations were made, the map has a remarkable degree of accuracy and contains a wealth of information. Although it cannot be ascertained whether Mgr. Volonteri had received any cartographic training, either before or after he entered the priesthood, the map displays no sign of amateurism and, indeed, it won several enviable awards in various European exhibitions, including the Milan Cartographic Exhibition of 1894 in the years immediately following its appearance. Other things apart, the fact that it is probably the first ever bilingual map of its kind must place it in a class of its own…
Published in 1866 Leipzig in an edition of 200 copies in English, the map was of great importance. So detailed was the map that it was used by the British authorities as important geographical reference material until after their lease of the New Territories and the Survey work on 1901. The map shows place names in both Roman and Chinese scripts. The boundary of the British colony of Hong Kong is shown in Kowloon; this peninsula had been added to the colony of Hong Kong in 1860. The Hong Kong Government immediately saw the value of this map, and publicized it by way of a notice in the Government Gazette on May 26, 1866.
This second map by Volonteri is scarcely recorded. Published several years after he left Hong Kong, it was printed in Milan by Stab. Fratelli Tensi in January 1874, for the Society for the Propogation of the Faith, in Volume 6 of Les Missions Catholiques. It was printed to accompany an article on the geography of Hong Kong written by Volonteri, who by that time had risen to become the Bishop of Honan.
There are clear differences between the two maps. The existence of the map was apparently unknown to scholars until the 1973 article ​“Another Volontieri Map?” was published in the Journal of the Hong Kong Branch of the Royal Asiatic Society, with the author noting ​“This map appears to be an individual production additional to the map of the San-On…”
By comparing the two maps, we can identify that more place names and buildings are added in the Victoria area on the present map: the Church, or Eglise de S. François, is added in the northernmost centre of the map; the Prison Anglais (English Prison) is shown on Ngong-shun-chau island, west of Kowloon.
The map is extremely rare. We are unable to find any other examples on the market in the past 30 years.