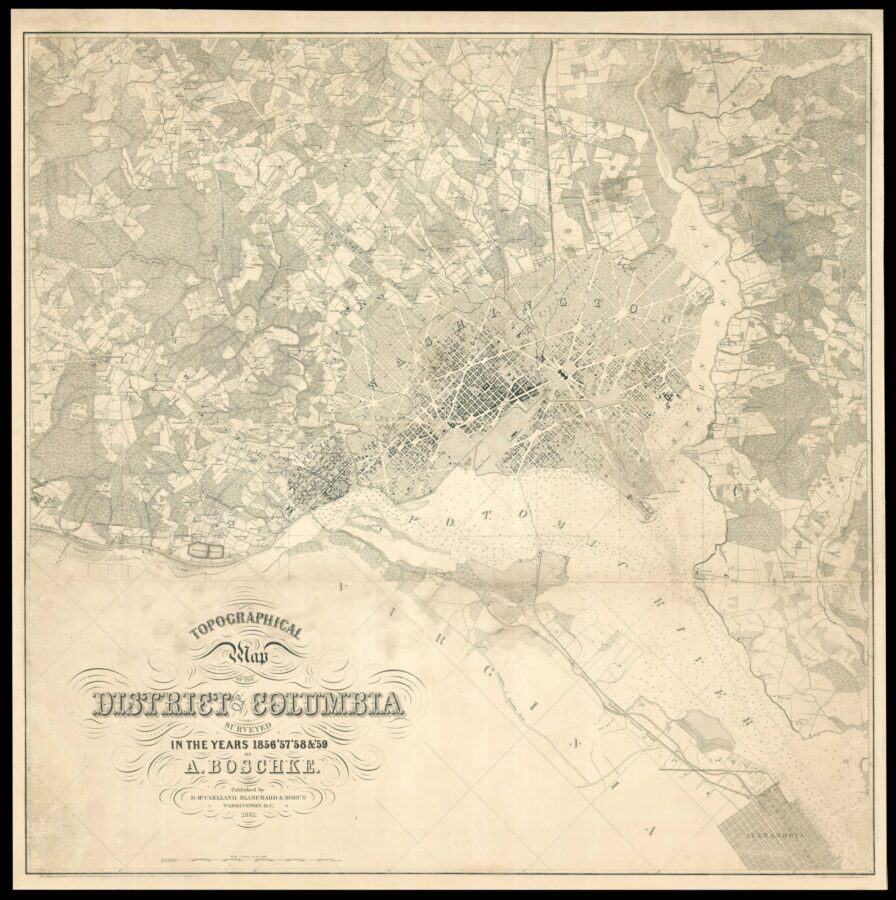 The first detailed survey of D.C. and her environs

Albert Boschke (1823–1910) was a Polish-born civil engineer who worked for the U.S. Coast and Geodetic Survey in Washington, DC, from the mid 1850s onwards. It was whilst working there that he conceived the idea of making a highly accurate map of Washington and of the District of Columbia, with the hope of selling it to the Government as well as privately. He organized and employed a group of surveyors to do the fieldwork at his own expense. His grand project would eventually cost him his job.

Two maps appeared from his labours, a large four sheet map of the city in 1857 and another large map of the whole District in 1861, (the present example). The map is amazingly detailed. Drawn on a scale of four inches to a mile, it was by far the most accurate map of Washington yet produced. It documented the location of all buildings, both private and public. Each structure was drawn from actual tape-line measurements that had been made in the field. The roads were measured by two parties, one with transit and chain, the other with a level. On the outskirts of the city roads, rivers, creeks, farm and wooded lands along with property lines with owners names are given; as well as contour lines.

The map was drawn and engraved in the style of the charts issued by the U.S. Coast and Geodetic Survey. This map ​“was engraved upon copper by Mr. David McClelland, and was just about to be published—indeed, a few copies or proofs had been printed—when, the war breaking out, the Government seized the map and plates.” (Baker) This was done for two reasons, because the Union did not have a good map of the region and so that it would not be obtained and used by Confederate forces.

​“At the outbreak of the war the United States had no topographic map of the District, the only topographic map existing being the manuscript produced by Boschke. He sold his interest in it to Messrs. Blagden. Sweeney and McClelland. Mr. McClelland is an engraver, now seventy four years old, living in Le Droit Park. He engraved the Boschke map, which was executed on two plates. With his partners, he agreed to sell the manuscript and plates to the Government for $20,000”.

​“Secretary of War Stanton, not apparently understanding the labour and expense of a topographic map, thought that $500 was a large sum. There was, therefore, a disagreement as to price. After some negotiations, Mr. McClelland and his partners offered all the material, copper-plates and manuscript, to the Government for $4,000, on condition that the plates, with the copyright, should be returned to them at the close of the war. This offer also was refused. There then appeared at Mr. McClelland’s house in Le Droit Park a lieutenant, with a squad of soldiers and an order from the Secretary of War to seize all the material relating to this map. Mr. McClelland accordingly loaded all the material into his own wagon and, escorted by a file of soldiers on either side, drove to the War Department and left the material. While the war was still in progress, after further conference, Secretary Stanton agreed to refer the question of payment for this property to the Committee on War Claims. That committee recommended a payment of $8,500, and the owners, regarding this amount in cash as worth more than future uncertainties, decided to accept it. Thus all the material became Government property at a cost of $8,500, and the plates, two in number, are now in possession of the War Department.“