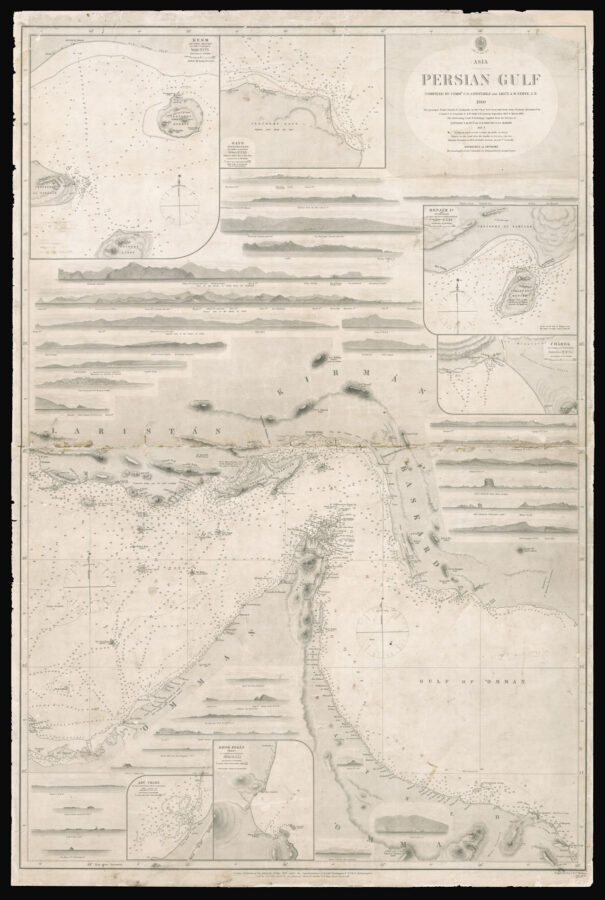 First edition, eastern part, of the most important chart of the Arabian Gulf since Guy and Brucks surveys of 1821–1828, and one of the most important charts of the area published in the nineteenth century.
The resurveying of the Arabian waters had begun in 1844, when Captain Sanders began surveying the peninsula’s south-eastern coast. He was ably assisted in this endeavour by Lieutenant Constable, who had joined the service in 1839. His time under the command of Captain Sanders had left him with a lifelong interest in the Arabian waters and especially the Gulf. After serving time in Egypt, he returned to the Indian Navy in 1850, where he was employed in surveying the south-western coast of India. During his time, Constable had continued his interest in the Arabian Gulf and ​“his knowledge of every creek and inlet was so profound as to have passed into a proverb among his fellow officers” (Low). On 21 February, he read a paper before the Bombay Geographical Society, entitled ​‘Memoir relating to the Hydrography of the Persian Gulf and the knowledge we possess of that sea’, in which he pointed out the numerous errors in the surveys of 1821–1828, made by Captains Guy and Barnes Bruck. The paper brought him to the attention of the Indian Government and, on 11 November 1856, he was attached to the Persian Expeditionary Force, as a surveyor aboard the ship Euphrates.
On the conclusion of the First Anglo Persian War (April 4th, 1857), Constable was ordered to correct the survey of the Gulf, which occupied him from April 1857 to March 1860, with Stiffe as assistant surveyor.
The two men were incredibly thorough, not only taking detailed readings, soundings, and sketches of the Gulf’s coastline, but also: ​“To ensure perfect accuracy in the identification of places by their Arabic names, Lieutenant Constable made a practice of proceeding on shore at every town and village on the coast, calling upon the Sheikh, or headman, from whom he would request information; these chiefs, more familiar with the use of the sword than of the pen, would invariably call in theit meerza, or secretary, who, with ​‘cullumdaun’ at waist, would transcribe in the book the Arabic name, or names, of the places under his lord’s domination.” (Low).
The local rulers, Constable writes, ​“treated us with the upmost kindness, giving us room in their house, with carpets and pillows to sleep on, and food has been cooked for us. Never has any objection been made to our surveying operations, but every facility afforded”.
In March 1860, Constable arrived at Bombay, where he set about completing the chart, which would be published by the Admiralty in 1862. The chart was so well received that Admiral Washington, then Chief Hydrographer to the Navy, sent the chart to the International Exhibition of that year as a fine example of English chart making. Low suggests that Constable’s gift for draughtsmanship was due to his illustrious father, John Constable, the English landscape painter.
Regardless of the origins of Constable’s talents, the chart portrays a clarity and economy found on the best charts of this period. The number of place names speak of his numerous trips ashore. Both Dubai (Debay) and Sharjah (Shargeh) are marked, and Abu Dhabi (Abu Thabi) warrants a large inset plan. The plan, the first detailed survey on any chart, depicts sand banks, and numerous soundings; to the shore, a fort is marked, together with the legend ​“Town built of Date Mats”. Constable also shows the coast in profile with, to the left ​“masts of native craft”, the fort in the centre, and the mountains of Jebel Hafeet (Jebel Fateshi) to the right. Later editions would modify the legend to read ​“Town built chiefly of Date Matts”, and although the spelling of Abu Dhabi remained the same, that of Dubai was amended to Dabai; and Sharjah to Sharja.
Constable’s work became the standard chart of the Gulf for the next fifty years.

Rare. Copac records an example of the first edition in the British Library; the National Maritime Museum record an edition dated 1867. The Al-Qasimi collection contains a reduced version of the chart.