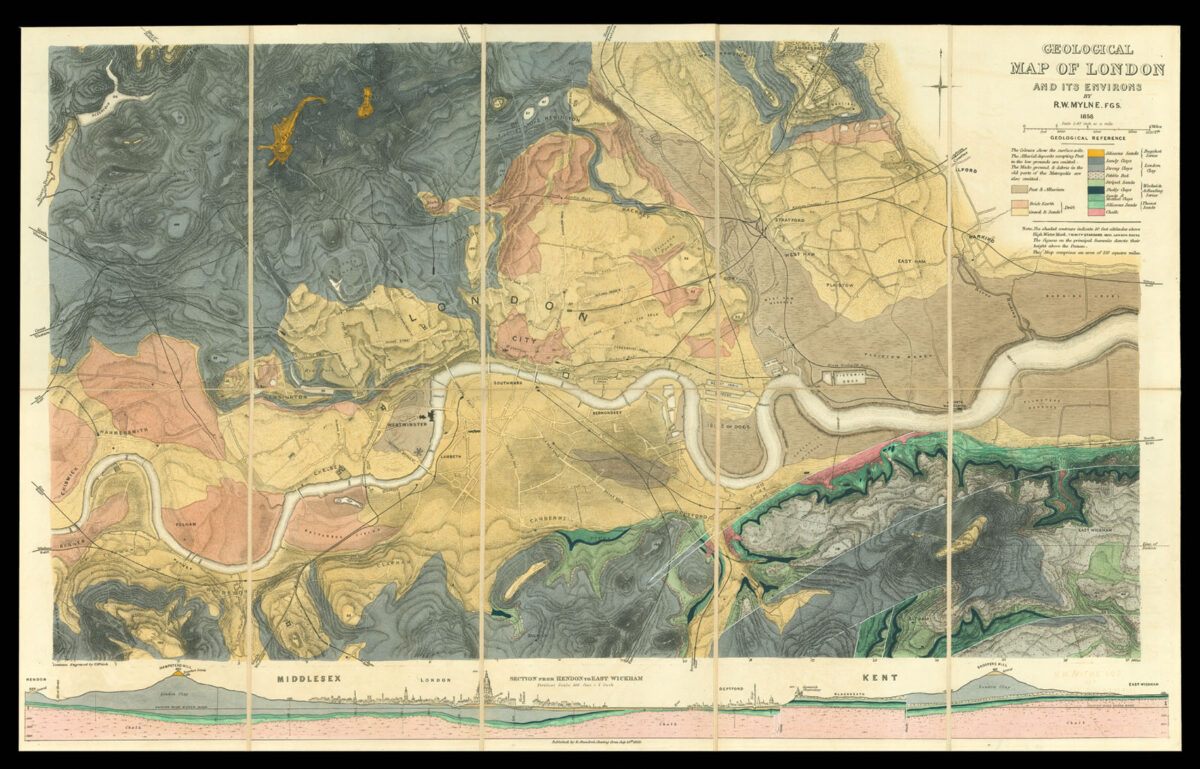 Geological Map of London and its Environs

Robert Mylne (1816–1890) was from a dynasty of distinguished Scottish architects, geologists and engineers; his grandfather designed the first Blackfriars Bridge. His work on water supply and geology earned him a fellowship to the Royal Society in 1860.

Mylne produced a block plan of the area around London to show the geological layers for his 1850 work ​‘Sections of the London Strata’, published by James Wyld. He used this as the basis for his 1851 ​‘Topographical Map of London and its Environs’, the first comprehensive geological map of London and the first with contours. It only uses landmark buildings, the junctions of main roads and railway lines to orient the viewer. The present example is the third edition, where the title has been altered to ​‘Geological Map of London and its Environs’, and a diagram has been added at the bottom showing a cross-section of the land from Hendon to East Wickham, with the height above or below sea level given by London landmarks: Hampstead Hill, St Paul’s Cathedral and the Greenwich Observatory. James Wyld published the first edition; Edward Stanford published this and all subsequent editions. The ​‘Geological Map of London’ remained in print until the early 1870s, and was only surpassed by the Geological Survey’s publications in that decade.

Mylne’s map was published during a period of change in understanding of public health and urban planning. His expertise was in water supply; his paper on artesian wells was one of the works cited in his Royal Society nomination and he was engineer to the Limerick Water Company. Detailed geological surveys were key to tackling contemporary sanitation problems. There was already a growing body of cartography that dealt with statistics and the social environment, like Henry Chadwick’s 1842 map showing the levels of sanitation in Leeds. Surveys like Mylne’s could have a significant social impact; the year after the map was published, work began on Joseph Bazalgette’s sewer system, a pioneering exercise in public sanitation. The geological composition of the site for the proposed sewer network was important in planning its construction.